NEWSFLASH: Have you seen all our new Rapunzel Printable Party Freebies? GO SEE! 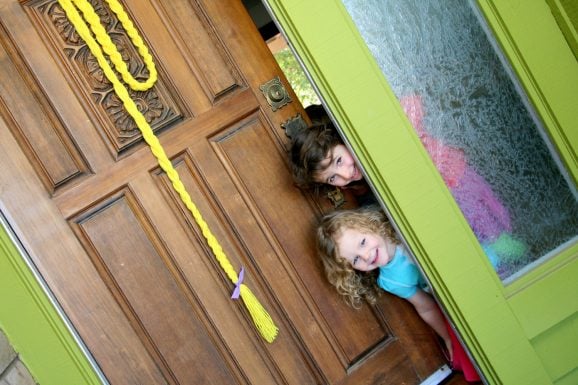 I’m pleased to report that Attalie’s Tangled Birthday Party on Friday night was a big success! How do I know? Because Attalie said it was the best birthday party ever. (Now there’s a supermom moment!)

Well I was originally planning to share all the details with you today, but there is just too much good stuff to share, and today’s post is already crazy long. So today I focused on our Rapunzel birthday party decorations and party food ideas, then tomorrow I’ll share all our ideas for Tangled birthday party activities, games and party favors.

To greet our guests, we made a larger version of the Rapunzel braid featured on the Tangled Tower Birthday Party Invitations. A couple of the guests told me they could see the braid from the street as they drove up to our house. Isn’t that fun?!

For the invitation braids we used embroidery thread, but for this giant one we used yellow yarn. As I was trying to write out the instructions, I realized it sounds a bit confusing, but I promise it really is easy and took less than 10 minutes to make. 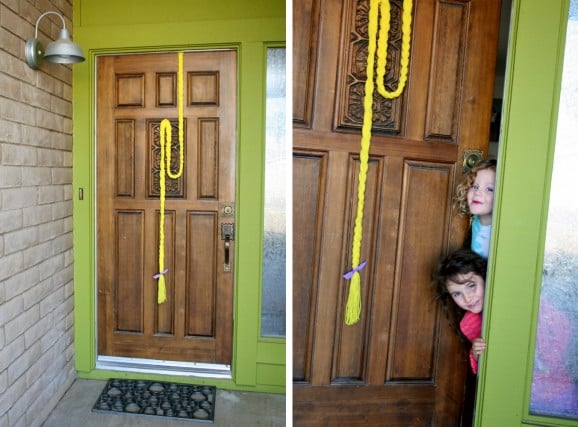 You do need three sets of hands to make this braid — Superdad, Grandma and Jenny made ours. Here’s how they did it: Grandma took the end of the yarn and walked about 18-feet away from Jenny who was holding the ball of yarn. Then Superdad snipped the yarn, started a new thread leaving the end with Grandma, and carried the ball down to Jenny. Grandma and Jenny pretty much stayed put holding the ends of the strings, while Superdad ran back and forth with the ball of yarn. They continued this until they had a cluster of 12, 18-foot strings of yarn. They carefully set aside the cluster then made two more matching yarn clusters.

Once they had all three made up, they tied a scrap piece of yarn around the ends of all three clusters leaving about a six-inch tail. Then Superdad held the end while Jenny and Grandma braided. They tied off the braid with another scrap piece of yarn, then trimmed the yarn tails evenly. After trimming the other end of the braid, they tied purple ribbon (we used 3/4-inch grosgrain ribbon) on both ends of the braid. This way when we draped the Rapunzel Braid over the door it looked finished from both sides. 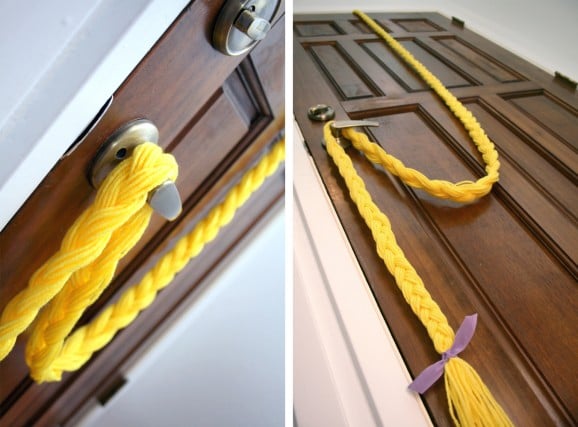 It was super easy to hang: we started by draping it over the wreath nail on the front side of our door, then went up over the top of the door and draped the other end over the back door handle. The door shut with no problem and held the Rapunzel braid in place.

Next we decked out our fireplace with this cute purple circle banner. 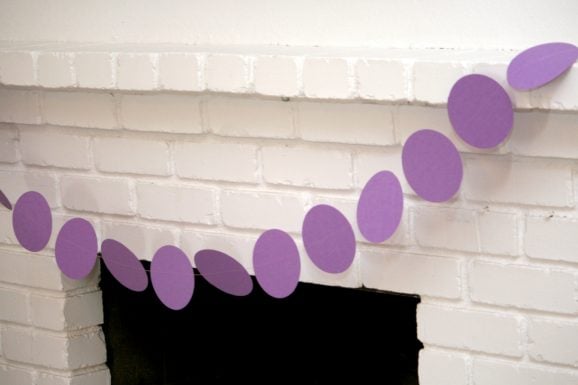 After using Aimee’s Martha Stewart Large Circle Cutter a few months back, I decided I simply must have one, so I put it on my wish list for Christmas. Superdad was sweet enough to give it to me so I had it handy to make this banner. Without that tool it would take hours to cut out all those perfect circles, but the cutter makes perfect circles in a snap. 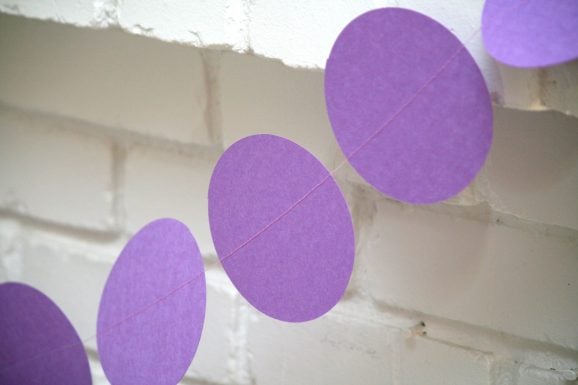 To make the banner, cut out 15, 4-inch circles. Load matching thread into a sewing machine. Pull out an extra long tail of thread (so you’ll have some to hang the banner) then using a long, straight stitch feed the circles into the sewing machine one at a time. To space out the circles, let the machine run a few stitches before feeding the next one. After the last circle is in, finish by pulling out another long tail then clip the threads. Ta da! Festive party banner in 15 minutes! 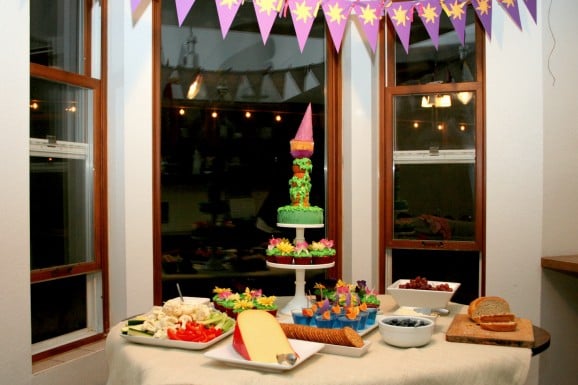 Here’s the food spread we had for the party. Almost everything we served was inspired in some way by Disney’s new Tangled movie. 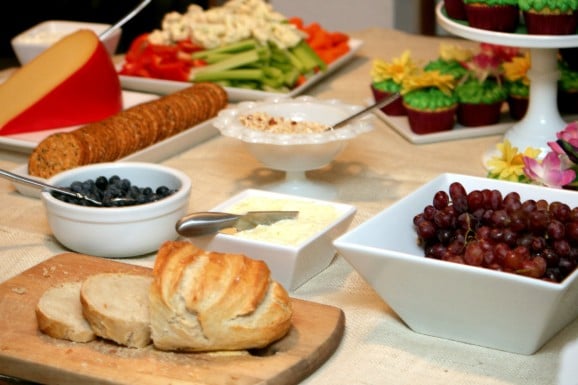 In the show, when Rapunzel and Flynn visit the village square for the lantern festival they eat baguettes and cheese. I made easy homemade artisan bread and got Attalie’s favorite cheese: gouda. 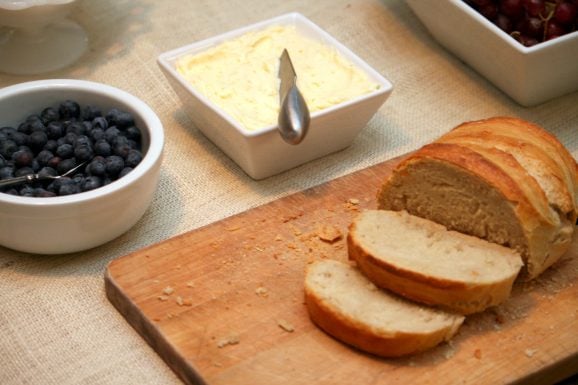 Aimee made her incredibly yummy Orange Butter, which had both the kids and adults coming back for seconds and thirds. 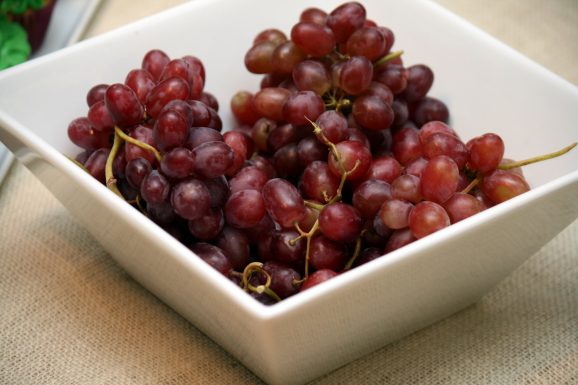 To go along with the cheese and bread we served purple grapes, blueberries and blackberries. The Supermom in me was very pleased that so much of the party food was healthy, and still the kids ate it up.

When I was brainstorming for a main dish idea, Attalie was quick to suggest that we have Rapunzel’s favorite Hazelnut Soup. I hadn’t been so quick to recall, but little Attalie picked up on lots of surprising details in the movie and was insistent that Gothel (the name of Rapunzel’s kidnapper mom, which I also did not know until Attalie told me) would always say, “I’m making Hazelnut Soup, your favorite!” 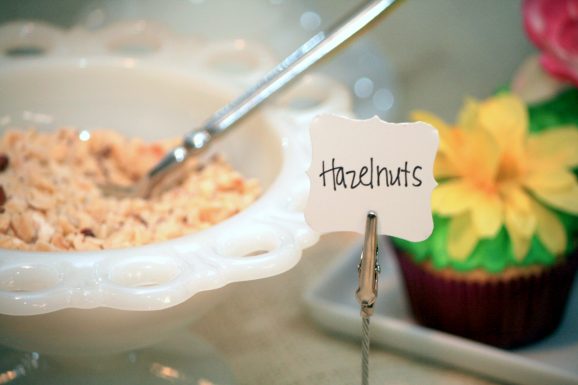 So after much searching, I found a recipe for Hazelnut Soup and made a batch for the party. There are actually no hazlenuts in the soup itself, but you sprinkle them on top. We served the crushed hazlenuts in a pretty, milk glass bowl, and I identified them with a name tag (made with the same Martha Stewart Punch I used for the invitations). 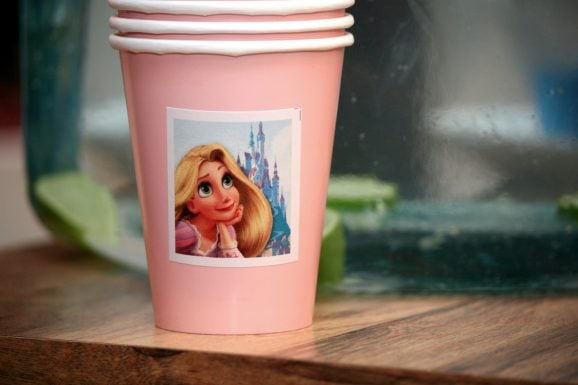 It is always a bit of challenge to balance the tastes of a slightly perfectionist mother with those of a less-discerning six year old. Case in point: while we were at the party store, little Attalie caught sight of the display of Tangled plates, napkins, tablecloth, etc. and was like, “But MOM! We must buy them ALL because they are just PERFECT for my party.”

I was cursing to myself — why hadn’t I been more careful to avoid this display? But now that she had seen, how could I make her see reason? Help her to understand that to have a table full of Tangled graphics would be tacky in a way that would undermine all my other efforts. So I proposed a compromise. I agreed to buy the least offensive item, a pack of Tangled stickers, and told her we could put them on nice pink cups and use that for her party. After one last longing look at the Tangled cups in the display, she picked up a pack of plates and countered that if we bought the stickers AND the plates, then we’d have a deal. I quickly accepted her offer. Seriously, she’s so much like her lawyer father that it’s scary! 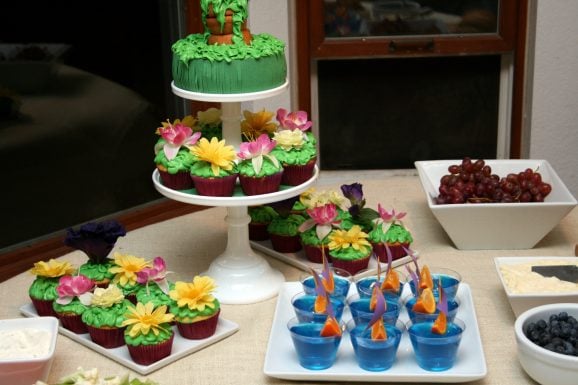 The biggest, kid-pleaser food at the party were these adorable Jello Boats that Aimee made. They were inspired by the movie’s lake scene where Flynn and Rapunzel are out on the boat watching the big lantern send off. 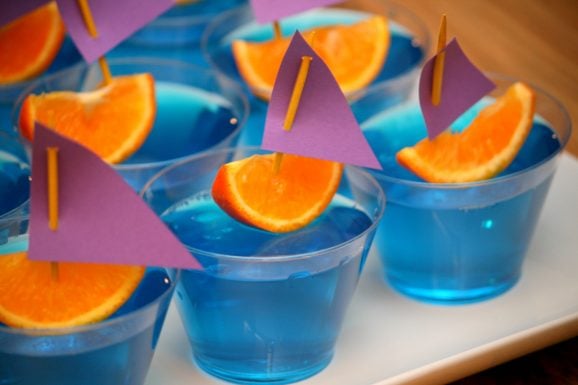 The minute I saw the purple bunting with a sun icon stretched across the village square in the movie, I knew I had to make one for the party. I designed this free Tangled Sun Banner template that you can download and print to make one yourself. We also offer a Sun Bunting personalized with your child’s name in our Supermom Co-op. 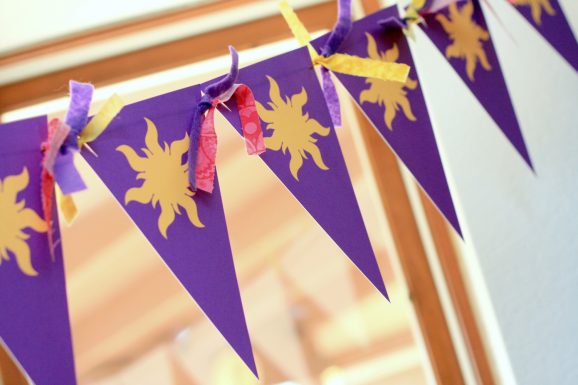 Aimee being the sweetheart that she is, cut out all the triangle flags and made slits in the corner using her Martha Stewart Craft Knife and cutting mat. Then she strung them on twine and finished the banner off with fabric scraps for a little extra flair. 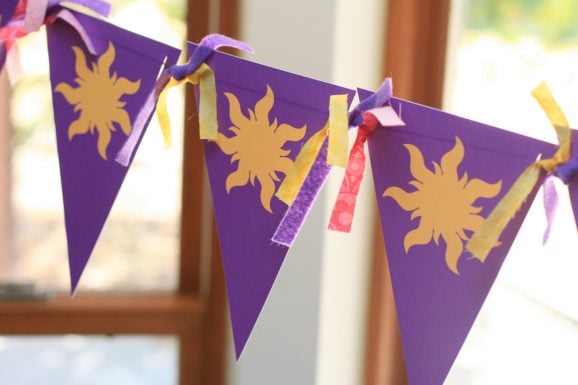 It wouldn’t be a birthday party without a cake, and it wouldn’t be a Rapunzel party without a tower! I was originally planning to make a bunch of purple frosted cupcakes and stack them onto three layers of cake stands to create an “abstract” tower. Not the greatest idea, I know, but since I’m not much of a baker or cake decorator I didn’t have anything better coming to mind. 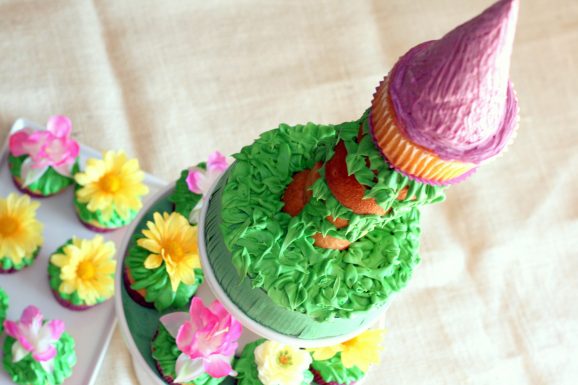 Then Aimee found this Tangled Cupcake Tower idea the day before the party. After looking over the instructions I wasn’t sure if I’d be able to find the correct ingredients, but I took a late-night trip to the store hoping to find some things and then figured I’d home make or improvise for whatever I couldn’t find. 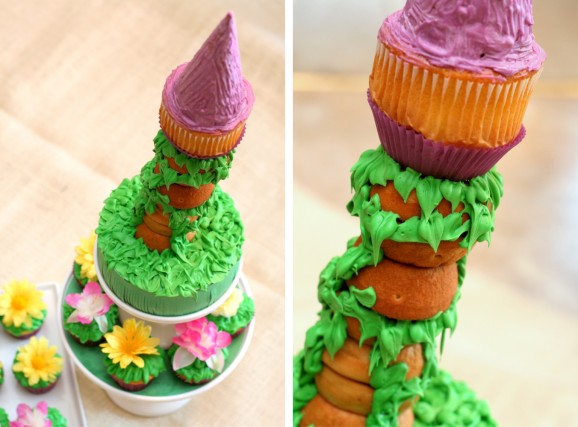 To my surprise and relief, I was able to buy pre-made pecan rolls, straight-sided muffins and old-fashioned waffle cones at Walmart! Then on the morning of the party, I hit the craft store to snag purple candy coating for the roof, a wooden dowel to be the skeleton for the tower, and a styrofoam block for the base — I went with a 4-inch, round styrofoam block instead of the rectangle called for in the instructions because I figured it would fit better on the cake stand. The only thing I couldn’t find was brown cupcake wrappers, but I used purple ones instead and actually liked them better. 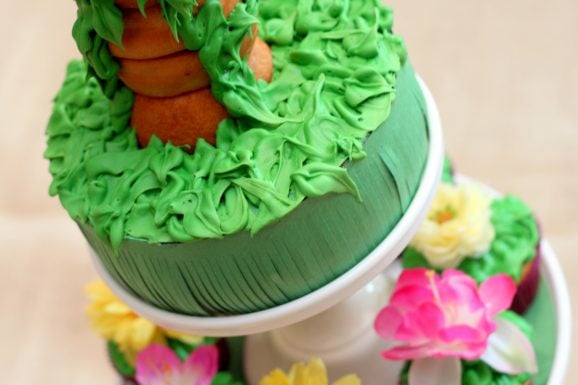 With just six hours until party time, I started assembly of the tower (talk about stress!) That Martha Stewart Large Circle Cutter (remember the one I used to make the purple circle fireplace banner) was a lifesaver for quickly cutting a green construction paper circle top for the styrofoam base and another, larger circle to line the second cake stand. Then I cut a couple long, 2-inch strips of green construction paper to wrap around the base. I wanted them to look “grassy” so I borrowed my mom’s Martha Stewart Fringe Scissors. 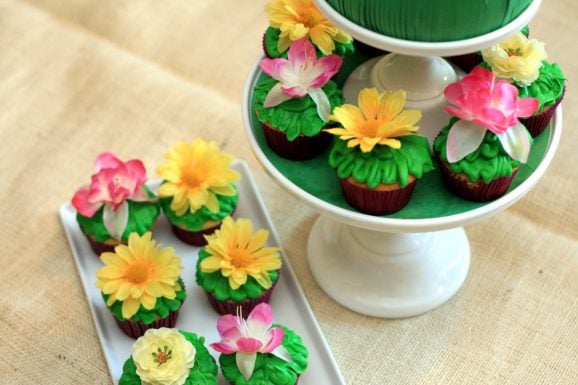 Instead of the purple frosting I’d planned for the cupcakes, I made green and piped it on to look like grass. I freely admit that I am terrible at decorating cakes but luckily grass can look messy and still look good. I would tell you which metal frosting tip I used, but I’m so NOT a cake decorator that I’m not even sure what this one is called. It sort of looks flattened out on the end and has a bit of a crescent shape to it. I know you’re probably laughing at me over this, but really it’s good because it means that if I can make this cake you can too! The “grass” frosting was looking so fun I decided to pipe some onto the tower and base. Finally I topped each cupcake with a silk wildflower to finish things off.

UPDATE: One of our blog followers shared her Superdad’s idea for a doughnut tower cake. She attached a wooden dowel to a wood block and then stacked donuts on top — very clever and so simple to execute. I love this as a simple alternative for a Rapunzel Tower Birthday Cake. Check out her full instructions.

Okay, I know that was a lot of info. I’m glad you made it! Be sure to check back tomorrow for lots of Tangled party games, activities and one very cute Rapunzel party favor.

EDITOR’S NOTE: We’ve heard the requests for an easier Tangled Birthday Party Invitation, and we’ve created these two NEW! colorful and printable Rapunzel-themed invites that can be personalized with all your party details. For more info visit our Supermom Co-Op. 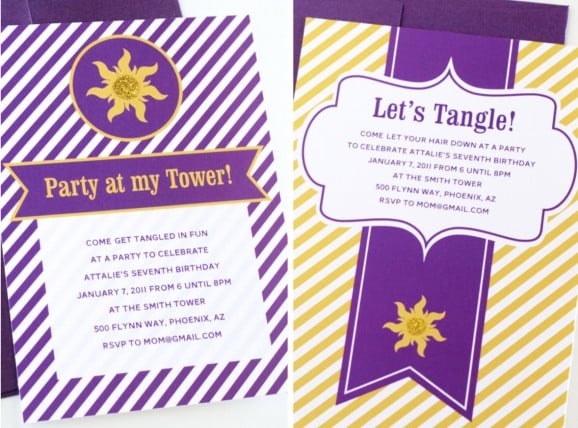