My oldest daughter just turned nine, and to celebrate her birthday she wanted to hold a Cupcake War. I don’t think she has ever seen an episode of the Food Network show Cupcake Wars, but she loves the Cake Boss series, and somehow picked up on the “Cupcake Wars” phrase. So we invited over a few of her friends and got baking! 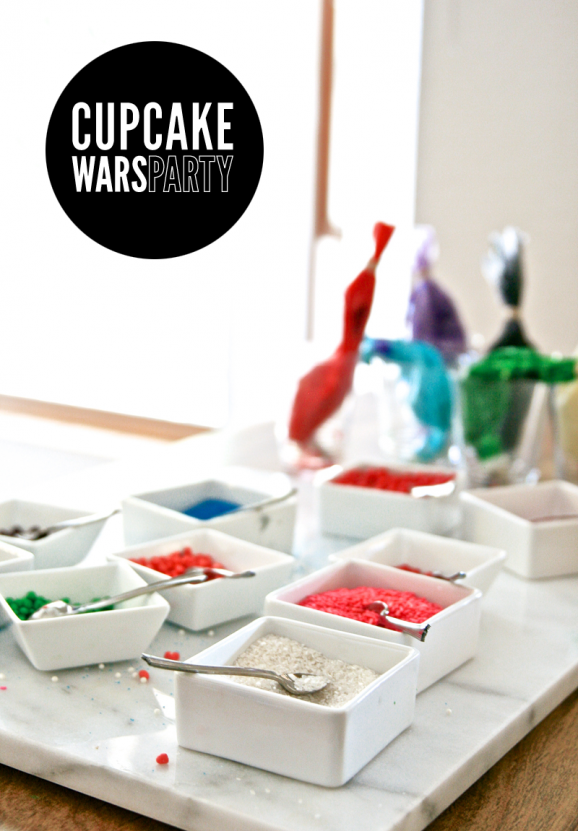 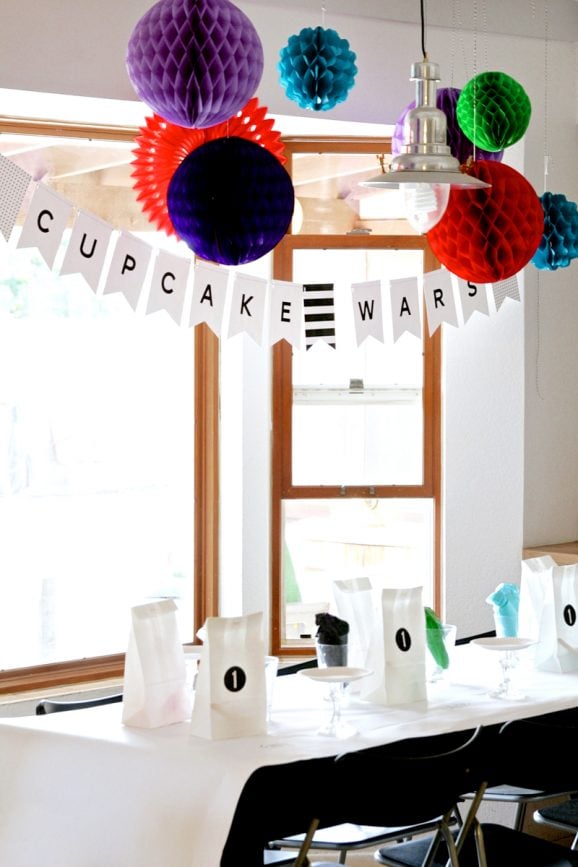 Turns out a Cupcake Wars birthday party is pretty easy to pull off. As far as party decor goes we created a simple “Cupcake Wars” banner and hung some colorful, tissue paper honeycomb balls and fans. (I’m sharing our free printable Cupcake Wars Banner template below). Then we used butcher paper as a tablecloth to make clean up a breeze. We marked the girls’ spots by simply writing their names on the butcher paper with a marker. 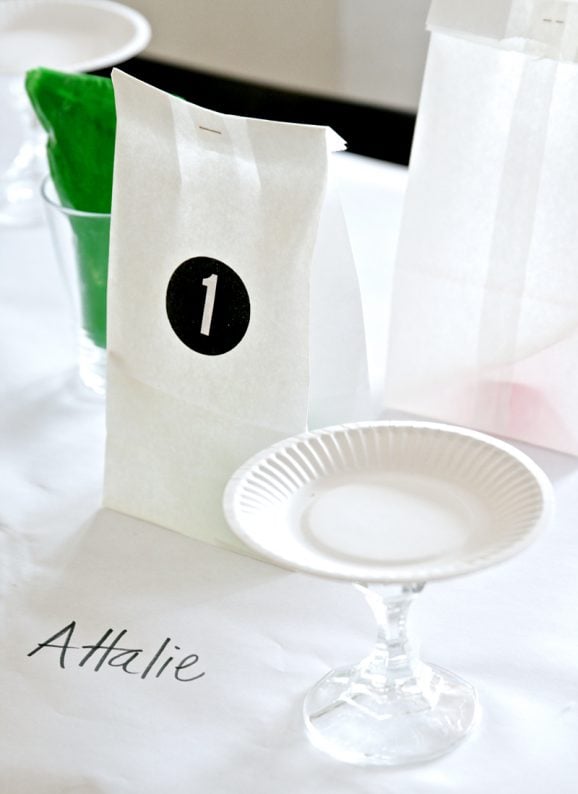 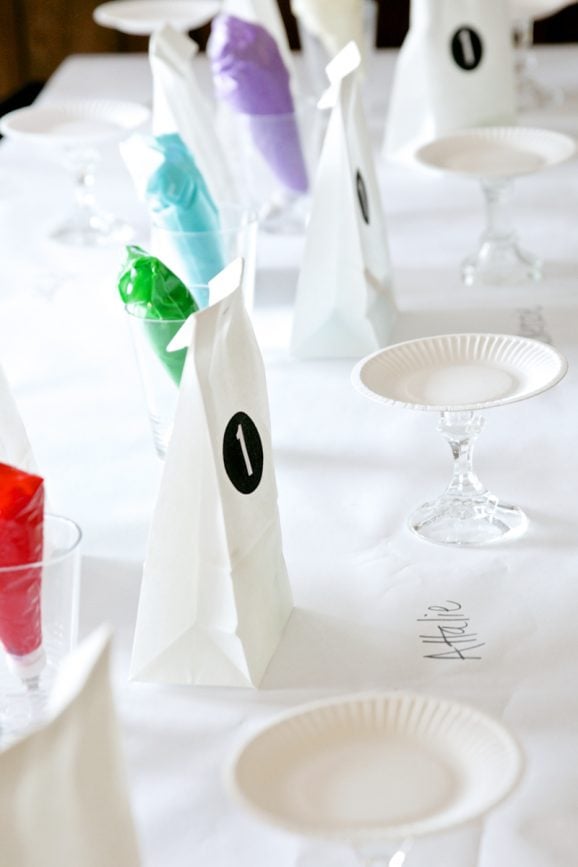 During the party the girls decorated three cupcakes each in three rounds. The white paper bags on the table concealed objects they needed for the challenge in each round. When guests arrived, the table was already set with Round 1 bags. Download our free printable Round 1-3 tags below.

The ROUND 1 bags held a colored cupcake liner and a disposable knife. Each competitor was told to create a cupcake using just the color of their liner.

For ROUND 2 we gave each girl four, mini appetizer forks. There was NO knife in the bag this time. They had to decorate their cupcakes using just the mini forks; plus they had to creatively use at least one fork in their final cupcake creation.

The final ROUND 3 bag included just a disposable knife, and we gave them a wide open field — this round all we said was the most beautiful cupcake would win.

We timed each of the rounds just to add to the excitement. After playing with it a bit during our party, we think the ideal time limits would be 15 minutes for the first round then 10 minutes for each of the subsequent rounds. 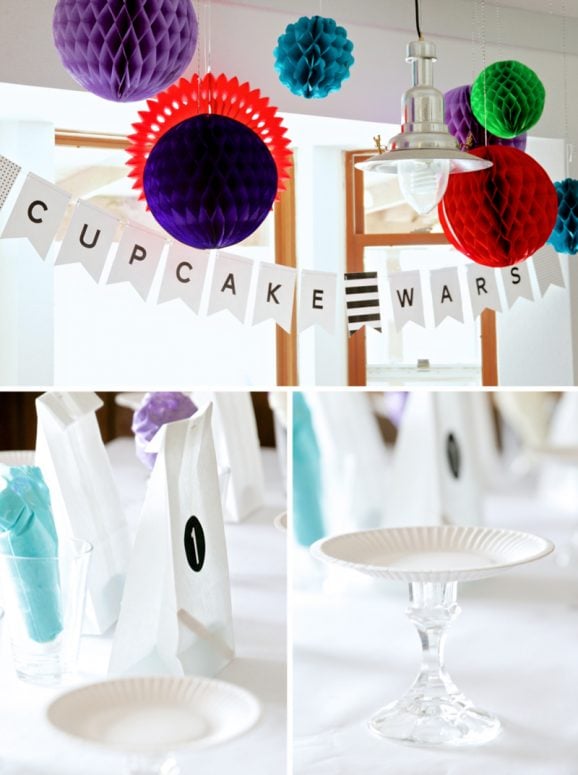 To make things feel more official we also set each place with a makeshift decorator’s stand. We made miniature cupcake stands by hot gluing mini paper plates to short glass candle holders. Candleholders like these are available at most dollar stores, and the hot glue peeled off completely after the party. 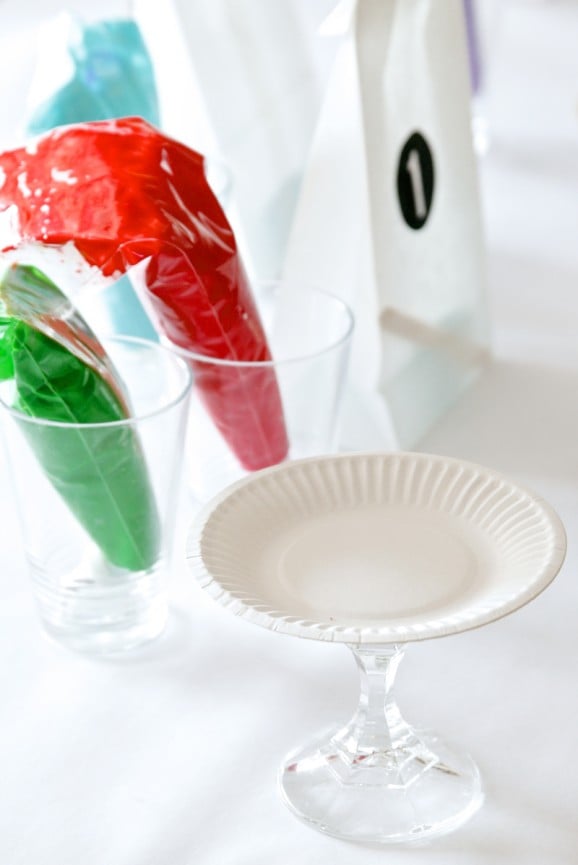 You know how those classic paper plates tend to stick together? Well we used this to our advantage… when making these stands we made sure there were at least three plates stuck together and glued that to the candle holder. Then after the girls finished with one round, we removed the cupcake and top plate so we had a fresh, clean plate for the next round! 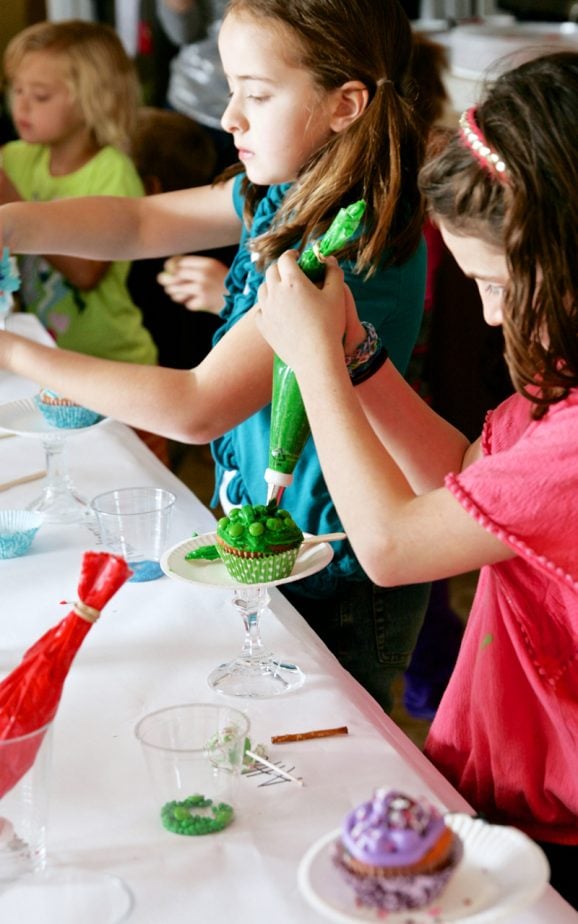 To prep for your Cupcake Wars party, collect colorful sprinkles and candies that would be fun for the party guests to use in decorating. We picked a color palette (red, green, aqua and purple) to help us focus in on what we would need to buy. We pulled out sprinkles leftover from other parties and purchased the additional colors we needed. We found gummy-shaped candies (gummy bears, butterflies, etc) were a popular choice with our kids. Nerds candies and miniature DumDum lollipops also sparked a lot of creativity. 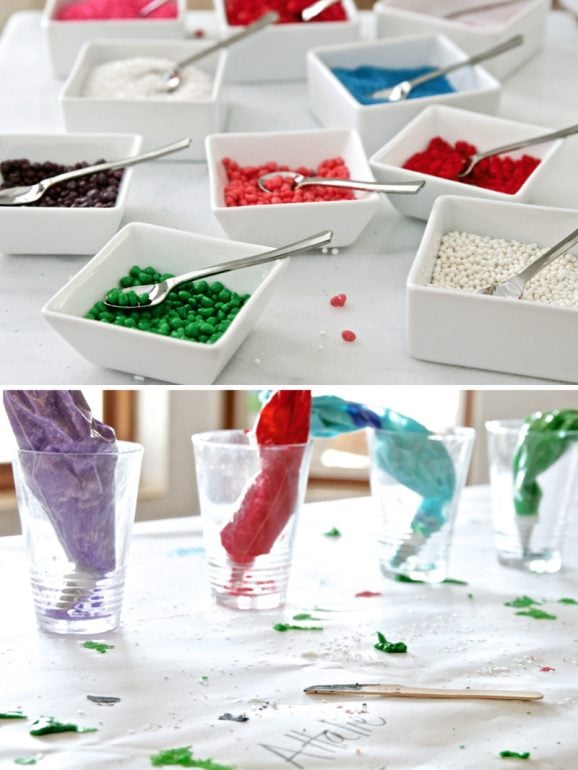 Bake the cupcakes and make colored frosting ahead of time, but the beauty of this party is you don’t actually have to frost a single cupcake! We made about 50 cupcakes (from 2 cake mixes) the night before and refrigerated the cupcakes until party time. We baked the cupcakes in simple, white liners since we provided decorative wraps as part of the Cupcake Wars challenge during the party. 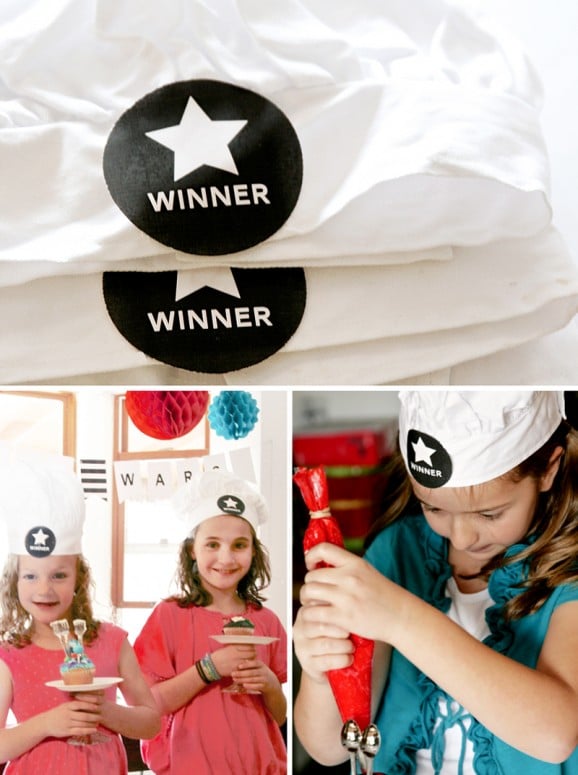 After each round we had the mom “judges” vote, and we named a winner and runner up. The winner received a chef’s hat with a “WINNER!” badge on it. Download our free printable Winner Badges below. 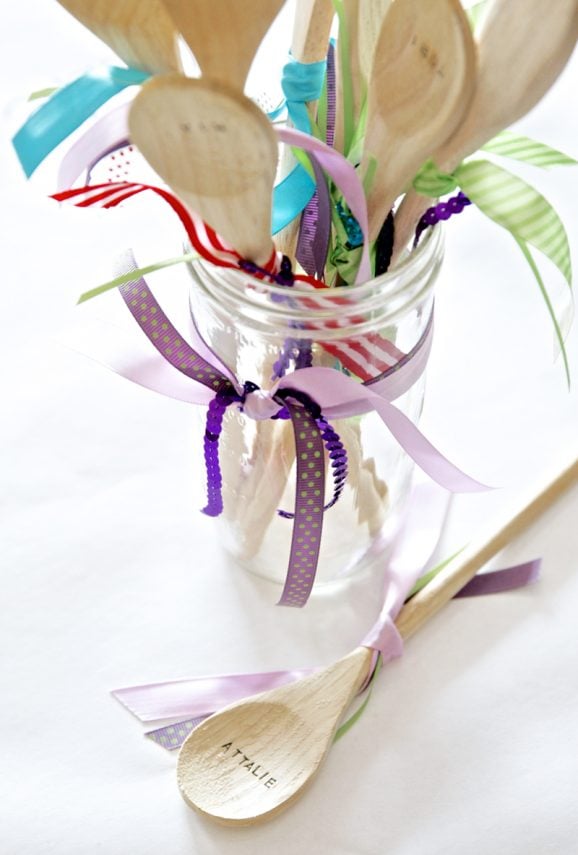 All of the party guests received a personalized wooden spoon that we stamped with jewelry letter stamps. We also had large tubs and dome lids on hand to help party guests take home their cupcakes — I’m sorry I forgot to snap a photo, but it was basically just like this cute cupcake packaging. We included a free printable striped seal template below.