I’m so excited to finally share with you today all my Lalaloopsy Party Ideas from Piper’s Lalaloopsy Birthday Party. I need to begin by giving a BIG thank you to Erika over at Yellow Pear Photography for helping me out with the photos for our Lalaloopsy party. 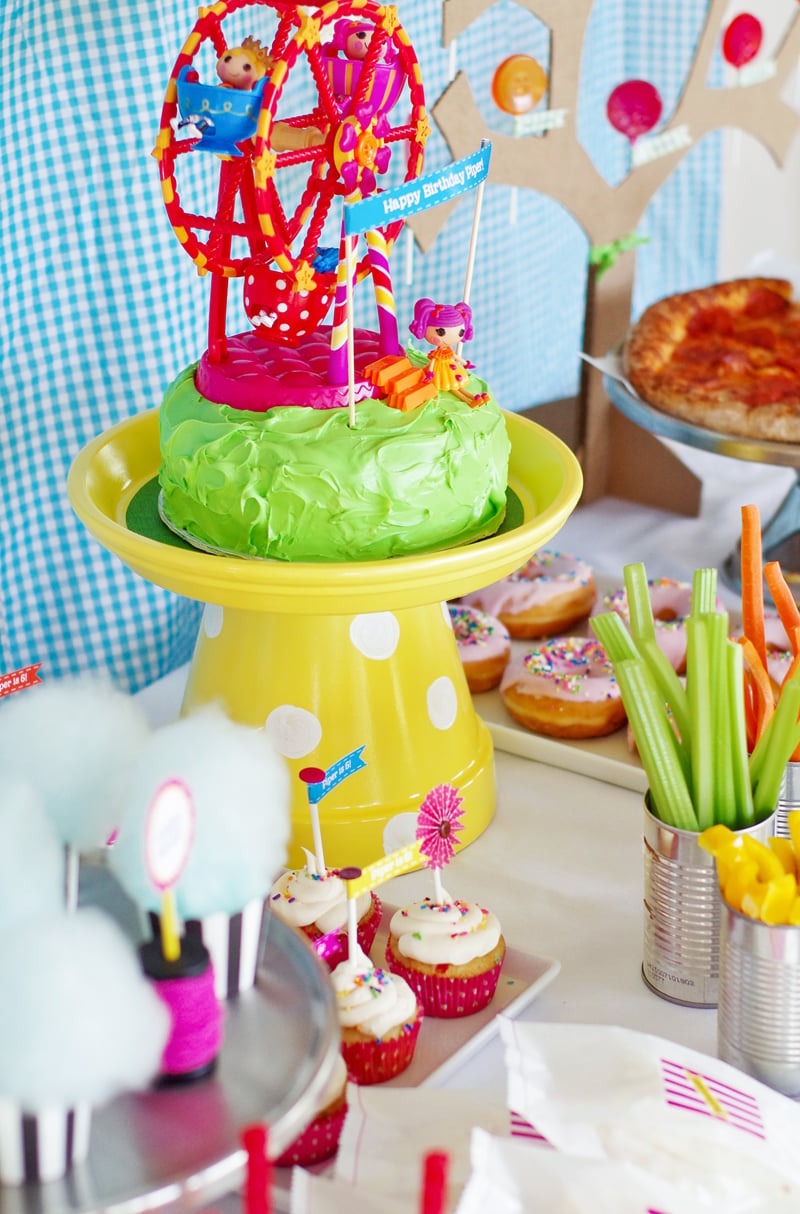 My girls adore the little Lalaloopsy dolls, and I really wanted to bring the Lalaloopsy fantasy world to life for them. I was inspired by a lot of different things as I searched for Lalaloopsy party ideas so be sure to check out my Lalaloopsy Pinterest board. 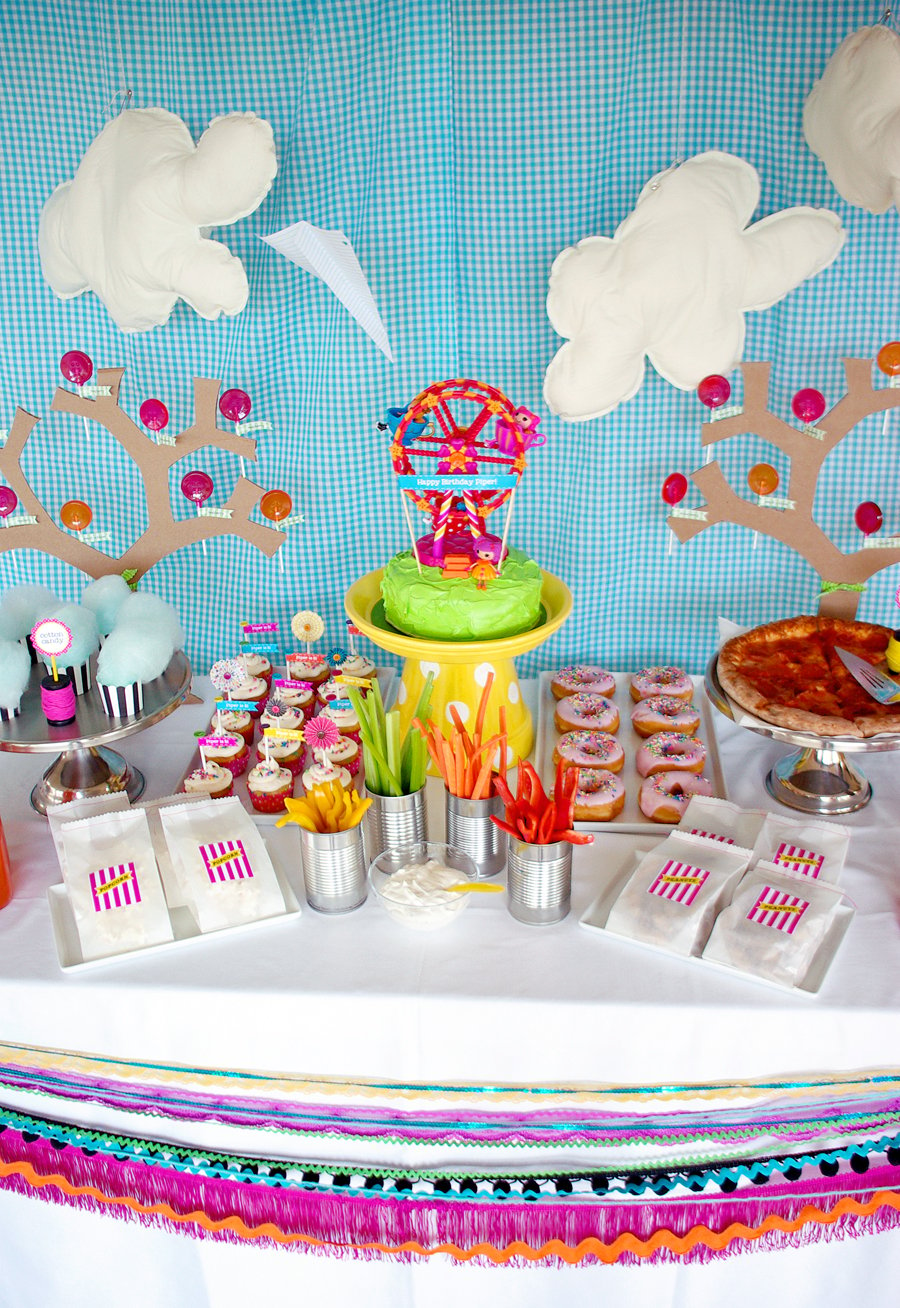 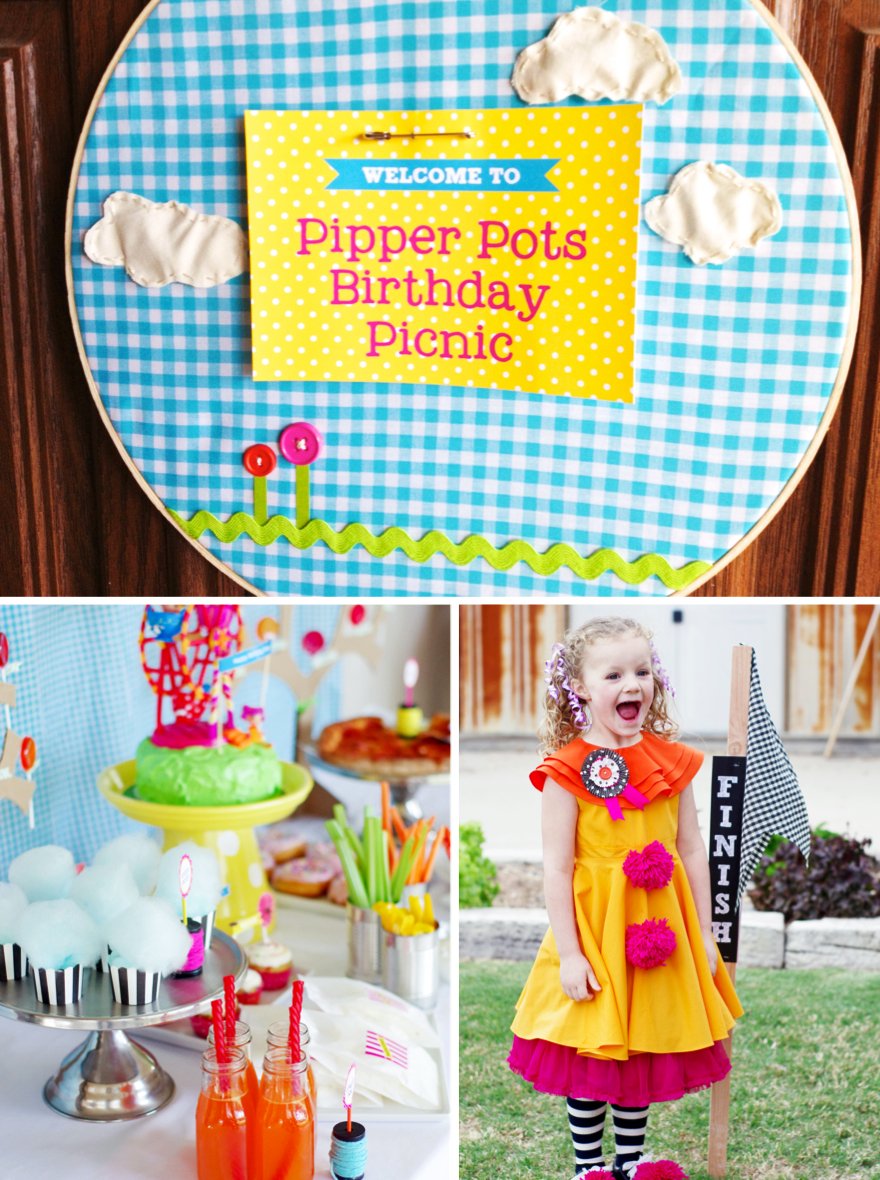 First off, I have to tell you about Piper’s dress.

Since her favorite Lalaloopsy changes almost daily, Piper and I agreed that she would dress up as my favorite — Peanut Big Top. 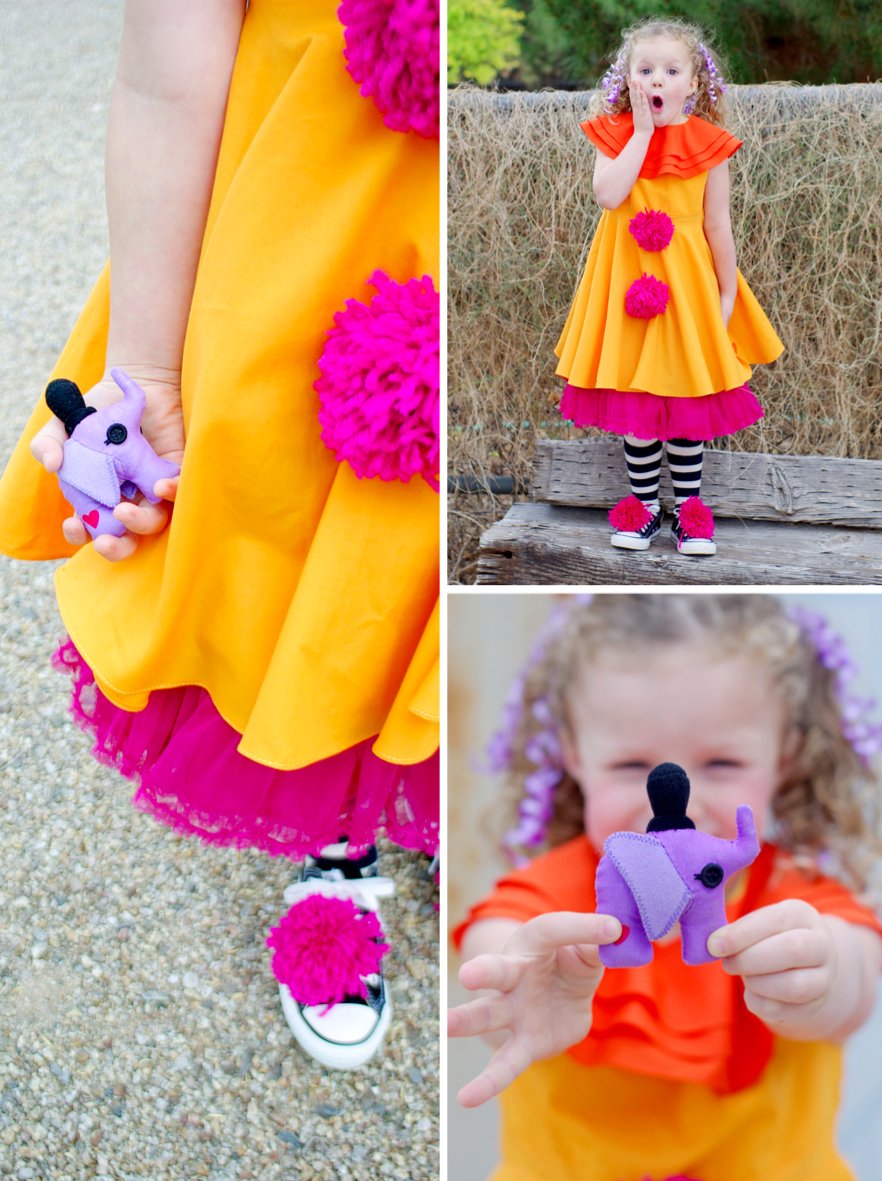 Peanut has several different outfits, but I absolutely love the adorable party dress worn by the Mini Peanut who comes with the toy Ferris Wheel. My cousin Laura is an amazing seamstress and created a fabulous replica of this darling dress in Piper’s size. I can’t get enough of the big, pink pom poms and that ruffly orange collar. Since the party, our dress is getting lots of use as Piper and Attalie play dress up (thank heavens they can both wear the same size!) You can buy this dress for your little doll here.

I think our Lalaloopsy cake turned out really cute, especially considering it was the easiest Lalaloopsy Birthday Cake ever! I baked a chocolate cake and frosted it with green frosting — I was going for the look of a grassy hill to set the Ferris Wheel toy on top of. I used a knife to spread on the frosting in sort of messy strokes — talk about easy! I literally frosted the cake in less than five minutes. To give the cake a personal touch I made a “Happy Birthday Piper” banner with this printable glued to wood barbecue skewers, which reminded me of the entry gates you might see at a real carnival ride.

As I mentioned previously, a lot of common items are given a new purpose in the Lalaloopsy World. Piper loves pointing out these ordinary objects that have been re-imagined (for example, she would tell you to look closely at that ferris wheel toy because those seats are actually cups). So I tried to really embrace this concept and find new uses for things at our party. Instead of a cake stand, I inverted a terra cotta plant pot, painted it a cheerful yellow-and-white polka dot and used it as a pedestal for the birthday cake.

I also made matching printable cupcake toppers. We used hot glue to attach each flag to a lollipop stick and added buttons to the top. We found these perfect accordion-folded paper flowers that had button centers (they’re meant to be scrapbooking embellishments and are called Delights from American Crafts). We also attached those to sticks and mixed them in with the flags. 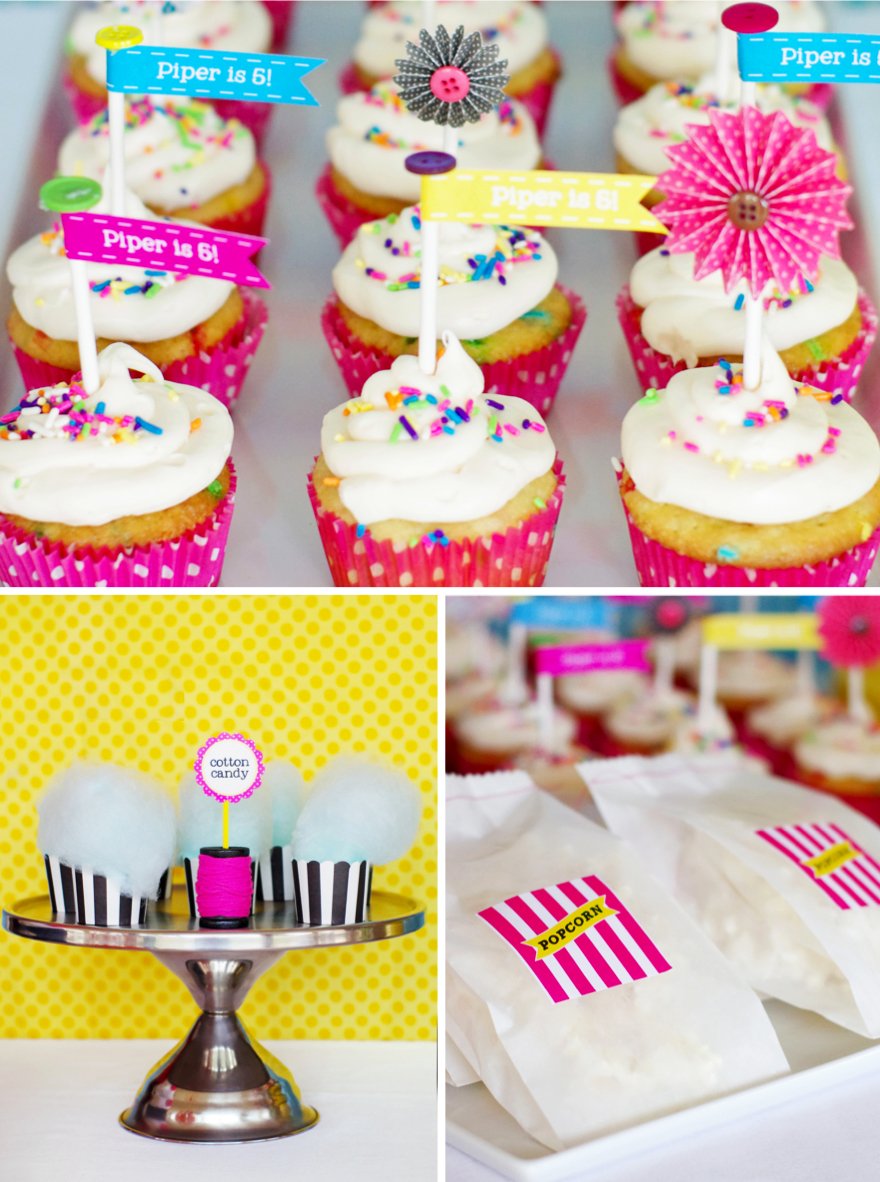 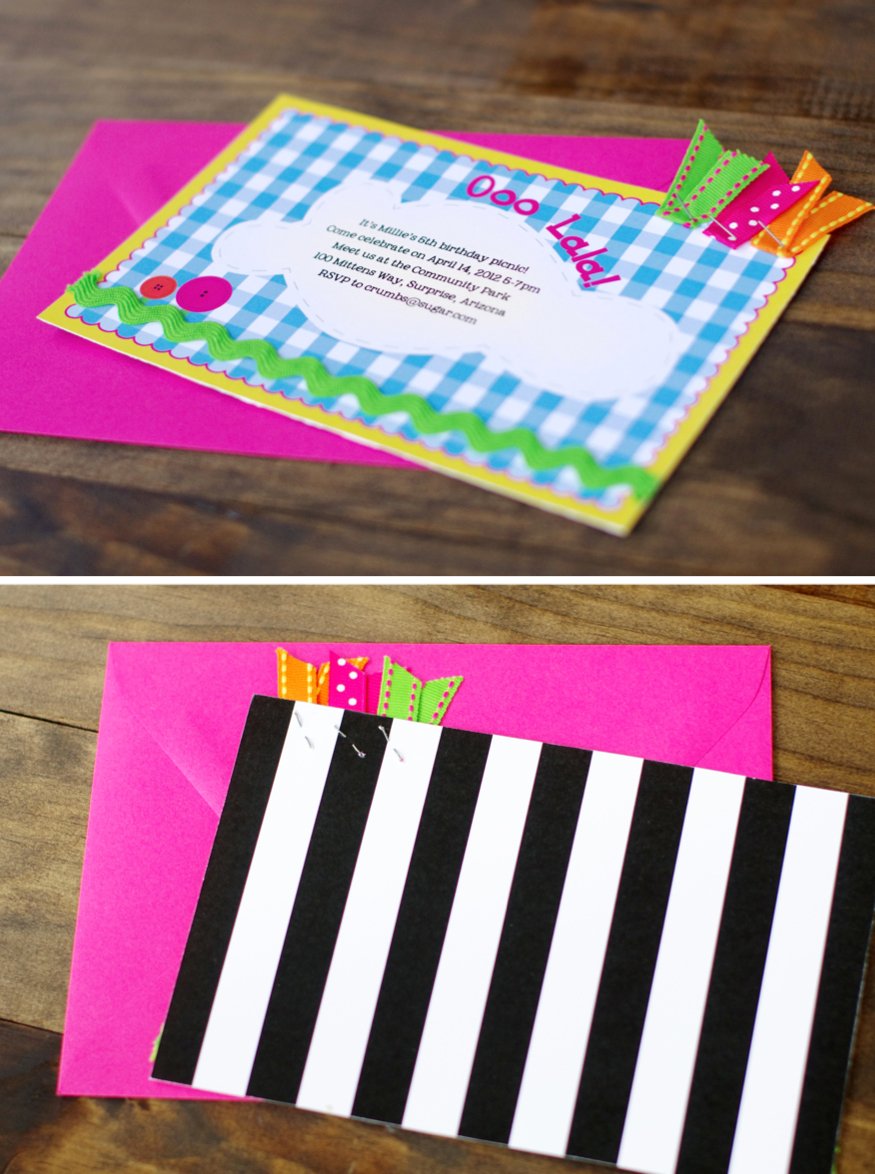 The birthday girl loves Cotton Candy, and we served it up fresh in these darling black-and-white cups, which matched the stripe back of our Lalaloopsy Birthday Party Invitation. We made the Cotton Candy ourselves using this machine (see our homemade cotton candy tutorial).

I think my favorite part of the Lalaloopsy food table are the Lollipop Trees. Superdad was the genius behind this project — he made them out of cardboard. He cleverly figured out that if he cut the cardboard so that the inner corrugated lining was running up and down, we could simply slide the lollipops into the corrugated grooves without having to poke any extra holes. The trees created a lot of WOW for next to no cost since we made both trees from a recycled shipping box. I handmade the button lollipops using this mold and this recipe. We wanted guests to be able to distinguish between the lollipop flavors so we added these free printable leaf tags. 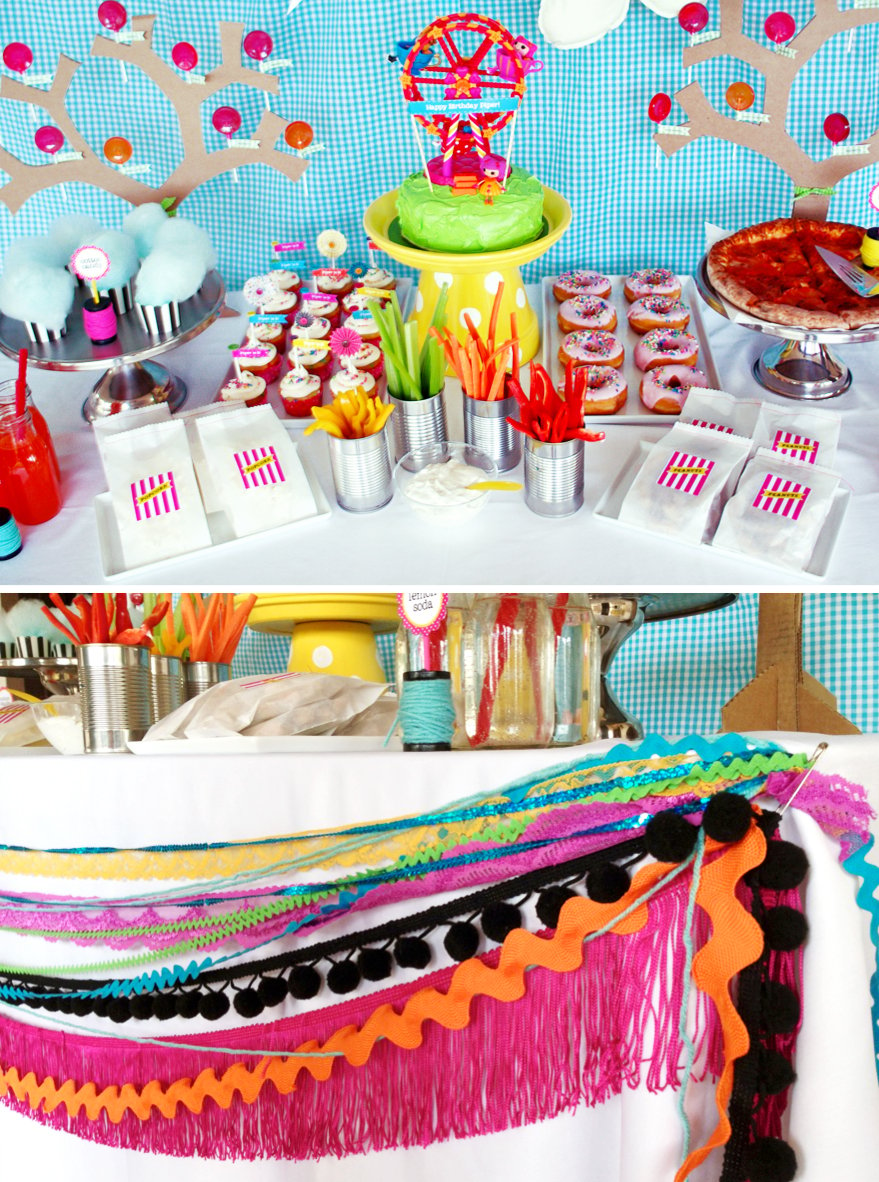 This Lalaloopsy Party Decor was so much FUN to create! Just LOOK at all that fun trim on the front of the table! I can’t even tell you how much I love this Fancy Fringe Table Garland. At the craft store I enjoy strolling through the trim aisle just to play with the little ball trim and gawk at the sparkly sequins. I have been waiting for a LONG time for a good excuse to buy a bunch of trim, but since I don’t sew much, (in fact my sewing machine has probably seen more paper than fabric) I don’t have a lot of good use for trimmings. I wasn’t about to let this opportunity go by. I let myself loose in the the trim section and came out with all these fun pieces that I layered onto the front of the party food table. A lifetime’s worth of pent-up trim envy created one super-adorable table garland, don’t you think?

The birthday girl requested pizza and lots of sweets, but the Supermom in us insisted on a few healthy choices. This fantastically whimsical Tin Can Veggie Display makes the veggies look so fun and was right at home in Lalaloopsy land.

We served Popcorn and Peanuts in glassine bags sewn closed with hot pink stitching. Download the free, circus-inspired “Popcorn” and “Peanuts” printable labels for your own party.

In keeping with the whole idea of re-purposing things (like the wooden spool sign holders), at our Lalaloopsy party we snipped the ends off licorice to make straws and instead used the straws as beads for our necklace craft! 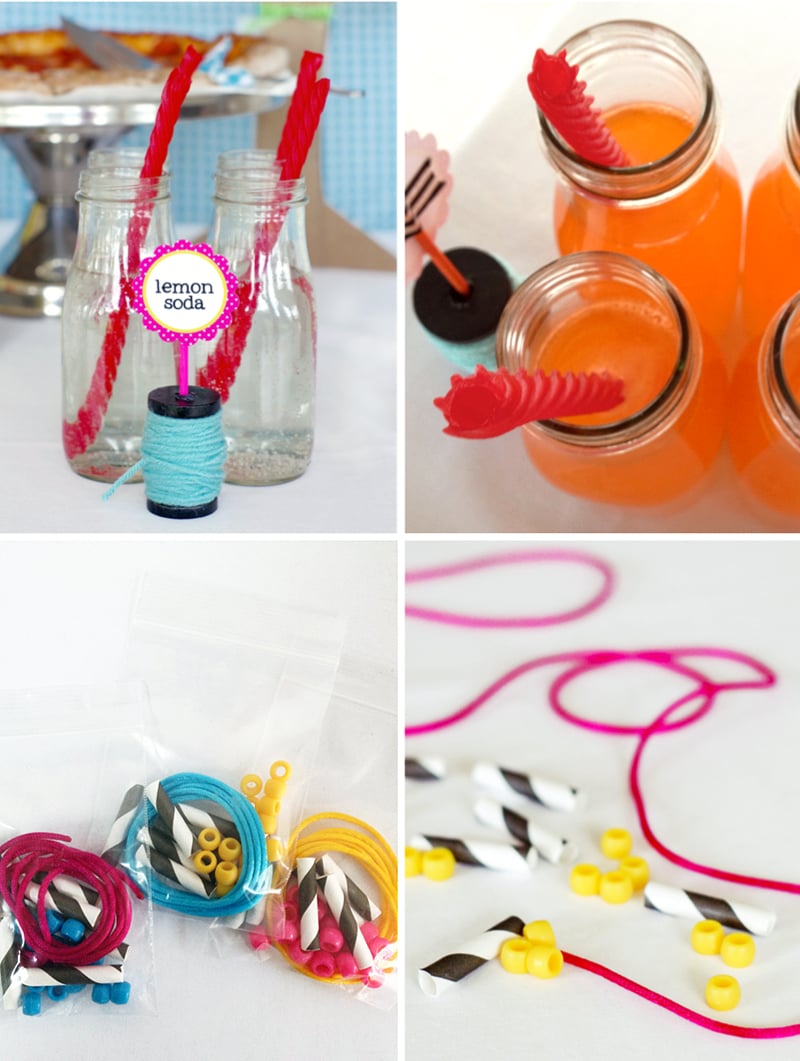 We cut black and white paper straws into one-inch pieces to use as beads. We then bagged up necklace kits for each of the guests, which included a handful of straw beads, colored pony beads and coordinating cording. The individual bags were a big help come party day making it a cinch to quickly distribute the correct amount of supplies to each of the kids. 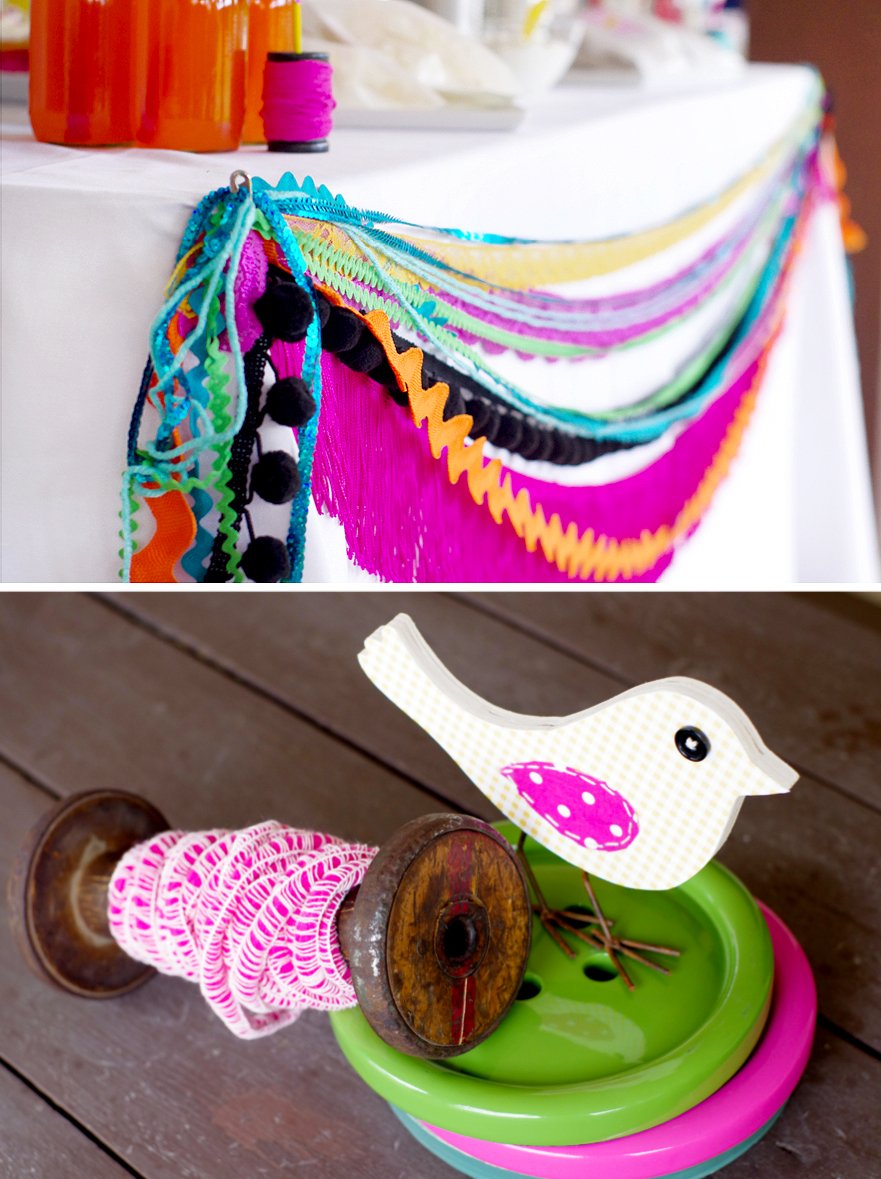 As guests gathered at the party we put them to work creating beautiful Button Art masterpieces using these Lalaloopsy-inspired coloring pages. We printed the coloring pages onto white cardstock (the thicker paper holds up better to the weight of the buttons) and set it out on the table with crayons, glue and a jar of colorful buttons. 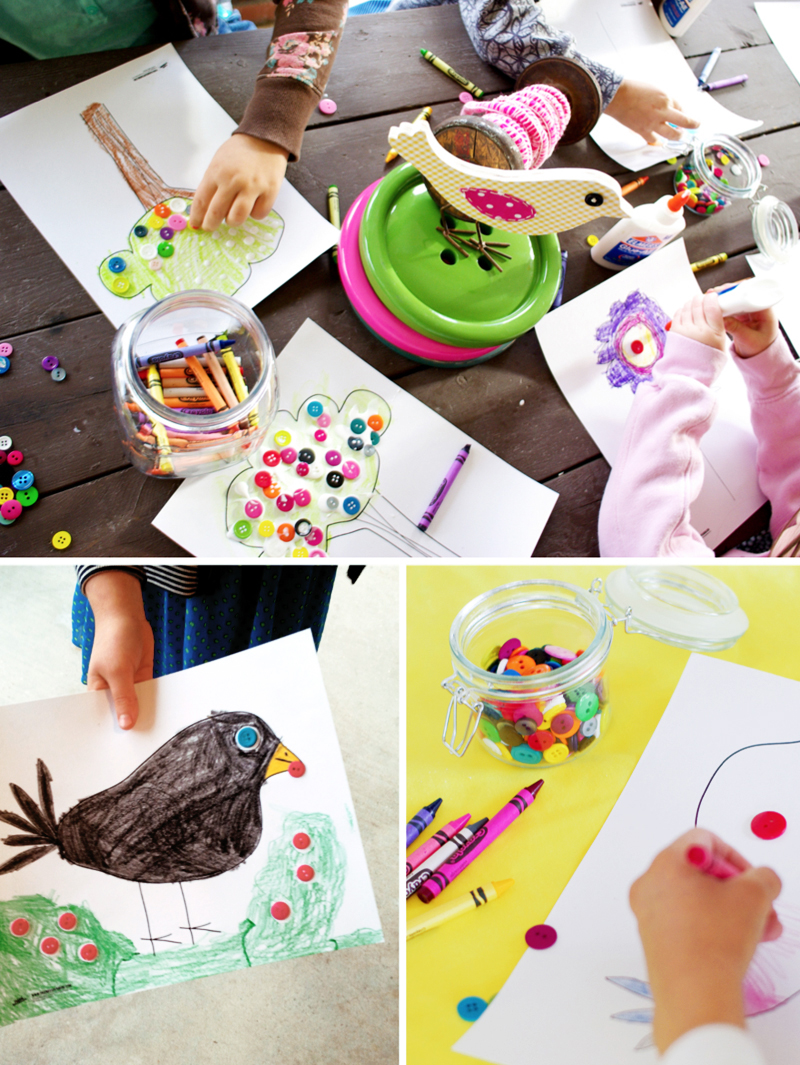 I’m sure that if Lalaloopsy dolls had a Ring Toss they would use embroidery hoops tossed around knitting needles — it worked perfectly!

As a last-minute thought I grabbed my yellow sewing measuring tape to use as a starting line for the tossing games.

I raided my mom’s sewing closet to collect these colorful, vintage spools of thread for our Spool’s Eye game, which involved tossing the thread into a metal bucket from behind the yellow measuring tape line. 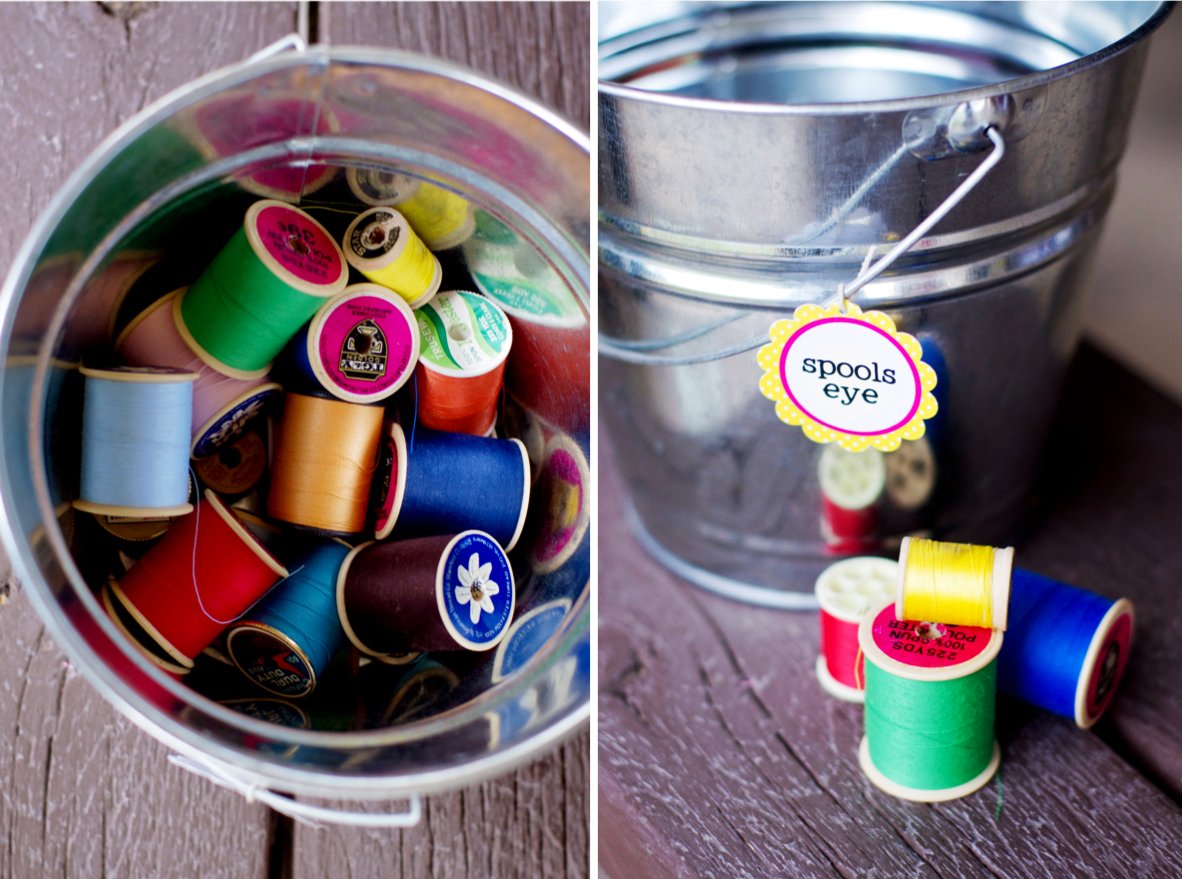 Our Loopsy Game (inspired by Twister) was a real crowd pleaser. Learn more about how we made our DIY Loopsy Game. 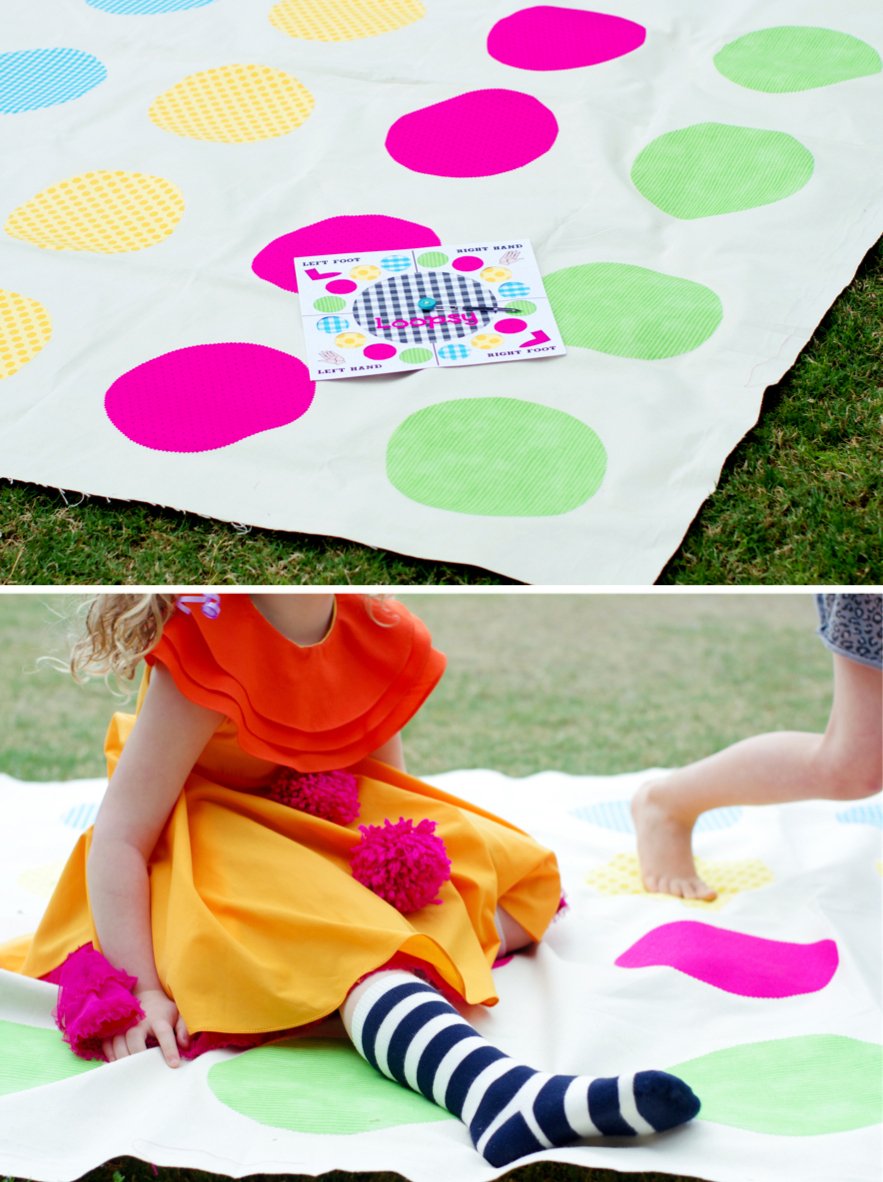 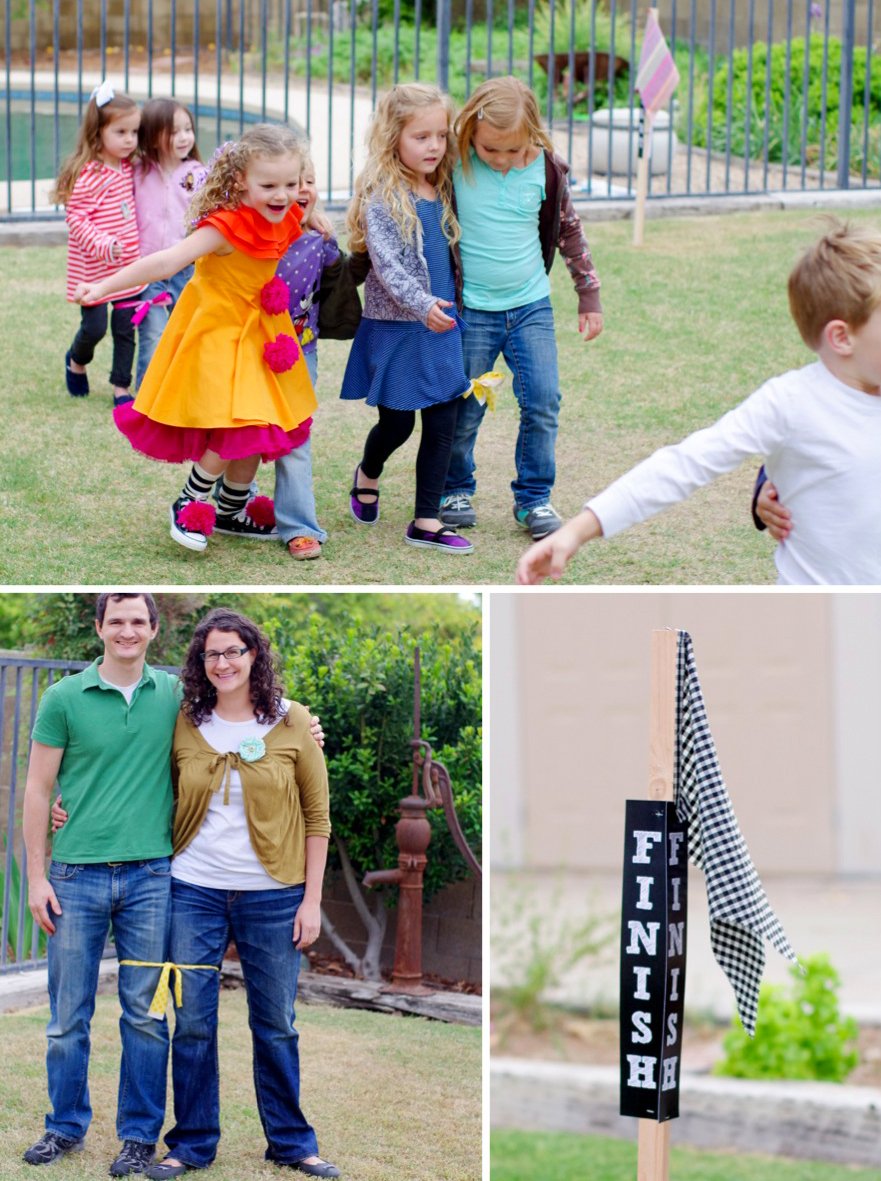 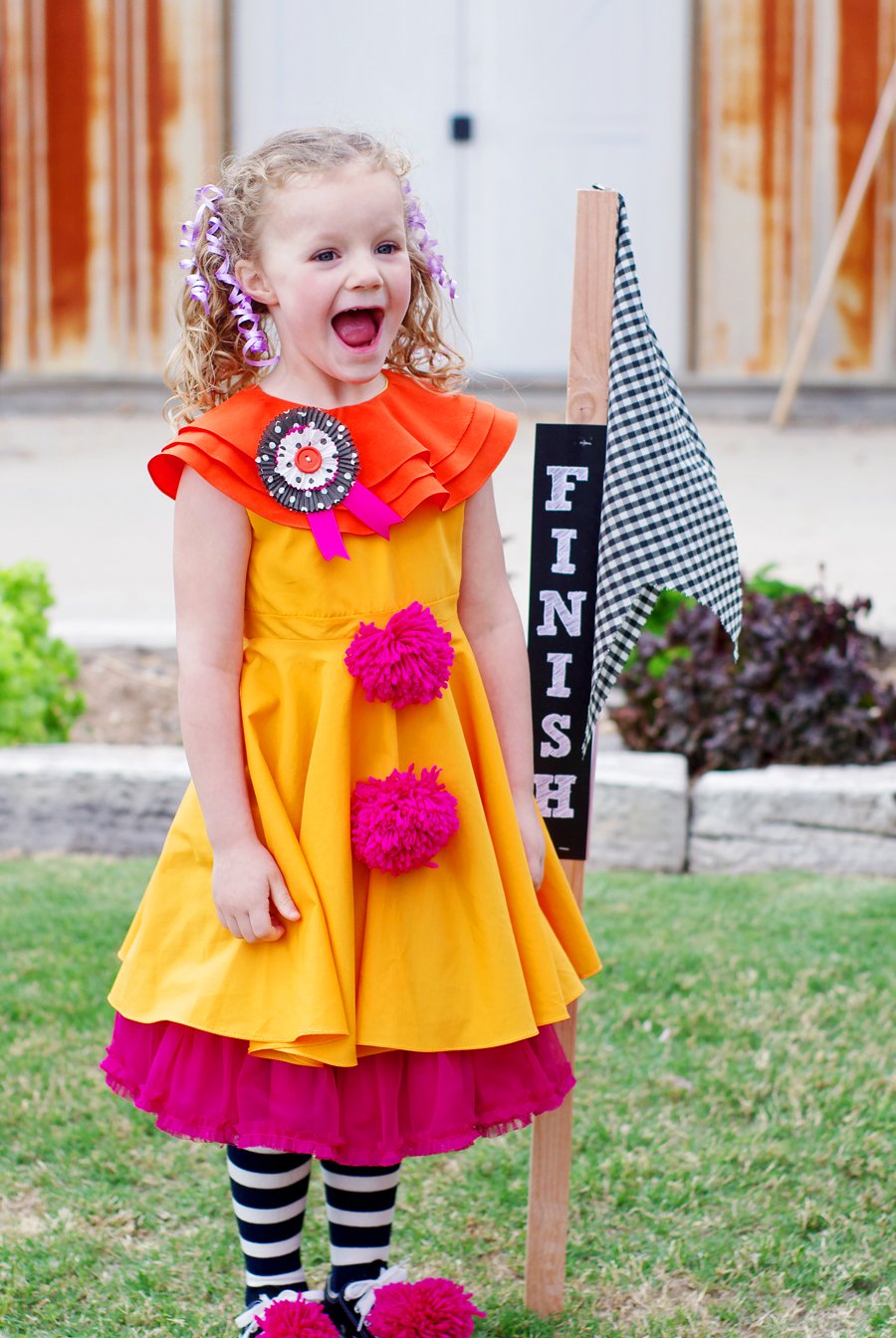 We also had a Potato Sack Race but with pillowcases inspired by the Pillow Featherbed doll. 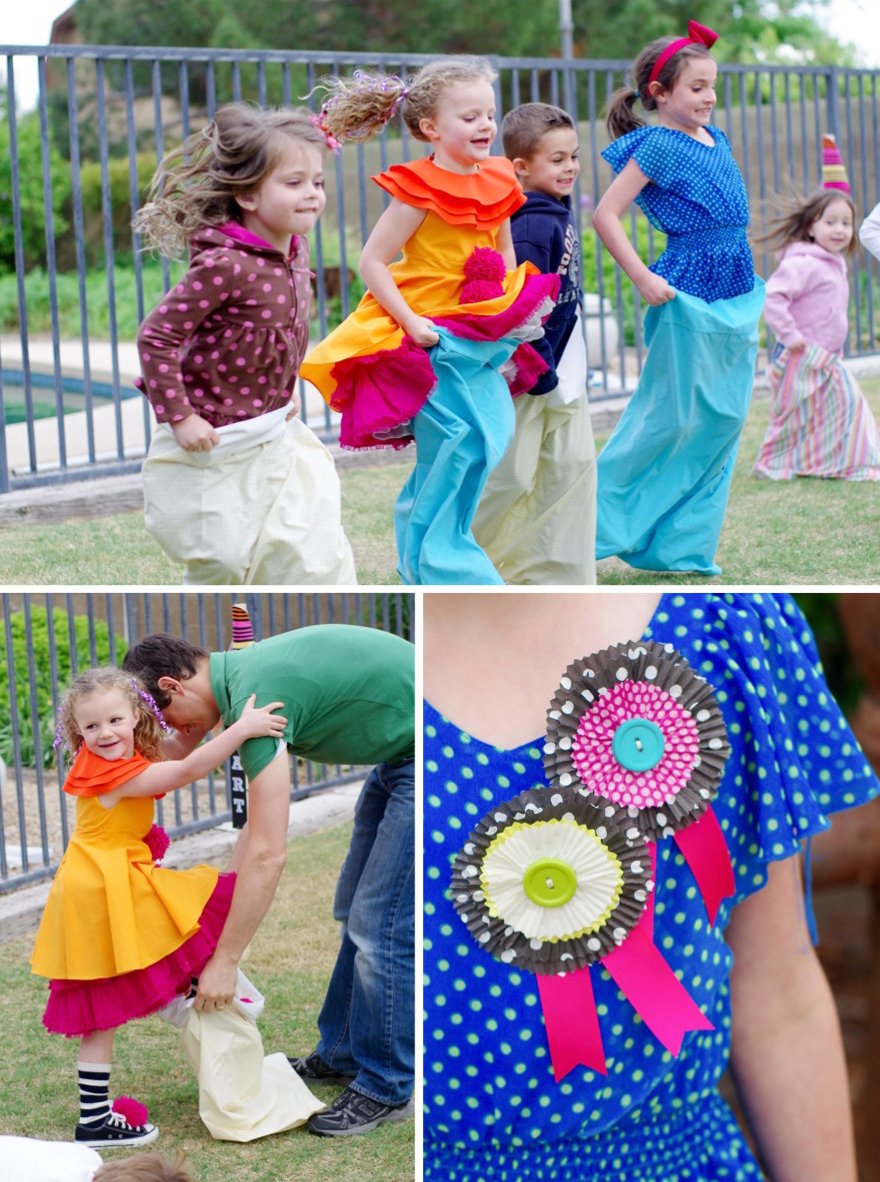 Race winners received Cupcake Liner Award Badges that I made with this tutorial. I intended to have more of these on hand, but they turned out to be deceptively difficult and time consuming albeit incredibly cute. (To be fair: I was making these after midnight the night before the party so maybe I was just really tired.)

I think I saved the best for last — still swooning over these Button Flying Disk Party Favors. You’ll be glad to know that they are super easy to make. 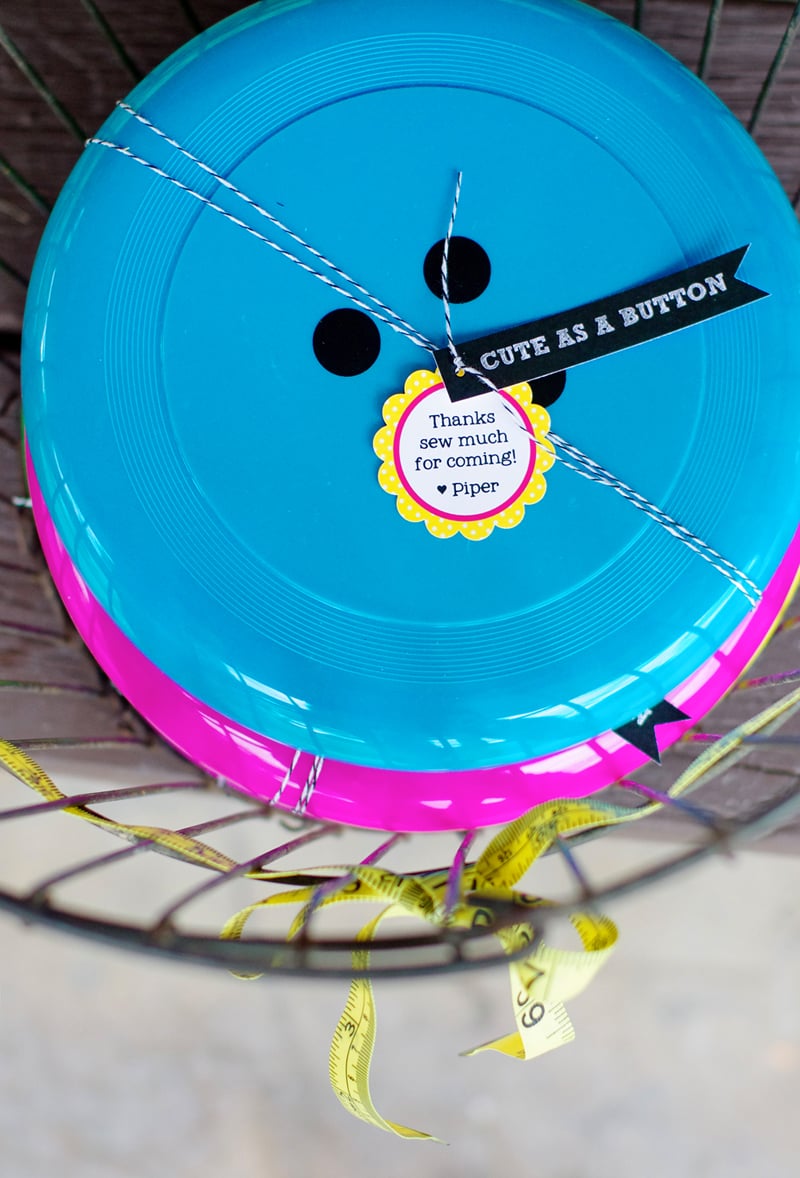 HOW TO MAKE LALALOOPSY PARTY FAVORS: Buy enough colored flying disks for all your guests, preferably without any logos or writing printed on them. To transform the flying disks into buttons, we stuck on four, 1-inch black circles cut from adhesive-backed vinyl. To cut the circles we used a vinyl cutter machine but a circle paper punch might also work. 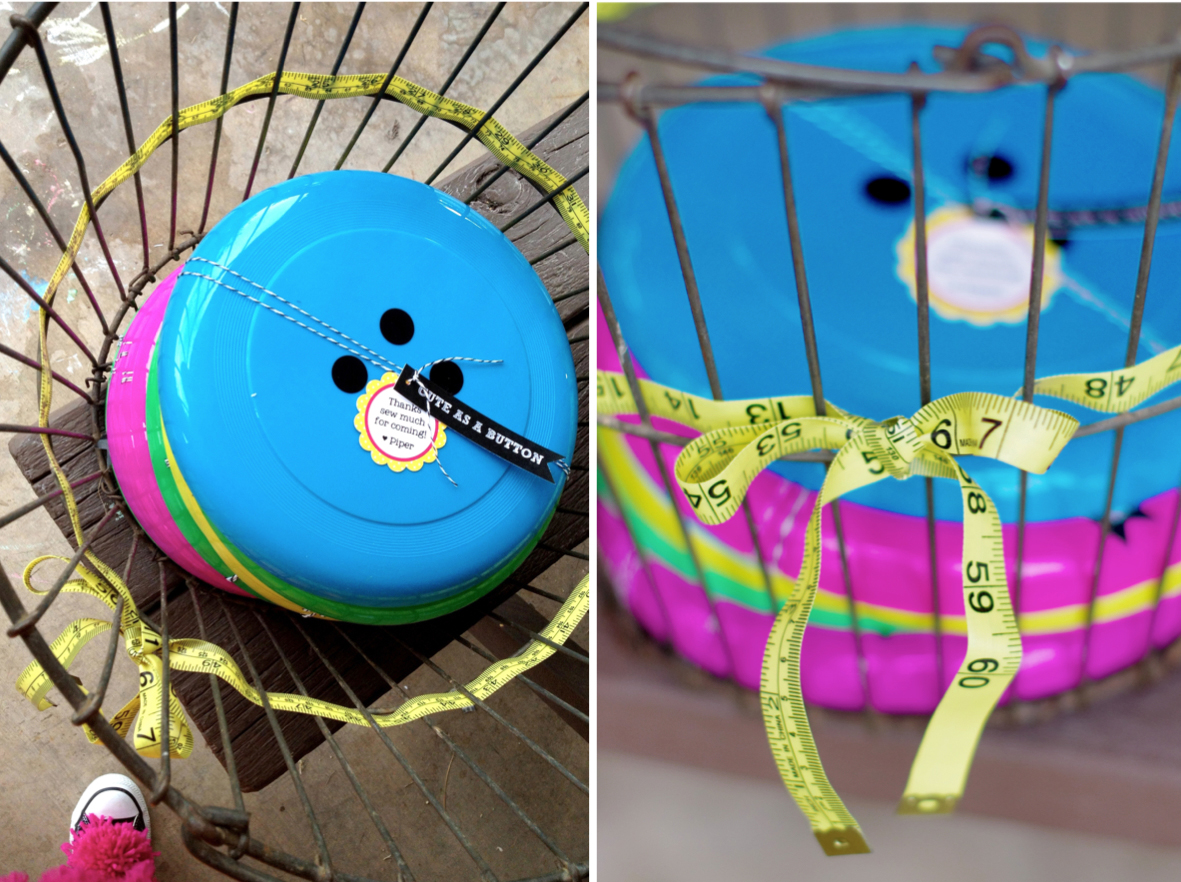 The finishing touch is our printable Lalaloopsy Favor Tags, which you can get personalized with your child’s name. The party favor tag set includes two different labels that hang charm-bracelet style from string tied around each frisbee. 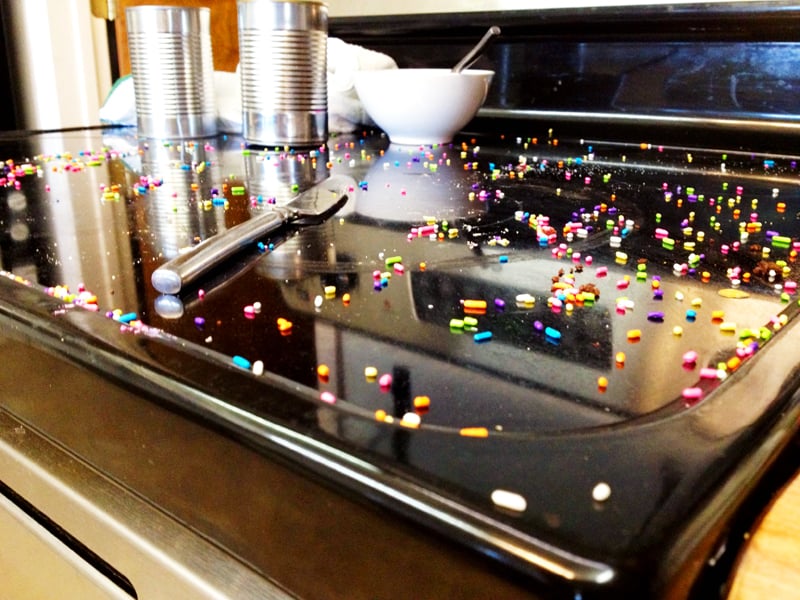 After the Lalaloopsy party was over I must admit my kitchen was a BIG mess. Months later the sprinkles are all cleaned up, but Piper is still talking about her Lalaloopsy birthday party… so I guess it was all worth it!

All the stunning photos came from wonderful Erika of Yellow Pear Photography.