While Superdad and I were at the theater last Friday for date night, I saw the displays for the new Mirror, Mirror Snow White movie that is coming out later this month. It reminded me that I never got around to sharing Piper’s Snow White Birthday Party from last year. 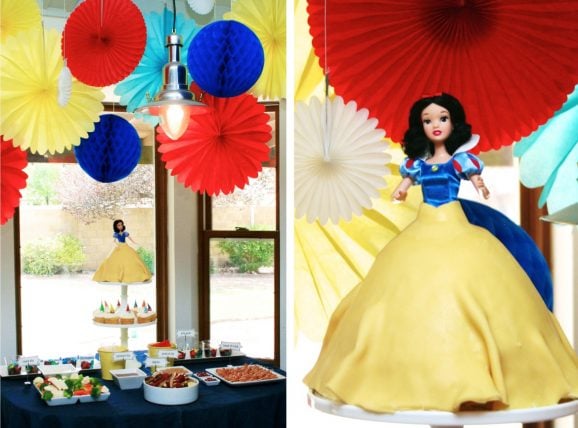 I’ll bet the new Mirror, Mirror movie will be great, but I doubt it can top the old Disney classic. Actually, since having little Piper around, I’ve gained a whole new love for the Snow White animated movie. I’ve always liked it, but to Piper this is one of the funniest movies on the planet — the various dwarfs’ antics really get her going. I just don’t think I’d ever really appreciated Snow White until I sat through it next to Piper and listened to her contagious laugh.

So when it came time for picking a birthday party theme for her fourth birthday, Piper settled on Snow White. Here’s all the wonderful details from her party (including freebie Snow White party printables — aren’t you excited?!) Be warned this is a long post, but you absolutely must NOT stop reading until you see my incredibly adorable Seven Dwarf Ring Toss, OK?

For the Snow White party invitations I knew I wanted to do something with the whole “Mirror, Mirror on the wall” thing. Since mailing actual mirrors would have been problematic, I found some super-shiny foil metallic paper at a local paper store (similar to this). I used a 2-inch circle punch to create the circular mirrors.

An interesting little aside, I had been planning to buy an oval punch since I’d always thought the Magic Mirror was an oval shape, but when I re-watched the movie to write down the words the Mirror says, I was surprised that the mirror is in fact a circle shape! 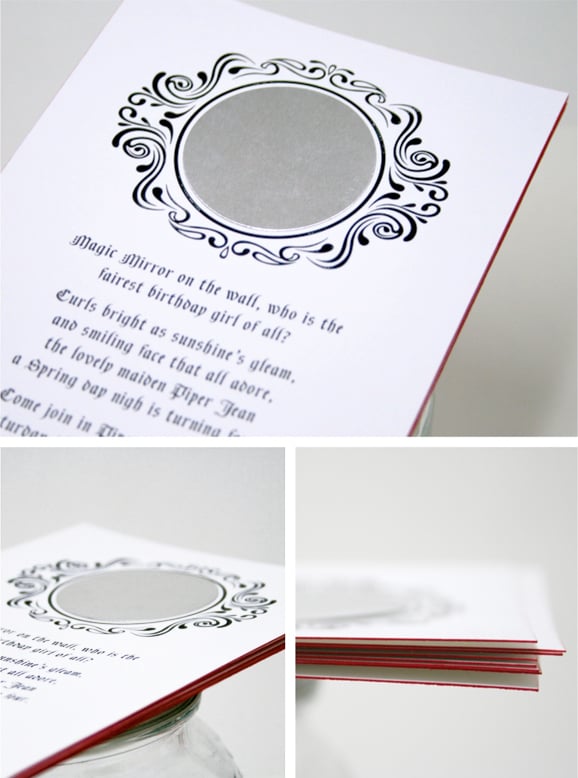 I’m so proud of my poetry skills in rewriting the Magic Mirror’s prose to fit Piper’s birthday invite that I’m going to share the exact wording with you here:

Magic Mirror on the wall, who is the
fairest birthday girl of all?

Curls bright as sunshine’s gleam,
and smiling face that all adore,
the lovely maiden Piper Jean
a Spring day nigh is turning four.

After the invites were all finished I felt like they needed a little shot of color. That is when I decided to color the edges with a red marker. I think it was just the right touch — adding a hint of color and fun while still keeping with the eerie charm fitting of the Magic Mirror. (Get your own Snow White birthday party invitation template in the Supermom Co-Op.)

As guests arrived at the party, we set them to work on an easy craft making these Dwarf Beards. Beforehand I used our Seven Dwarf Beard template, to cut out of felt a simple beard shape for each child. An easier alternative would be to print the template on cardstock and cutout. Use silver scrapbooking eyelets to make durable holes on either side to hold the elastic strap for wearing. 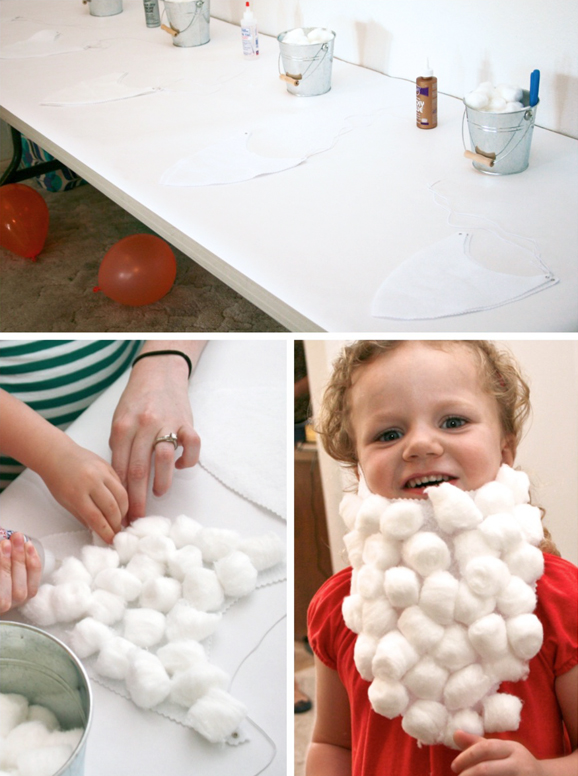 I had buckets filled with cotton balls and glue handy for the kids to cover their felt beards. We then tied white elastic cording through the eyelets and fitted the beard to the child. The kids got a kick out of wearing them around during the party.

This first game has got to be my favorite — the Seven Dwarf Ring Toss. I owe a big thank you to Superdad for pushing me to do this one. As the party was quickly approaching, I, being nearly 9 months pregnant at the time, pretty much just wanted to lay on the couch. I had done a big brainstorm of ideas for Snow White party games and activities for the party, and then was cherry picking the easiest options. Although I really loved this idea I had to dress up a bunch of 2-liter soda pop bottles to look like the Seven Dwarfs — it sounded like way too much work.

I’m not going to lie and say it was super easy, because it wasn’t. In fact, the main reason it took me so long to get this party posted (aside from the whole having a baby a week later thing) was that I had originally planned to make templates and full instructions for creating these bad boys, but, alas, never a dull moment around here. So sorry dear friends; the best I have by way of instructions is this: get a bunch of felt in various colors, good pair of scissors, glue gun and pack of googly eyes, then sit down with a good friend and let your creativity go. Oh yes, I should also mention that I used leftovers of the metallic foil paper from the invitations to make the shiny belt buckles.

Really can you think of any cuter party game? These guys are so adorable. I still can’t believe how great Sleepy looks (front and center). Those droopy eyelids were all Superdads idea — pure genius!

Of course the kids loved playing the Seven Dwarf Ring Toss as well. After the ring toss, we headed outside for our Dwarf’s Mine Treasure Hunt. 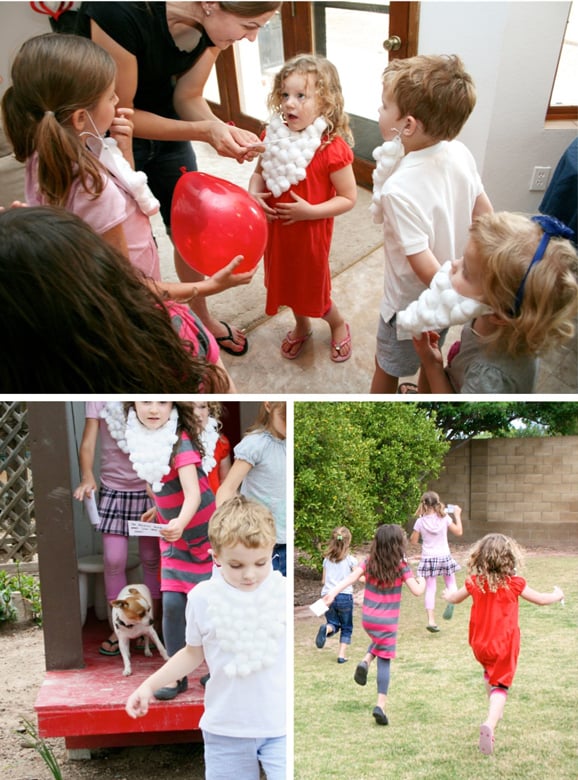 Superdad created and hid clues around the backyard. My favorite part of the hunt was watching the kids scurry around with those fun dwarf beards on. 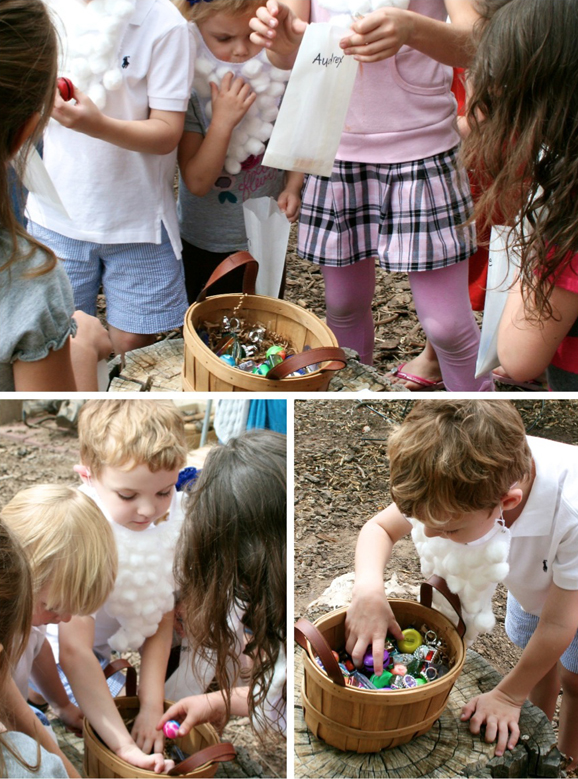 Once the treasure was found, we passed out bags to each of the kids with their name on it so they could divide up the loot, which consisted of shiny and colorful, glass mosaic tiles from the local craft store mixed in with bouncy balls, rings and other little toys from a local party store.

Next we played our Wishing Well Coin Toss Game. In the Snow White movie, the princess sings her famous “I’m Wishing” song into the well. Inspired by that scene, we got a silver bucket and filled it with a few rocks to create our “well.” Then we passed out pennies to the kids and let them take turns trying to toss their pennies into the well. Totally simple right? I seriously thought they’d tire of this activity quickly, but guess what? The kids LOVED it!

We had a jar filled with pennies and the kids were at it for over 10 minutes tossing every coin at the bucket — quite a few made it in there.

Also thought I’d mention that this game was no problem at all to clean up. Although my entry way was littered with dozens of pennies, I told my girls they could keep whatever ones they picked up. They quickly got their piggy banks and the pennies disappeared in no time!

Our last game was called Pass the Poison Apple, which is a variation on Hot Potato. I helped the children get into a circle and then we passed a red apple around while music from the Snow White Soundtrack played. When the music stopped, whoever held the Poison Apple would faint and die just like Snow White. Then the music would restart, and we’d keep going until everyone had fainted. 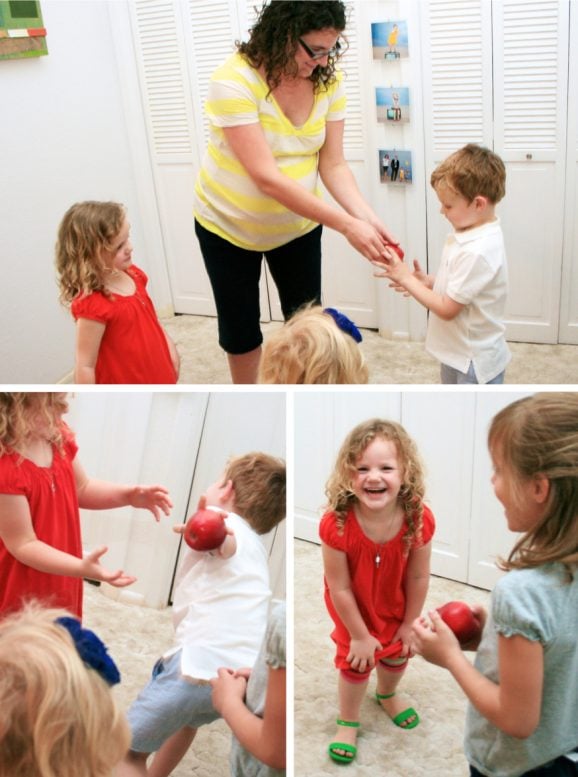 When Piper heard me discussing this a few weeks before the party, she was insistent that there should be a Prince Charming come and kiss everyone to wake them up. I tried to explain to her how impractical this idea would be (who exactly was I to get to kiss everyone, right?), but she was completely unyielding. Eventually I convinced her that we could have her hand out Hershey’s Kisses candies to everyone as a cure, and this idea settled it, but on the day of the party we both completely forgot about the Kisses. 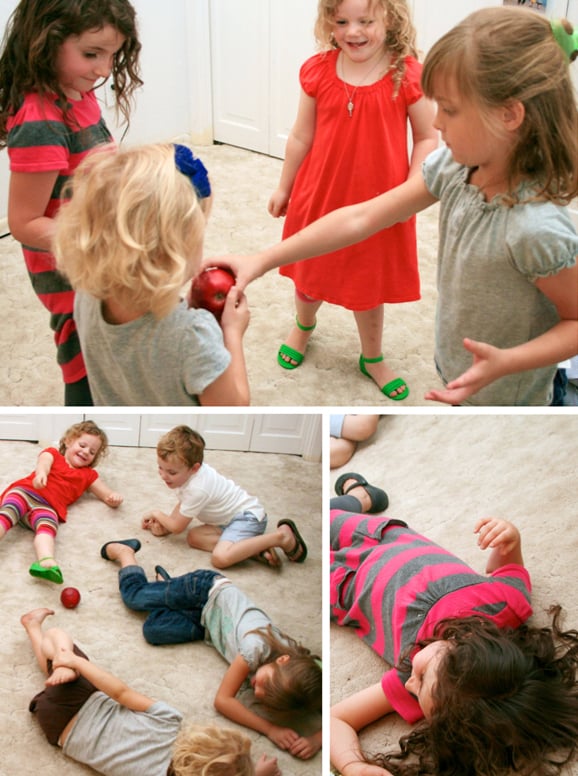 In truth I selected this game because all it required was music, which we already had, and an apple — HELLO, EASY! So I was totally shocked by how much the kids enjoyed playing it. They really got into the whole fainting part and were super dramatic. We played it three different times because the kids were having a ball, and we adults were getting a kick out of the kids’ acting skills. 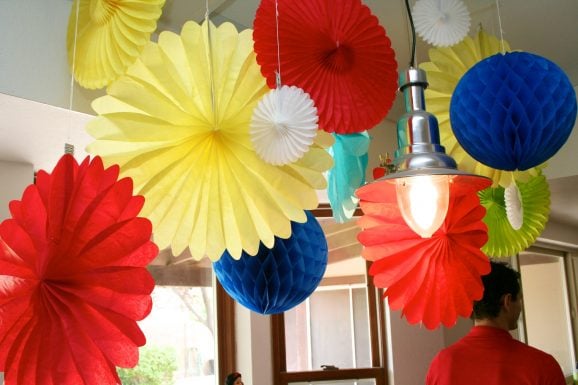 We carried the Snow White theme into our party food table as well. Hanging above was a brightly colored collection of honeycomb fans and balls, which remind me of Snow White’s dress. We served Not-Poison Apples with yummy caramel or peanut butter dips. The Seven Dwarfs spend their days dig, dig, dig, digging in the mine, so we offered cups of Jello Gems. 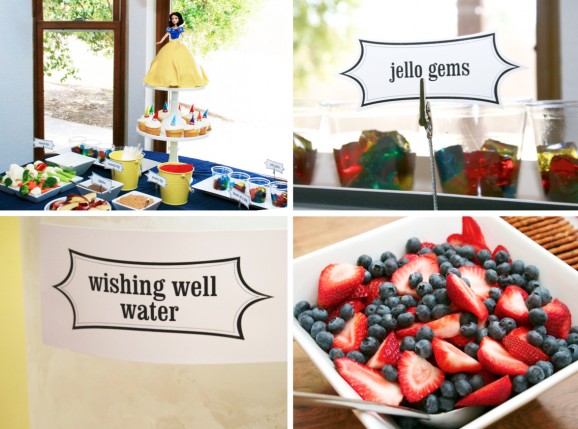 Oh, and remember what the huntsman brought back to the evil queen instead of Snow White’s heart? Yeah, we served Heart of a Pig with ketchup. Kind of gross, but kind of clever, right? 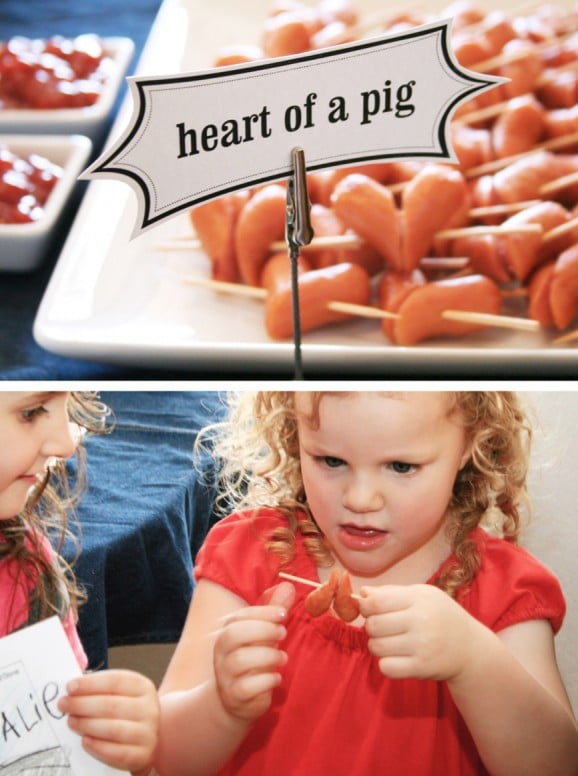 In case anyone is interested, I made a freebie download of our Snow White Party Food labels.

Finally we have the birthday cake! I surprised Piper with this Snow White Princess Cake. It was my first attempt at using fondant, and I’m pretty pleased with the results. I feel a bit like I cheated though since I used pre-made fondant (that was already dyed yellow and everything), so essentially all I had to do to was roll it out and drape it over. Still it was plenty of work. 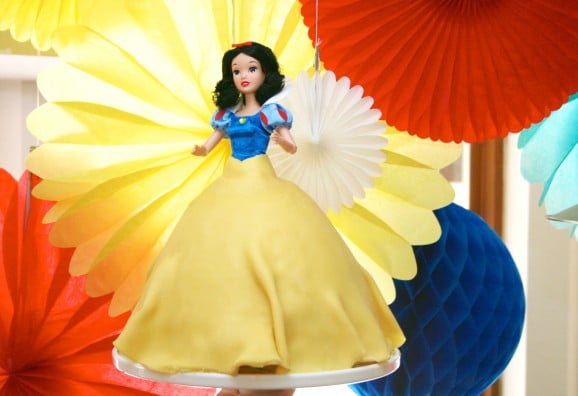 I baked the cake using this pan. I know they sell these princess torso pick things that you can stick into the cake and pipe on a frosting dress, but that would require much more work than sticking an already dressed doll into the cake. So I bought a Snow White doll and left the dress on. I wrapped the doll from the waist down in foil and plastic (to protect her dress from the sticky insides of the cake). She was a bit tall and at first I was worried I’d have to cut her legs, but I made it work without such drastic measures. 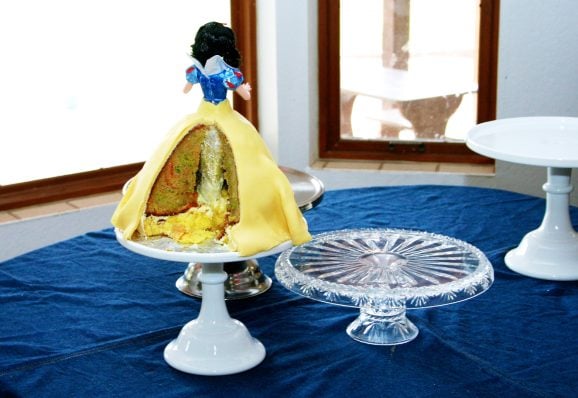 This post-party pic lets you sort of see the doll’s legs hanging out inside the cake.

We also made Seven Dwarf Cupcakes that were frosted with a large open tip in white, hinting at the dwarf beards. They were topped with Hershey Kisses wearing felt cone hats and googly eyes. 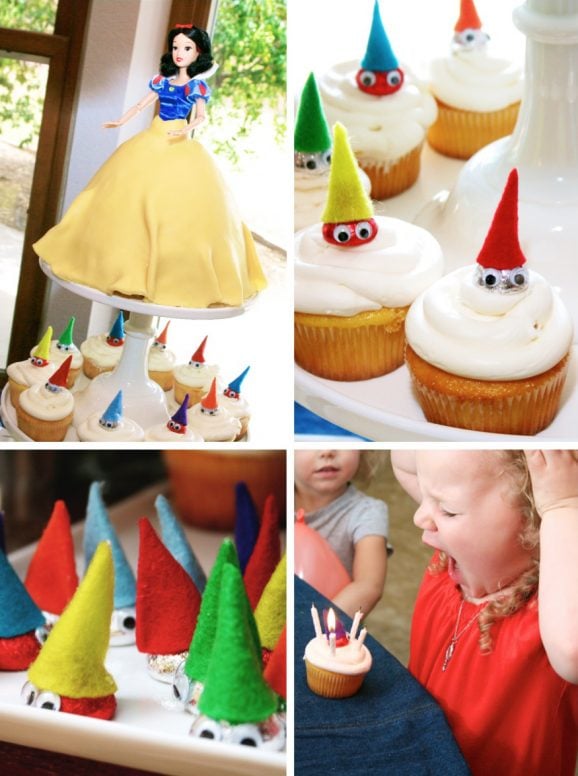 Inspired by another of Snow White’s songs, we sent all our party guests home with a fun wooden bird whistle packaged up with our “Whistle While You Work” party favor tags. Download the freebie printable Snow White Party Favor Tags.

Phew you made it! So as I was looking back and remembering this party, I’m really excited about all these fun Snow White party game ideas. Literally as I was prepping these photos for the post, I kept saying this is my favorite game, then I’d move onto the next one and would be like, “No, this one has got to be my favorite…” and it kept going like that until I realized that really all the games were so cute and fun. Also the games were super simple (except the Dwarf Ring Toss but those are so cute that it doesn’t matter how much time they took to make). I mean apples, pennies, a bucket — this is simple stuff! A good reminder that simple things plus a little creativity makes magic with kiddos.

So were you able to pick a favorite game? Do tell!