Since last week I was gushing about my new computer, I figured it was time for an update about the much more important new addition in my life — Miss Modette. I wanted to share these fun pictures from Modette’s first bath. Clearly since she is 3 months old, these were taken a while ago, but being a few months behind on editing photos is totally excusable when there is an adorable baby to hold and coo at, right? 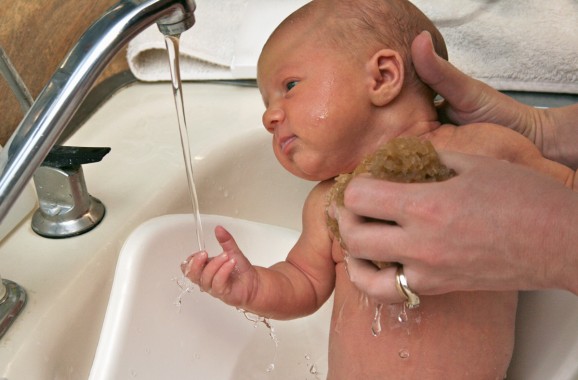 I love this shot that Superdad caught with the water dropping into Mimi’s hand. She was really calm and soothed by the running water — a total opposite of the screaming frenzies that were the first-bath experiences for my previous two kids. I think I owe this success to that little white foamy thing. It’s called a Puj Tub. 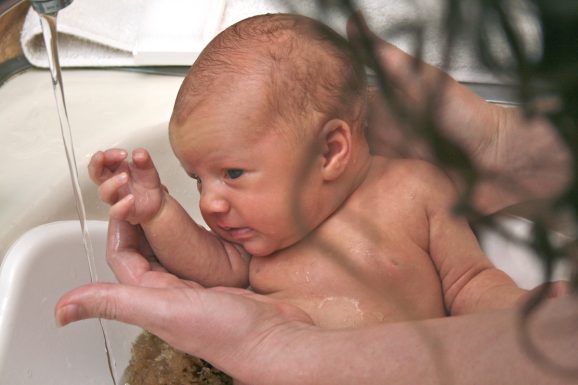 Bathing a newborn can be so awkward, and my personal preference is to use the kitchen sink. I had one of these Puj things sent to me a few years ago, but I haven’t had a baby to try it out with until now. It’s this genius foam piece that folds up and fits into the kitchen or bathroom sinks for bath time. The soft material is nonslip and adds cushioning that protects baby from the hard, cold sink. The Puj also cradles baby, which makes washing easier — it’s kind of like having a third hand!

After two kids, I thought screaming was just a part of first baths, so I’m pretty impressed by how much Mimi enjoys the water. She’s even patient while I scrub her head with the Bean-B-Clean brush that has totally kept Cradle Cap away — another issue that I couldn’t seem to overcome with either of my first two infants. This brush is really similar to surgical scrub brushes and has super-soft, almost sticky rubber bristles. My other kids both had Cradle Cap, but I’ve been using this brush faithfully for Modette, and she has never developed it. 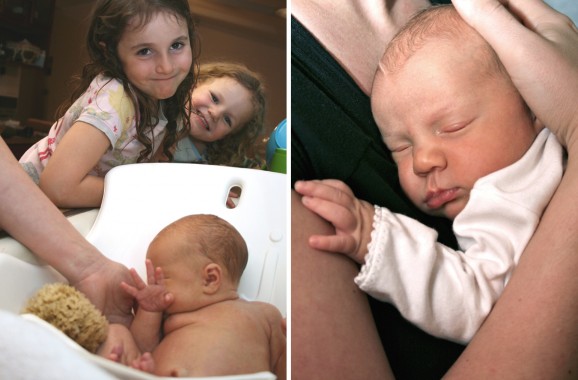 After toweling off and diapering comes Mimi’s favorite part of the bathing routine: a gentle baby massage using the Organic Whipped Shea Butter that I make. I think that’s my favorite part too! Bettijo is the founder and designer of Paging Supermom where she shares what she's dreamed up for family fun. Known for practical and kid-friendly activities, free printables and simple ideas for holidays. She is a single mom of three girls and one boy. Bettijo was a guest on the Martha Stewart Show and has frequently appeared on local television. Her work has also been featured in national magazines including Real Simple, O, Redbook, Parents, Family Circle, and Health. During quieter moments, she enjoys art, retro-modern design, photography and making new things. Bettijo lives with her four kiddos in Phoenix, Arizona.
Power Bio Box by Zyra App
You are here: Home super-tips Baby’s First Bath
Title:
Baby’s First Bath
Authors:
Categories:
Mentions:
babies, training
Keywords:
Not Specified
Last Updated:
June 26, 2021