We had so much fun at the gender reveal party for Modette that we knew we had to have another one for this baby. Aimée came up with a brilliant “Yippee!” theme that I absolutely adore. It was perfect since we combined my gender reveal with our New Year’s party and truly this decor works well for either occasion so even if you’re not doing a gender reveal feel free to use these adorable Yippee printables fo a fabulous and family-friendly New Year’s Bash! 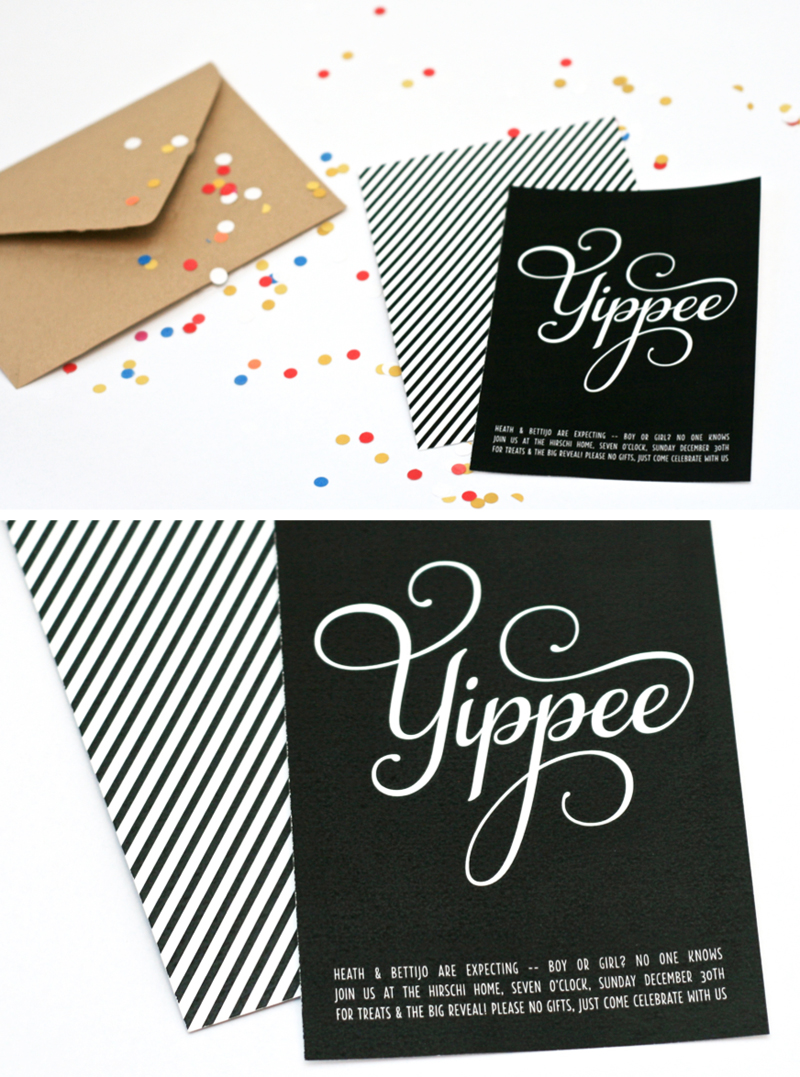 Our Yippee theme meant an overload of those fun celebratory details: popcorn, balloons, party blowers, streamers and confetti… they were all incorporated into our party!

To start things off with a bang, we included colorful confetti in the envelope with our invitation. Hosting your own gender reveal party? Get this printable invitation personalized with your party details in our Supermom Co-Op! 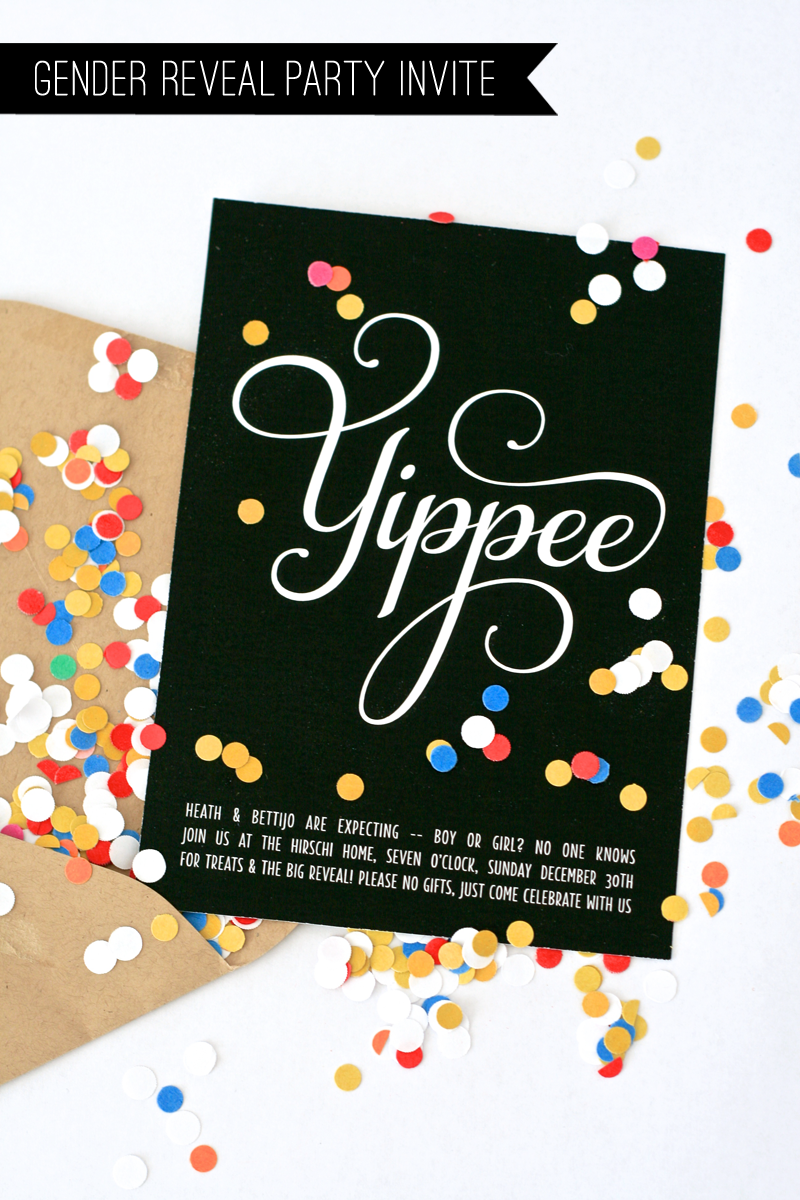 When you don’t know whether the party should be blue themed or pink, picking a color scheme can be tricky. We opted for strong black and white elements and threw in splashes of vibrant colors with confetti and balloons. 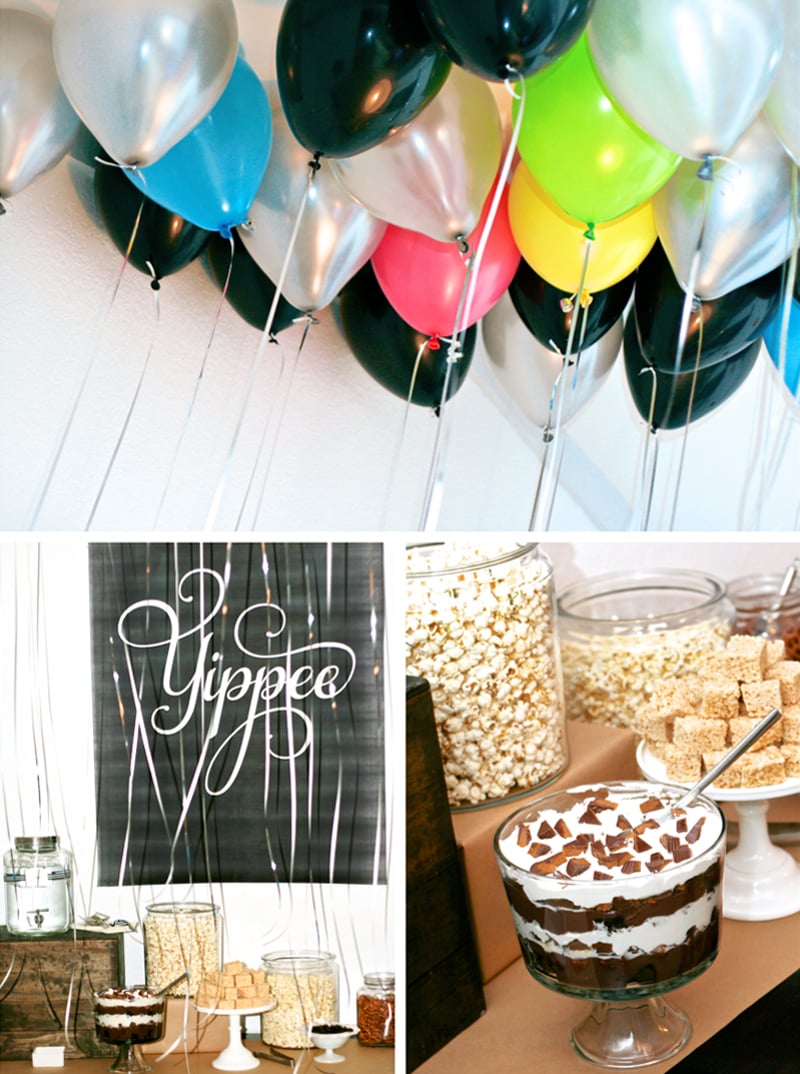 Don’t you love the gigantic “Yippee” poster hanging behind our dessert table? It can be printed at your local copy center using our Super-sized Poster template. Ask for a black-and-white, large-format or engineering print — it’s a big WOW for under $10! 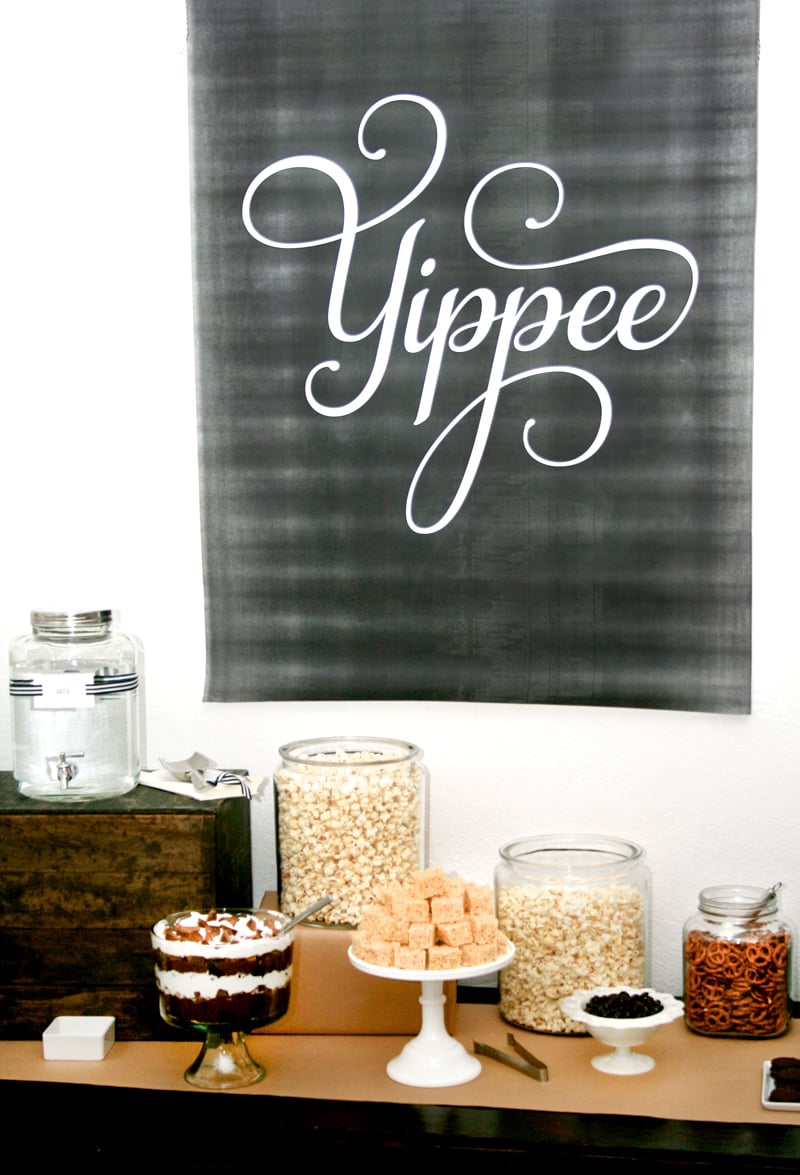 We offered up all kinds of sweets and munchies. The Herb + Olive Oil Popcorn made using this recipe was a big hit, and so was the delicious Reese’s Peanut Butter Cup Trifle (thanks Debbie for making it!). We also had piles of krispy rice treats, Oreos and gooey chocolate cookies… now I’m getting hungry! 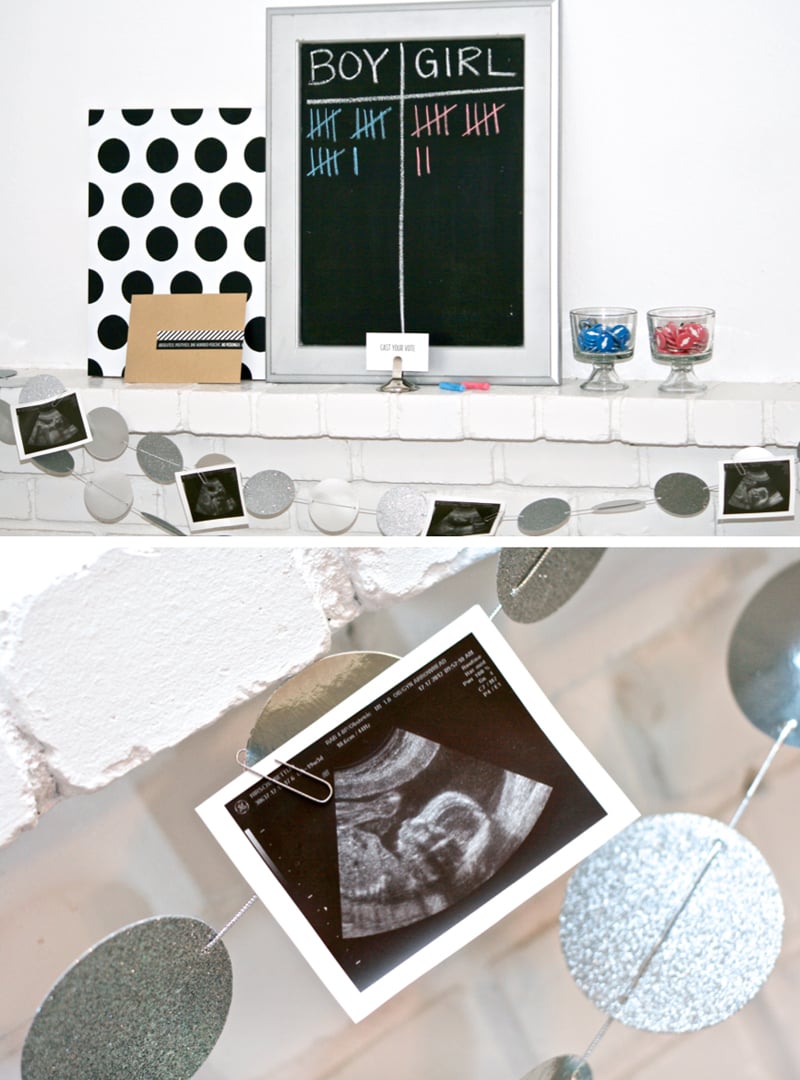 As soon as guests arrived, we asked them to record their vote (team boy or team girl?) on our chalkboard tally and put on a corresponding Boy or Girl button to reflect their vote.

One of the highlights of our last Gender Reveal party was a game where guests suggested names for boys or girls and then my husband and I took turns reading the names out loud. We decided to do it again, and like last time, most of the suggestions were pretty funny (Buster T-Rex, anyone?) so everybody got a big kick out of it.

Then came the BIG moment! We did a balloon reveal last time, which was fun and easy, but as soon as Aimée suggested a confetti blast reveal I couldn’t get it out of my mind. We gave three people in the crowd striped confetti cannons that had been prepped ahead of time by my brother and his wife. The launchers were asked to simultaneously set off their cannons right as we opened our ultrasound envelope. Afterwards we wished we’d had them stagger the launches — one after the other rather than at the same time — to make the confetti shower last a bit longer. 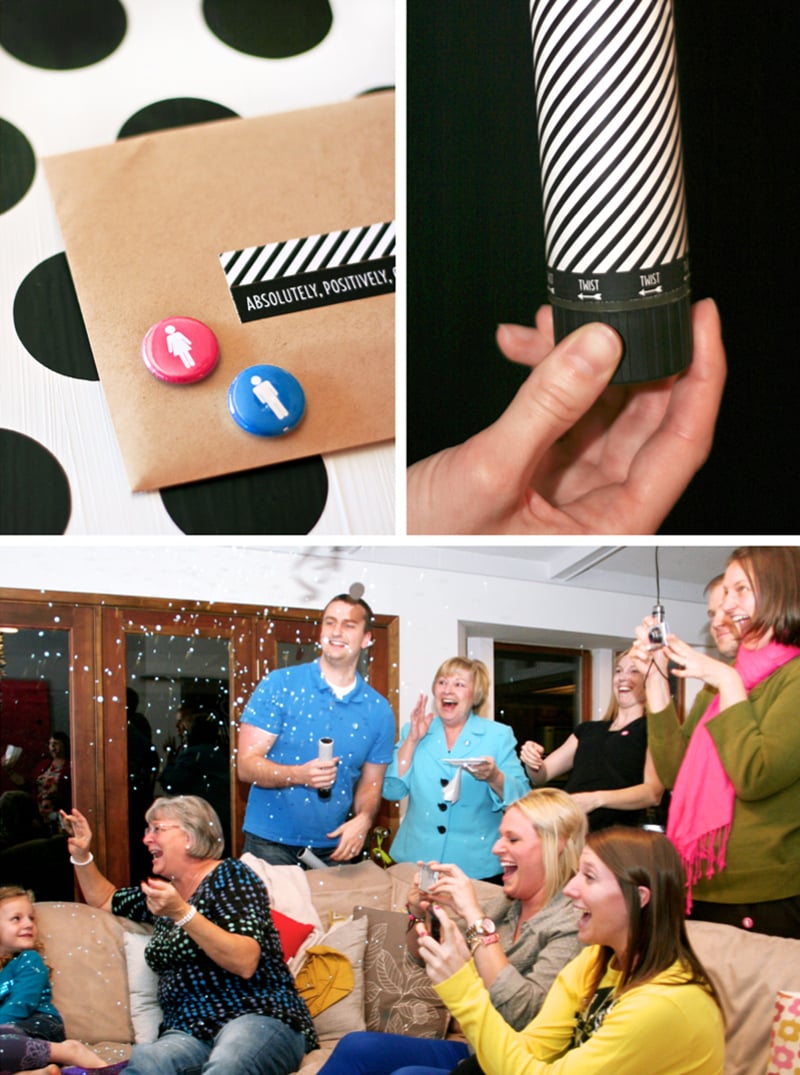 As you may know, we already have three girls, and I was sure this baby was going to be another one… so I was totally shocked when BLUE confetti came raining down on me! 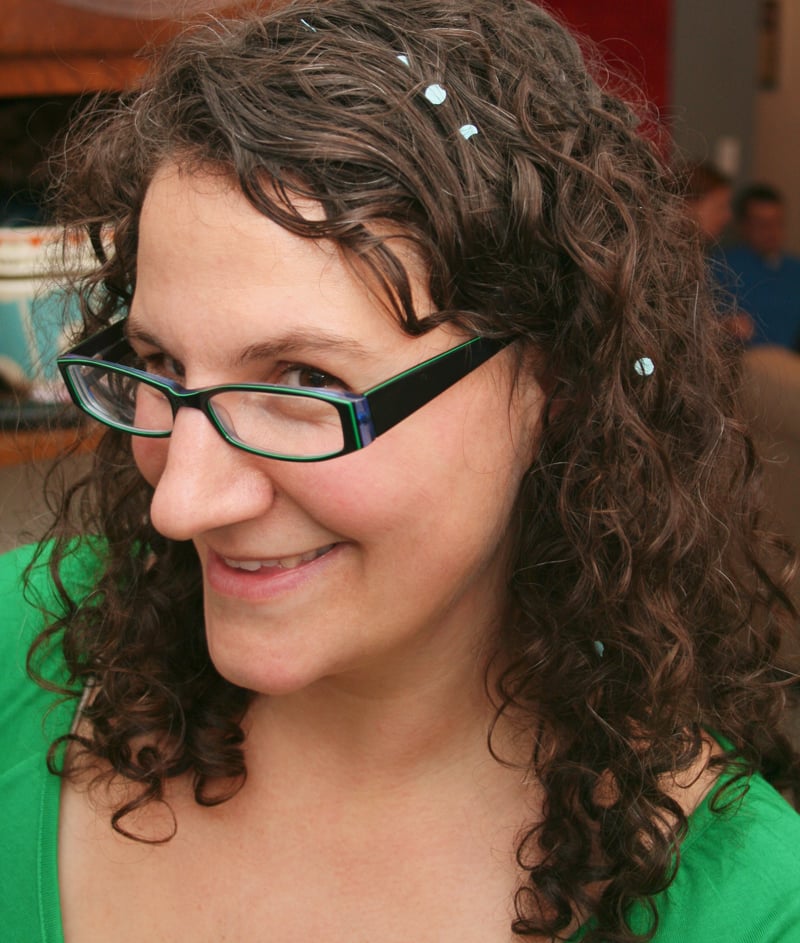 I really love the official-looking Ultrasound Record I created to take to my sonogram appointment. It’s a free printable you can download here along with the “No Peeking” and diagonal-stripe envelope wraps to keep everybody honest. Heath did the honors of opening the envelope just before the confetti launch. 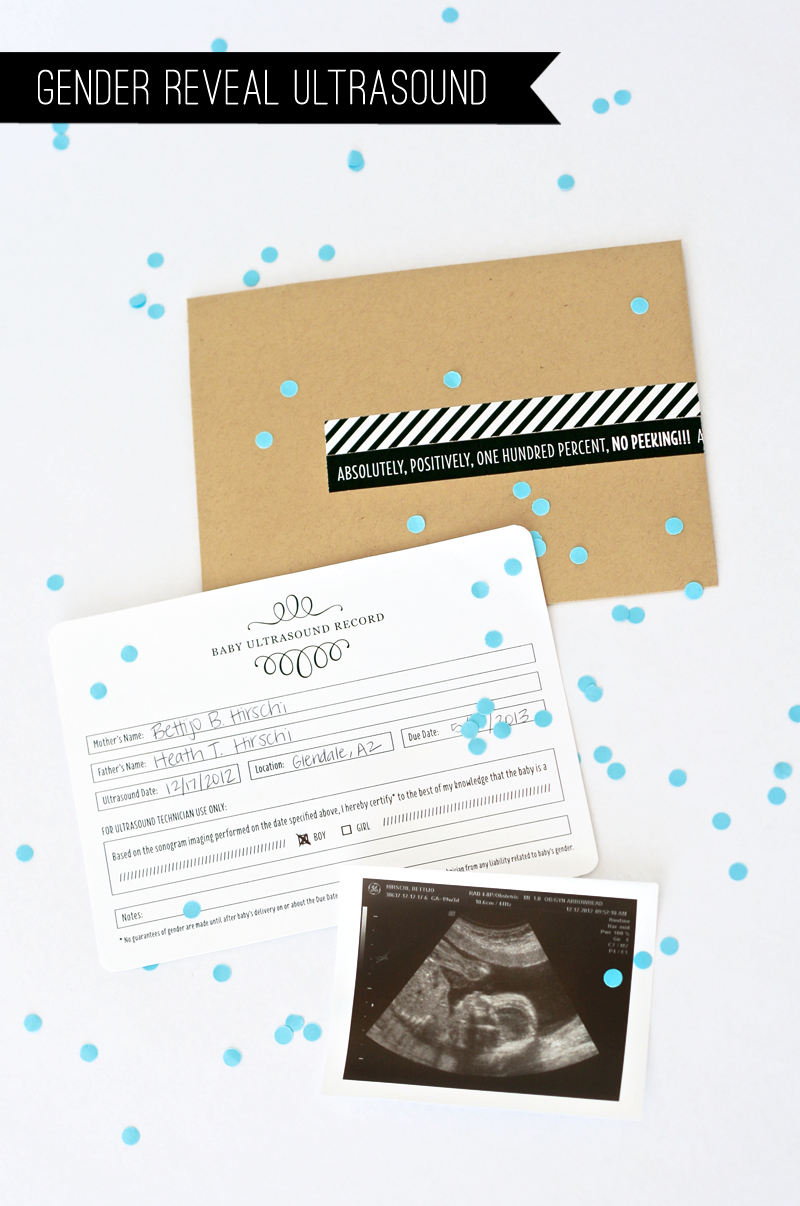 I had a tough time figuring out how to do a big confetti blast that would keep the color of the confetti a secret and not cost me in the neighborhood of $100 for a real confetti launcher. Inspired by this tutorial from blog Oh Happy Day, and with some help from my clever husband, we made three DIY Confetti Cannons from 8-inch confetti poppers found at a local party store. The poppers are labeled as one-time use, but as long as you buy the ones that are spring-loaded and do not use compressed air, you can take them apart, reload and reuse.

TO MAKE: Twist to launch the confetti that comes preloaded in the popper. Peel off the original label and take the now-empty canister apart and reload the spring. (Having trouble figuring out how to do it? Check out the photos here). Approximately half a cup of confetti is needed to fill each launcher. Trace the canister’s circular opening onto cardstock and cut out two circles. Place one inside the canister to help prevent any confetti from falling into the spring mechanism. Fill the canister with confetti in the appropriate color and top with the other circle. Print, cut out and apply our free printable DIY Confetti Cannon Label. The label is a bit long for the canister so that it can hang over at the top and seal the cardstock circle into place.

If YOU also want to be surprised at the big moment, you will need to give someone else the job of making or buying confetti in the correct color and reloading the launchers.

I entrusted this task to my brother Aaron and his wife, and they were total troopers. We needed 1-1/2 cups of confetti — that might not sound like a big project, but they used both single and three-hole punches and tell me it was pretty time consuming (THANK YOU Aaron & Elena!). 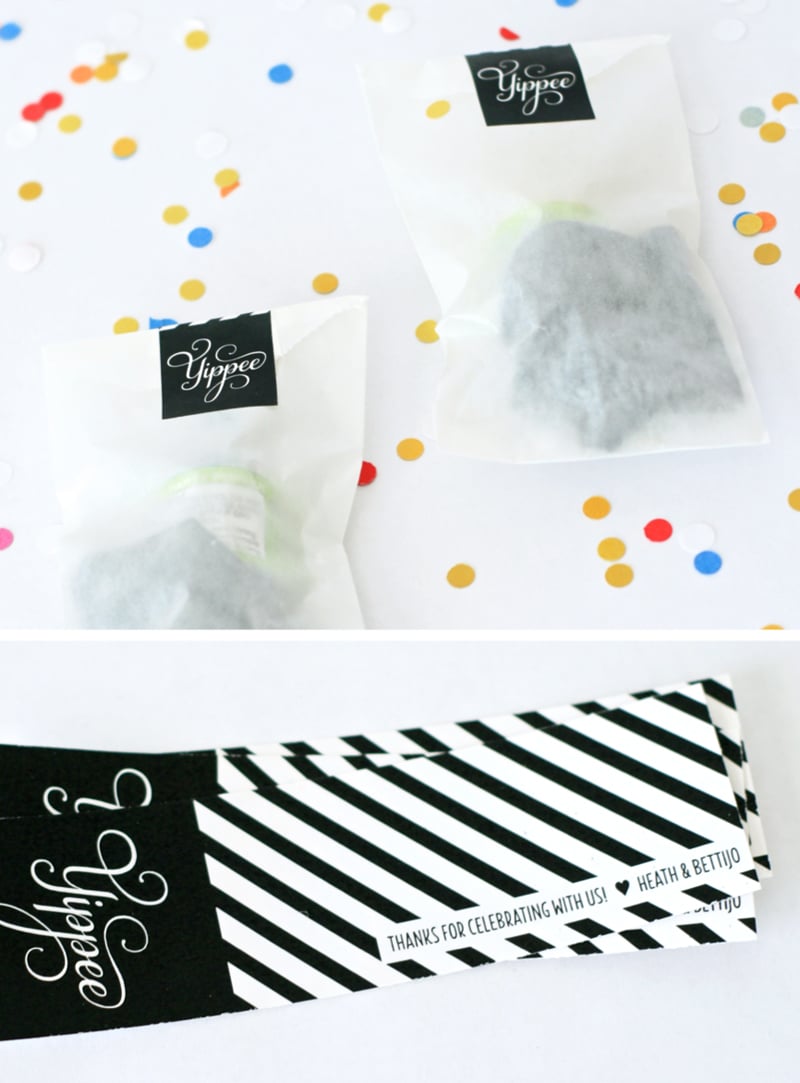 We sent our guests home with little Yippee Packs as party favors. Included was a mini zip-top bag filled with confetti, a blowout, balloon and champagne party popper, packaged in a glassine bag with our long, printable labels sealing them shut. To get your own personalized “Yippee” favor tags visit our Supermom Co-Op. 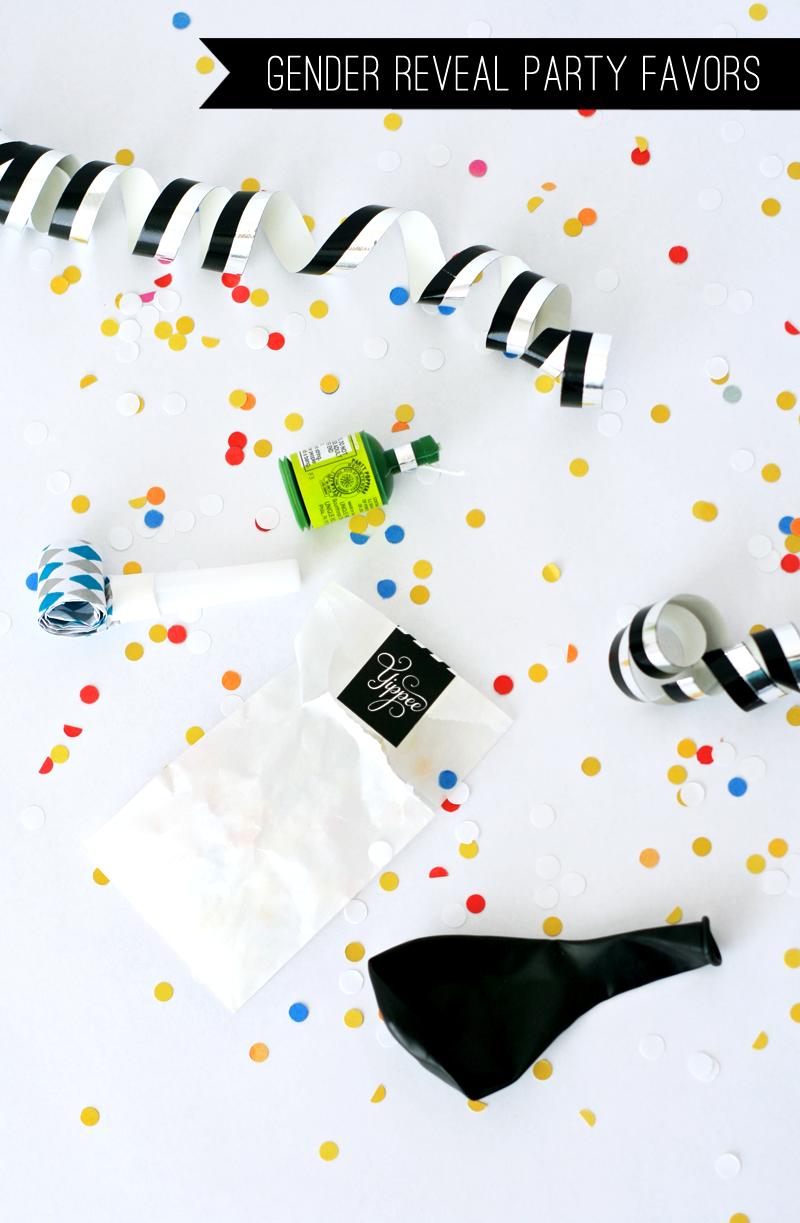 Phew.. that was quite a party! If you made it all the way through that post here is a quick reference of all the printables for this party:

Don’t forget the Boy & Girl Buttons… these were a big hit and guests loved taking them home as a souvenir. Buy them in our Supermom Co-Op.