Disney’s new Cars 3 movie hits theaters today. Whenever the third release in a movie franchise comes along, there is bound to be one big question in mind: is Cars 3 worth seeing? Unfortunately, the answer to that question is not as clear cut as I would like.

Finding out is Cars 3 worth seeing will depend largely on who you want to take to the movie with you, and the answer will probably surprise you. If you and your spouse are heading out on a date night, and you’re wondering is Cars 3 worth seeing? The answer is definitely YES! However, if you’re thinking of a family movie night with the littles, then you better keep reading.

I often get invited to see advance screenings of new movies, and I usually get to bring along a guest. My kids will call dibs on movies, sometimes months in advance. My older three girls have all taken turns, but I’ve never taken Rockwell. He’s been to the movie theater plenty, I’ve just never taken him with me to a pre-screening. So when I got the Cars 3 invite, I told the girls it was Rockwell’s turn — he was EXCITED!

He loves the Cars and Planes films, and he was asking me several times daily if we could go to the movie yet. (Oh, I really did know better… should have waited to tell him about the movie until the day of LOL!) The Cars 3 screening finally came, we got great seats, and we were both really excited. The screening crowd had fewer kids than would be normal for an animated movie, and I think Rockwell was the only kid on our row.

The movie opens with our good friend Lightning McQueen tearing up the track, until suddenly a rookie races up out of nowhere and takes the trophy. Being a good sport, Lightning handles his loss fairly well, especially since getting beaten by such a cocky new guy has to be rough.

Next we meet a new generation of racers. They might be rookies, but training with high-tech simulators and equipped with edgy new designs, these Next-Gen racers are picking up the pace. Leader of the pack Jackson Storm is blazing fast and breaking all the records. One by one Lightning’s racing buddies disappear into retirement, being replaced by the more modern race cars.

Lightning pushes himself too hard trying to regain his champion status. Then comes this dramatic movie moment you may have seen depicted on the Cars 3 posters. Oh I won’t call it scary, but it is definitely intense. In that moment everything really does change.

After plenty of recuperation, Lightning decides he wants back in the game, but he will need help from some new friends who understand this generation of high-tech racers. Eager and young Cruz Ramirez (voice of Cristela Alonzo) is ready to take on a “Senior project” at the new, high-tech training facility built for Lightning by his sponsor Rusteeze. This part is where we get to enjoy a lot of totally hilarious quips about old age, particularly in relation to how younger people see the not-so-old, as old decrepit geezers. I was laughing pretty hard, right along with the rest of the adults in the theater. Only Rockwell wasn’t getting any of these jokes. 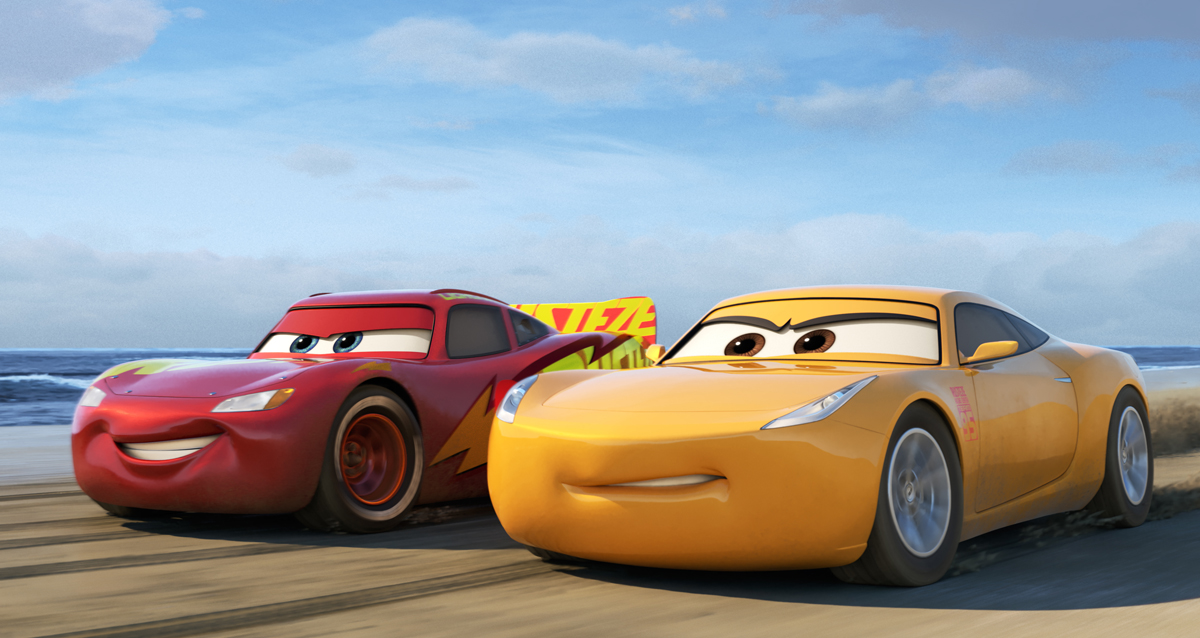 The slick new simulators and modern training regimen, aren’t working for Lightning, who longs to get his tires dirty again. As Lightning tries to find his way, he looks to the mentor of his past, the late Fabulous Hudson Hornet, and other racing legends for help.

I hadn’t noticed that Rockwell’s attention was waning because I was thoroughly enjoying the film, but a little more than half way through Cars 3, in a fairly climatic point, Rockwell reaches up and announces, “I’m ready to go home Mom.”

I was taken aback, what? “No honey, the movie isn’t over yet. Don’t you want to keep watching Cars?”

“I’m tired. Can we go home now? I want to see my family. I’m pretty sure I can watch Cars 3 on Netflix, right mom?”

Seriously. I wish I was making this up guys. I couldn’t bring myself to leave because I wanted to see how it ended. Though, for the remainder of the film I had to hush and rock my four year old like he was a toddler. Then almost at the end, there are a few action-packed scenes that he settled in and watched contentedly.

Afterward, I was trying to figure out why Rockwell reacted this way. It’s not that he didn’t like the movie — when he got home he said he loved it, was excited to put on the Cars temporary tattoos he’d received, and hung the movie poster on his bedroom wall. He didn’t leave with a negative impression, but the movie didn’t hold his attention. He also wasn’t really that tired — we drove for 30 minutes home from the theater, in the dark, and the boy was still awake when we got home.

Eventually I concluded that Lightning’s tragic crash changed a lot more than even Disney was planning on. It turned Cars 3 from a fun-filled kids movie, into a mature tale of reaching limits and finding peace. At its root, Cars 3 is a story about getting old and figuring out how to accept that you can’t stay on top forever. Clearly not a storyline that a four year old is going to relate to. One of the hallmarks of Disney’s animated movies are their unique ability to appeal to the whole family. It’s hard to cater to such a wide range of ages and attention spans. This film is more dialog intense than action packed, and I think Cars 3 ends up being a bit out of reach for the youngest crowd.

So Is Cars 3 Worth Seeing?

Now back to our question, is Cars 3 worth seeing… the easy answer is yes. I really wish I could tell you to take the whole family to Cars 3. It is an outstanding movie, but I would hate to be responsible for any parent having one of those uncomfortable and frustrating restless-kid-in-theater situations. I am not sure exactly what ages to recommend, because I’m honestly not sure if my 6 year old daughter would have faired much better. If you’ve got any kids under age four, you might want to save watching Cars 3 as a family for the DVD release.

But what are you doing tonight? Because I think you deserve a date night, and I’d like to recommend a thrilling, new movie about a shiny, red race car.

Is it weird after a review like that to share a free printable activity pack? Maybe a little, but remember Rockwell is still every bit as excited about Cars 3, just as long as he doesn’t have to watch the whole thing. LOL!

Bettijo is the founder and designer of Paging Supermom where she shares what she's dreamed up for family fun. Known for practical and kid-friendly activities, free printables and simple ideas for holidays. She is a single mom of three girls and one boy. Bettijo was a guest on the Martha Stewart Show and has frequently appeared on local television. Her work has also been featured in national magazines including Real Simple, O, Redbook, Parents, Family Circle, and Health. During quieter moments, she enjoys art, retro-modern design, photography and making new things. Bettijo lives with her four kiddos in Phoenix, Arizona.
Author Bio Box by HOI
Author:
Bettijo
Categories:
Mentions:
disney, movies
Keywords:
Cars 3 worth seeing
Last Updated:
June 26, 2021