Who knows what these are? Do you have a similar stack at your house?

I swear I have at least a dozen of those plastic detergent cups floating around my laundry room. Whenever I do a load of laundry I find a cup, fill it to the line with detergent and end up washing the cup with the load since I can never seem to get the detergent completely out of the cup any other way. It’s kind of annoying, but that’s just how laundry detergent is, right?

Leave it to the clever folks at Method Home to come up with a much SMARTER way of doing laundry. Method’s new Laundry Detergent comes in the smallest, cutest bottle because it’s 8-times concentrated. My favorite feature though is the pump cap — 2 pumps for a small load, 4 for average and 6 for a large or heavily soiled load. No silly caps and the thing is literally about the size of a shampoo bottle. SUPER!

Not only is the pump convenient, but it also allows you be more accurate with the amount of detergent you’re adding to each load. Which means you’re saving money by not overusing detergent, but we also learned that overdosing on detergent can cause all kinds of laundry issues:

:: Residue on clothes that leaves them stiff and possibly itchy to sensitive skin
:: Odor in washing machine because of residues trapped in the washer.
:: Longer washing cycles and more water used to rinse the load of excess sud 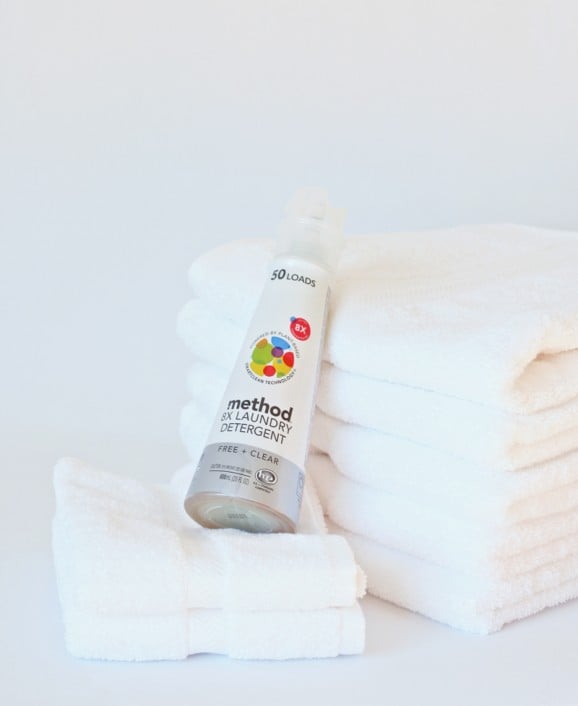 Of course the idea of a tiny bottle of detergent actually having enough cleaning power for 50 loads kind of leaves you wondering: “How’d they do that?” Turns out typical laundry detergent is actually mostly WATER! Method’s laundry detergent cuts out the excess water that dilutes many other detergents, which means not only do we get a nice bottle that takes up far less room in the laundry room, but it’s also easier on the environment. Method’s Laundry Detergent uses 36 percent less plastic and requires 33 percent less energy and oil to produce than most widely-available detergents.

We jumped at the chance to test out Method Laundry Detergent. Aimée used it in her front-loading machine with great results. I have a traditional, top-loading machine and was equally impressed. In fact, I recently bought brand new, all-white towels. I’ve been needing to replace our old ones that have grown stiff (which I’m thinking now is from built-up detergent residue, see above). So when it was time to throw a Spa Party for Piper’s sixth birthday (more pics to come next Fall after we get through the new baby craziness), I thought brand new, crisp towels would make the perfect party decor. 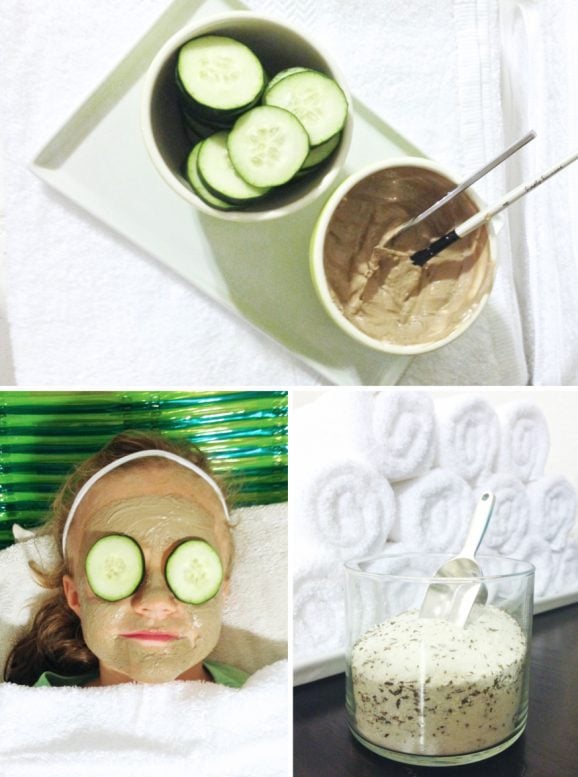 The towels did add a lot to the spa feel, BUT after the party, where we had clay face masks, dark black Dead Sea Mud pedicures, and an assortment of other staining concoctions, all of which of course made their way onto the towels…. I was really starting to regret using my new towels for the party. I’m pleased to report that Method’s Detergent was up to the task. I laundered the towels right away and with 6 pumps of the Method detergent, my towels are still looking brand new. 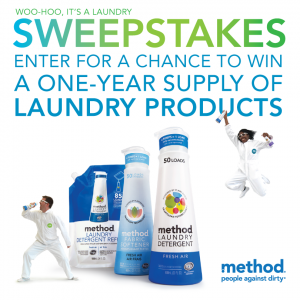 Bettijo is the founder and designer of Paging Supermom where she shares what she's dreamed up for family fun. Known for practical and kid-friendly activities, free printables and simple ideas for holidays. She is a single mom of three girls and one boy. Bettijo was a guest on the Martha Stewart Show and has frequently appeared on local television. Her work has also been featured in national magazines including Real Simple, O, Redbook, Parents, Family Circle, and Health. During quieter moments, she enjoys art, retro-modern design, photography and making new things. Bettijo lives with her four kiddos in Phoenix, Arizona.
Power Bio Box by Zyra App
You are here: Home parties Laundry Smarter & Piper’s Spa Party
Title:
Laundry Smarter & Piper’s Spa Party
Authors:
Categories:
Mentions:
fortress, giveaways, training
Keywords:
Not Specified
Last Updated:
June 26, 2021