While visiting my husbands family for Thanksgiving, our girls were exposed to some of their cousins’ boy toys. During this little break from all princess all the time, I noticed that they particularly enjoyed playing with the Nerf dart guns. So I’ve been on the lookout for foam-dart guns to use as stocking stuffers. Anyone noticed how complicated Nerf guns are these days? I kept visiting that aisle in stores and would become quickly overwhelmed by all these fully automatic blasters with extra bells and whistles like pop-out bipods and protective shields. I couldn’t find anything that resembled the simple dart guns I vaguely remembered my brothers shooting at me. 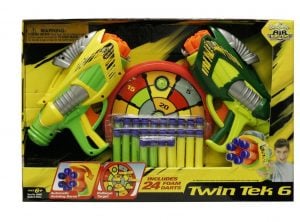 What I was hoping to find was some sort of “family pack” with four super-simple guns and a whole bunch of darts — seems like such a great idea to me, but couldn’t find one for sale anywhere. (Maybe next year, Nerf?) So last night I finally enlisted Superdad to help me wade through all the options. We decided to go with a couple sets of these Twin Tek Blasters. They aren’t quite the simple guns I had been looking for. They feature an automatic rotating barrel that holds six darts, but I realized that this little extra would actually come in handy for our girls who have some trouble with the loading and cocking. This way they get six shots before we have to help them reload. I also liked that I could get a two pack with a bunch of extra darts for just $10. They aren’t made by Nerf, and Superdad being a pretty loyal Nerf guy was skeptical at first, but the practicality of the rotating barrel combined with a significant price savings won him over. Bettijo is the founder and designer of Paging Supermom where she shares what she's dreamed up for family fun. Known for practical and kid-friendly activities, free printables and simple ideas for holidays. She is a single mom of three girls and one boy. Bettijo was a guest on the Martha Stewart Show and has frequently appeared on local television. Her work has also been featured in national magazines including Real Simple, O, Redbook, Parents, Family Circle, and Health. During quieter moments, she enjoys art, retro-modern design, photography and making new things. Bettijo lives with her four kiddos in Phoenix, Arizona.
Author Bio Box by HOI
Author:
Bettijo
Categories:
Mentions:
Not Specified
Keywords:
Not Specified
Last Updated:
June 26, 2021