Make note of the date… because today is the day we will convince you that you CAN in fact make your own pie crust! We know that some of the so-called “basics” of baking can often seem like anything but basic. I never thought I could be good at making pie crusts. Putting my own homemade fillings into store-bought crusts seemed to be as good as it would get for this Supermom. Then last year a friend showed me how easy it is to make your own crust. Before you protest, let me define “easy” here… so it’s not like chewing gum easy, but it is something that I KNOW you can do…. in less time then it takes to go to the grocery store and buy a frozen crust… for real. YOU CAN DO THIS! 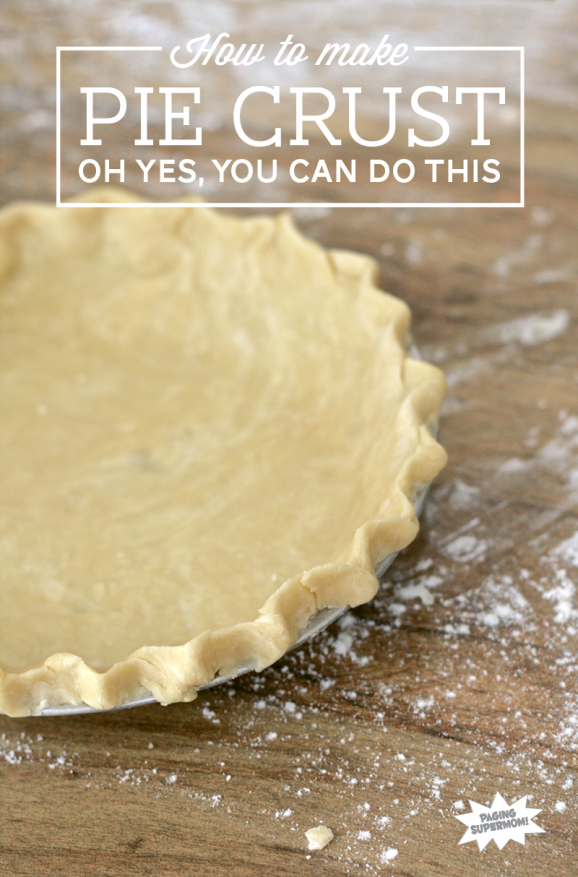 Okay, so now that we have the pep talk out of the way, let’s get started. I know you’re itching for the recipe, but before we get there I want to stress that when it comes to pie crust the recipe is actually NOT as important as these tips for working with the crust. If you have Grandma’s recipe that you truly love when SHE makes it, but have had trouble replicating it, try applying these tips to that recipe. (Don’t worry though, I have a fabulous recipe to share with you too!)

No. 1 – Dry ingredients first. This applies to a lot of recipes, but in pie crust it’s especially important because once you start mixing in the wet ingredients you have to be careful not to overmix. So make sure the dry stuff is well combined before proceeding. 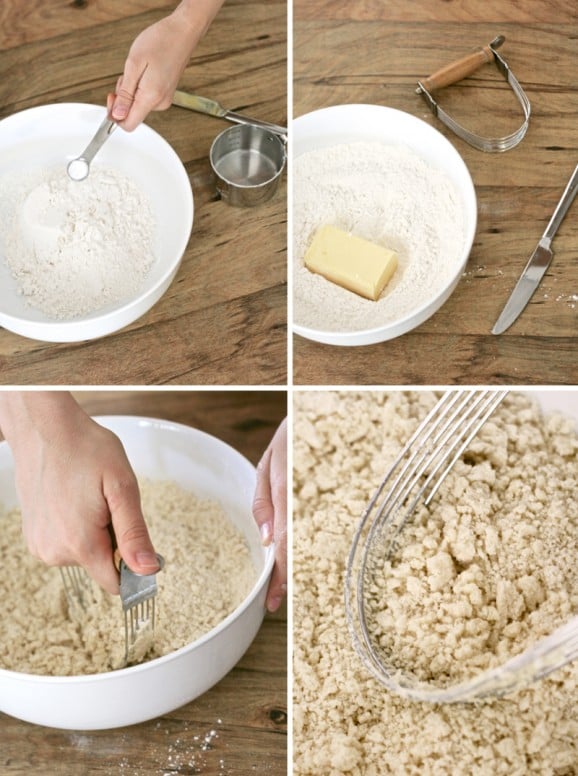 No. 2 Cut in your fats with a pastry cutter. Do not be tempted to melt your shortening/butter/lard and mix it in. The delicious flakiness of your crust depends on the chunks of fat being mixed throughout the dough with a pastry cutter. If you don’t have a pastry cutter you could use a fork but it would probably take you forever; therefore, I think a pastry cutter is an essential tool. A word about pastry cutters… that wire pastry cutter in the pics is the one I received at my bridal shower, and I think it is so cute. It totally works, but I have to work harder — this kind of pastry cutter works best. You want to keep cutting the mixture until you no longer have any large chunks of fat — this is the most time consuming part, but I find it strangely satisfying and older kids can totally help. Look at the bottom-right photo above to get an idea of the correct texture once finished cutting.

No. 3 Use ICE-cold water. Pie crust recipes usually call for cold water and they mean it — as in ICE COLD. (I think this again goes back to the not wanting to butter to melt, but not sure.) Now you don’t want any actual ice in your crust but before I start mixing my dough I put ice and water in a measuring cup (or pitcher depending on batch size) to chill. When it is time to add the water place your measuring cup into the ice water and let just the water into the cup like shown in the photo. 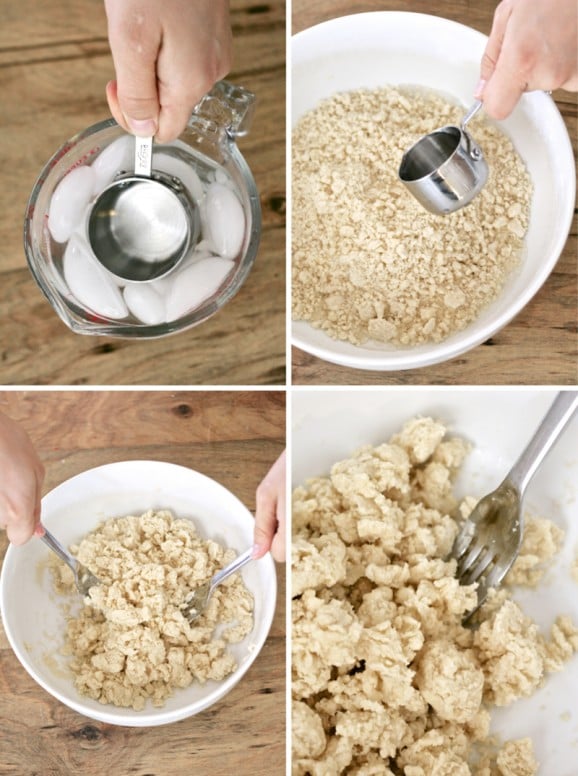 No. 4 Don’t over mix. If you mix too much your crust will lose it’s flakiness and become tough. Use this method for adding your water: measure out the ice water then pour in a swirl pattern over your crust mixture. Let the water soak for about a minute without touching it AT ALL! The water will soak in quite a bit and then you can use two forks to gently toss the mixture looking for any pockets of water. That’s it. That is all the mixing it needs. Your dough should look lumpy as shown in the photo above. Also what I wasn’t able to show in the photos is that your dough might have a sort of marbled appearance — don’t be alarmed that is a very good sign that you’ve done things right!

Okay so those are the four rules for making the dough. Now before we talk about how to roll it out and make a crust, let me just give one last tip: 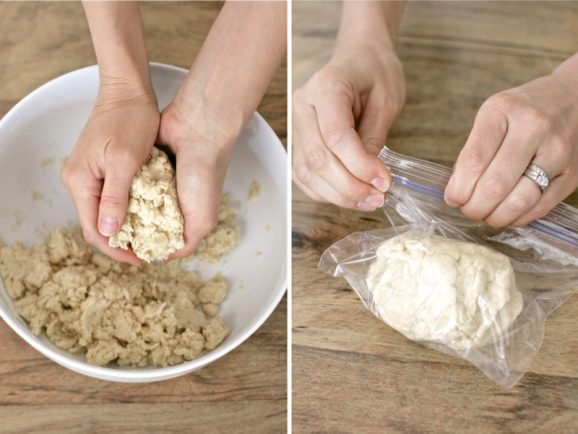 HOW TO FREEZE HOMEMADE PIE CRUST
Making pie dough takes some time, and as we are all very much aware pie crust freezes well. (I mean we’ve been buying frozen crusts, right?) With the holiday season approaching, save some time by doubling or quadrupling the crust recipe. Place dough in tennis-ball sized chunks and freeze inside a plastic, zip-top bag. Now you’ll have crust ready to go when you need it. To thaw, let the crust set on your counter for 2-4 hours. Turn it over and smash it periodically to speed the defrosting. In a pinch a warm water bath can help speed defrosting but do NOT use the microwave.

ROLLING OUT A PIE CRUST
Grab a rolling pin and begin by flouring your work surface. Next pick up a tennis-ball size chunk of dough. If your recipe is for a double-crust (as is the recipe below) you can simply divide the dough in half. 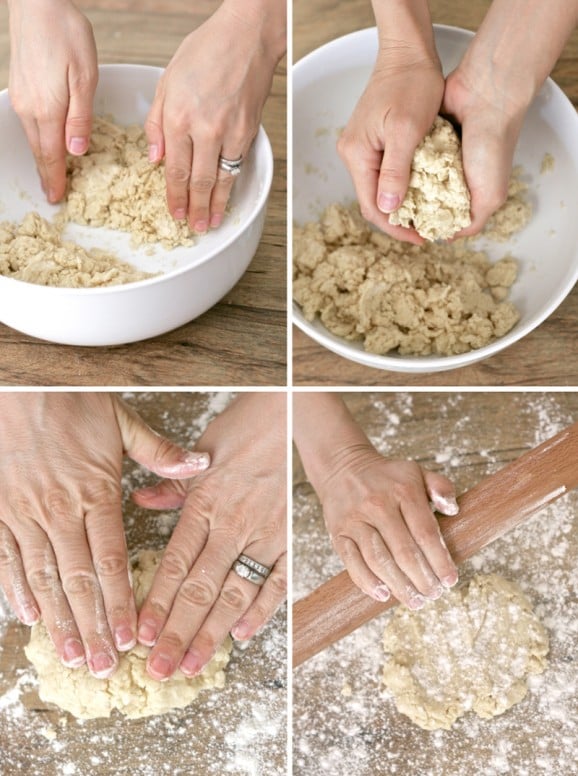 Quickly work your dough into a ball (don’t get carried away… we know it’s hard to resist the urge to knead the dough, but that counts as mixing and violates Rule No. 4). Smash the dough onto the floured surface and flatten. Rub flour on your rolling pin then roll the dough first one direction then perpendicularly the other direction. 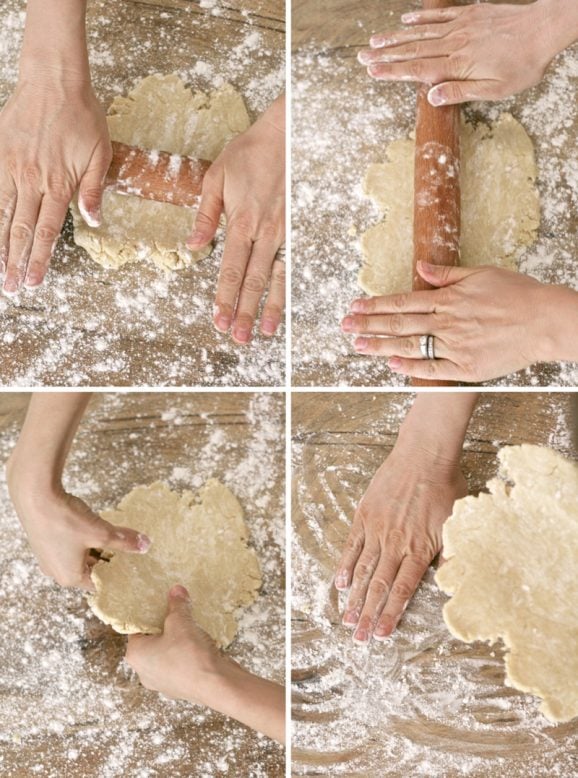 Now stop rolling and turn the dough over, spread the flour around your work surface again then place the dough back down. Flour the top of the dough again and press the sides to keep a circular shape. 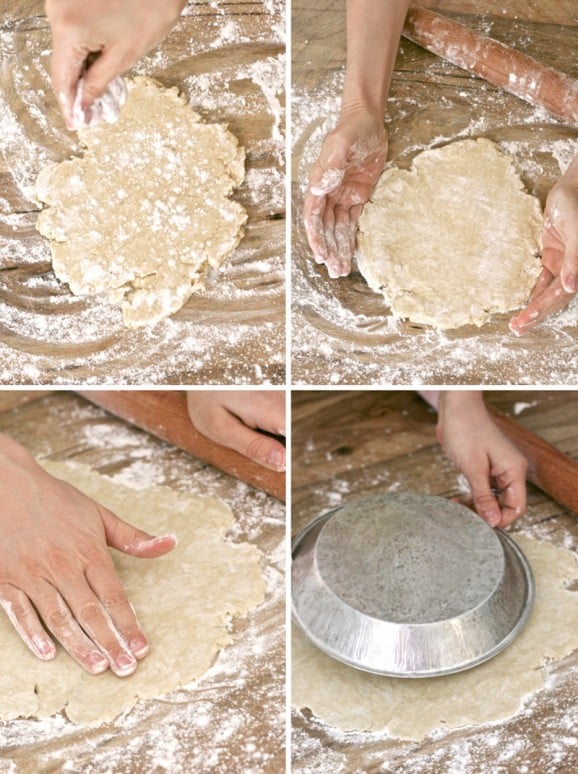 Continue rolling the dough out. I want to briefly mention that there is a difference between the sort of gentle rolling needed for pie crust and the more vigorous, back-and-forth rolling used when working with a yeast dough that you’re trying to stretch (like for cinnamon rolls). For pie crust you roll in just one direction always trying to maintain a circular shape. Stop regularly to check for a thick part and then roll over that thick part in the direction you want the dough to move to maintain a rounded shape. I feel like this concept is difficult to explain so I hope that makes sense. You will know you’re done rolling when the crust is large enough for the desired pan — hold the inverted pan centered over the crust and make sure there is about 1-2 inches all the way around the pan.

HOW TO TRANSFER ROLLED CRUST TO A PIE PLATE
Okay so I think this is the part that used to intimidate me the most, but now it’s my favorite part because I get the rush of a SUPERMOM MOMENT every time I do it! 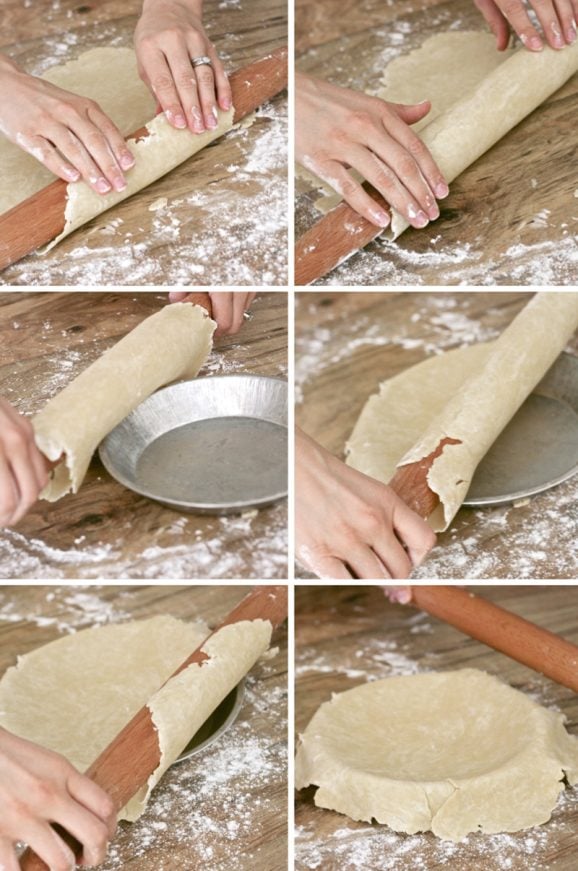 Place a well-floured rolling pin at the edge of your crust and lift the edge of the dough up onto your rolling pin. Now continue loosely rolling the crust up onto your rolling pin — we want it to stay put but we’re not trying to press the dough onto itself so just roll lightly. Once it’s rolled up move over the top of the pie plate, let the end of the crust hang over about an inch off the pie plate then begin unrolling the crust as you move over your pie plate. YAY!! YOU DID IT! 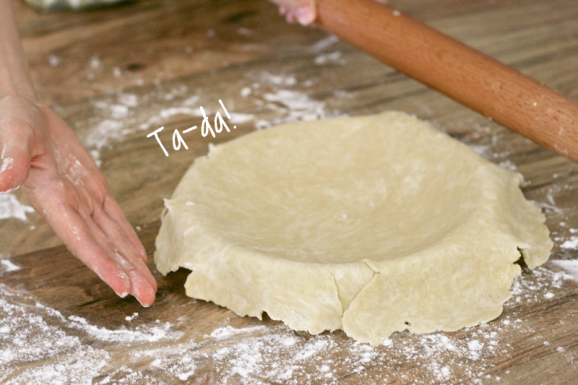 I bet you’re feeling pretty darn SUPER and smiling big just like Aimée was… you seriously can’t do this without grinning and feeling like a total Supermom! It’s a guaranteed #SupermomMoment, and YES! you should totally share a picture of it on Instagram! 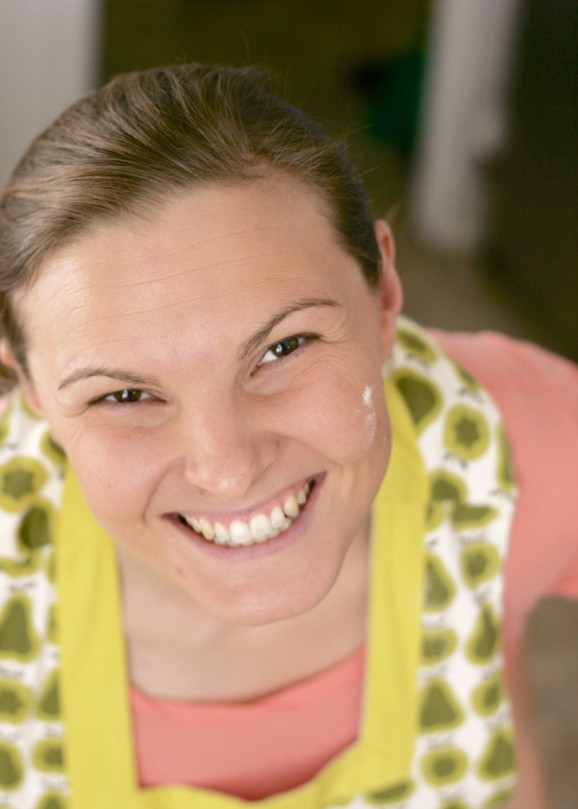 After you’ve savored that moment get back to finishing things up. First thing, go around and gently help your crust settle into the pan. Next trim off the excess dough — you only need about an inch of overhang all the way around. If your crust has any oops spots where you don’t have overhang or what not, don’t stress… you’re still Super! Just take some of the excess dough and place it behind the hole and press together. No one will ever know. 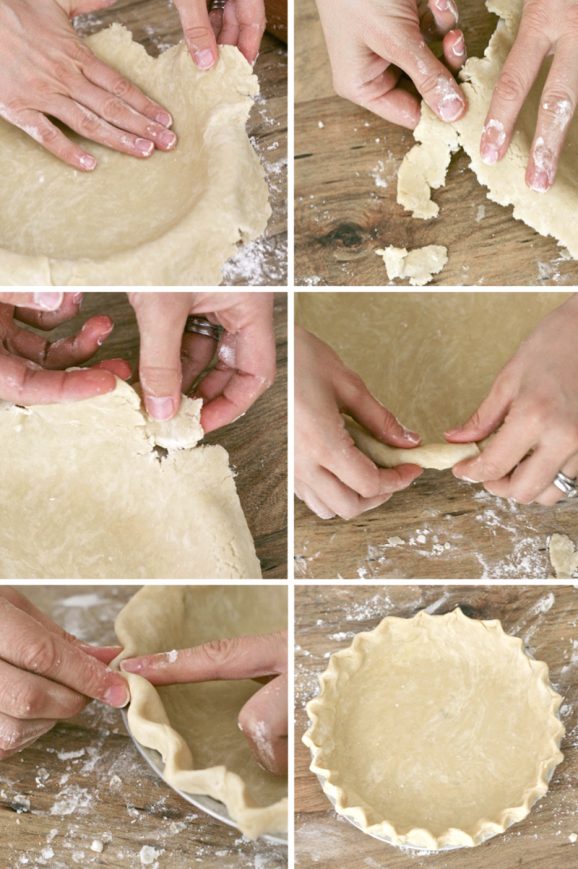 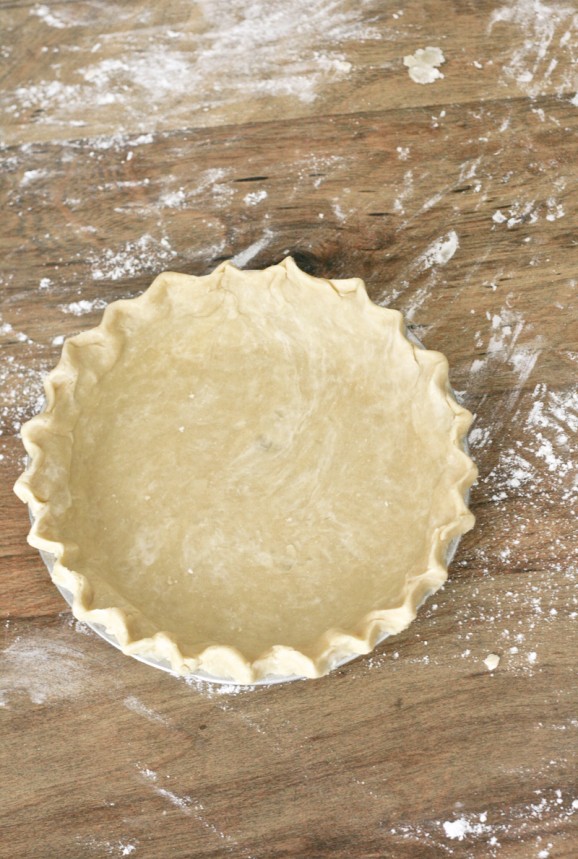 I bet you thought I was going to forget, but here finally is the recipe:

*After you’ve mixed in and let the 2/3 cup ice water soak, you might feel that your dough is still too dry. In this case add a bit more a tablespoon at a time, then proceed to the fork tossing.

Most pie recipes contain directions for how to cook the crust and it’s best to follow those. Click the photo below for our heavenly Caramel Pecan Pie recipe! 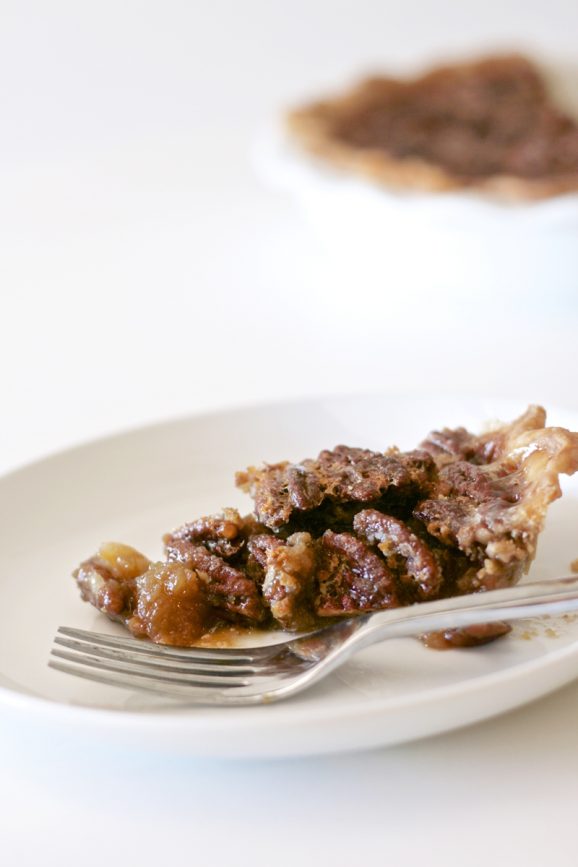 When you do try your hand at making pie crust be sure to share a photo with us on Instagram @PagingSupermom, and be sure to #PieKick and #SupermomMoment if you like.

Secrets to Making Pie Crust Like Your Grandma Did Supermom Moment: Back to School Breakfast Bettijo is the founder and designer of Paging Supermom where she shares what she's dreamed up for family fun. Known for practical and kid-friendly activities, free printables and simple ideas for holidays. She is a single mom of three girls and one boy. Bettijo was a guest on the Martha Stewart Show and has frequently appeared on local television. Her work has also been featured in national magazines including Real Simple, O, Redbook, Parents, Family Circle, and Health. During quieter moments, she enjoys art, retro-modern design, photography and making new things. Bettijo lives with her four kiddos in Phoenix, Arizona.
Author Bio Box by HOI
Author:
Bettijo
Categories:
Mentions:
kitchen, pie, supermom secrets, training
Keywords:
Not Specified
Last Updated:
June 26, 2021

5 thoughts on “How to Make Pie Crust – 100% Guaranteed Supermom Moment!”