We were asked by Mom It Forward to try out the new Toca Kitchen 2 app. My older girls love to do anything kitchen related (YES! Even the dishes… for now.) They also love Master Chef Junior, so I figured this app sounded right up their alley. 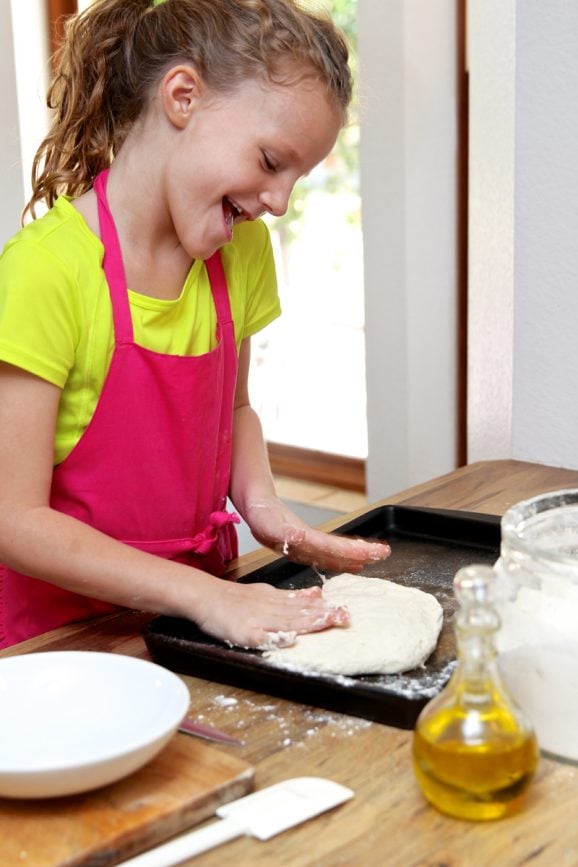 When I first downloaded Toca Kitchen 2, I fiddled around for a few minutes, but wasn’t quite sure how to work things. Then the next morning, I showed it to my kids, and they were quickly hooked. Since there are no in-app purchases or third-party advertising to worry about, I can let the kids be free to play. Pretty soon they were teaching me all sorts of tricks, and their favorite part was seeing how the characters reacted when they fed them their creations. 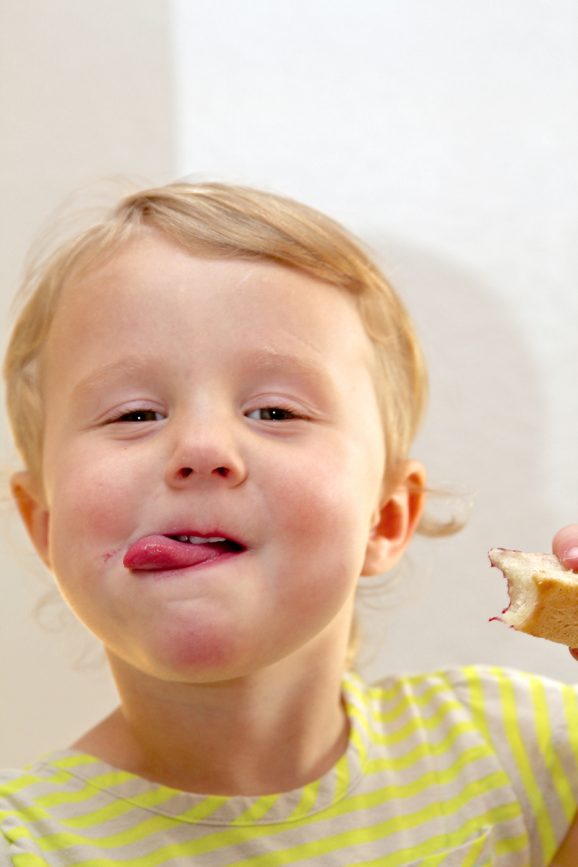 In Toca Kitchen 2 the kids are the chefs, and they can cook whatever they want. To begin, you select a character to feed, and then head into the kitchen where there is a refrigerator stocked with ingredients. After grabbing food, it’s time to prepare it using any of the five kitchen tools: knife, frying pan, boiling pot, juicer (shown below), and oven. There are condiments and seasonings to add, then it’s time to feed the characters. This is my kid’s favorite part — they love to see the way their character reacts. I had to chuckle to myself the first time one of the characters turned up his nose at a meal that had taken “so long” to prepare. The best reaction is a sort of satisfying yum sound followed by the character licking his or her lips. 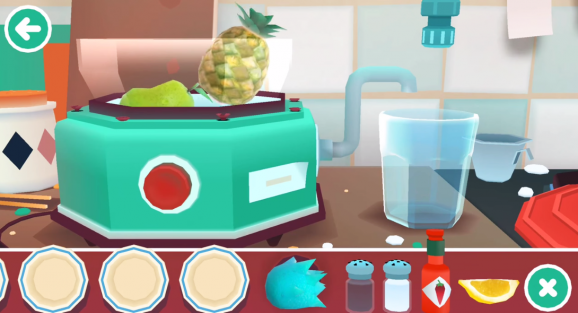 Actually it’s kind of funny because the kids have now taken to licking their lips when they like something we’re eating. It’s interesting to see them mimicking the app in real life, and I was surprised to see my daughter creating this chart — a cheat sheet of which foods each character likes. 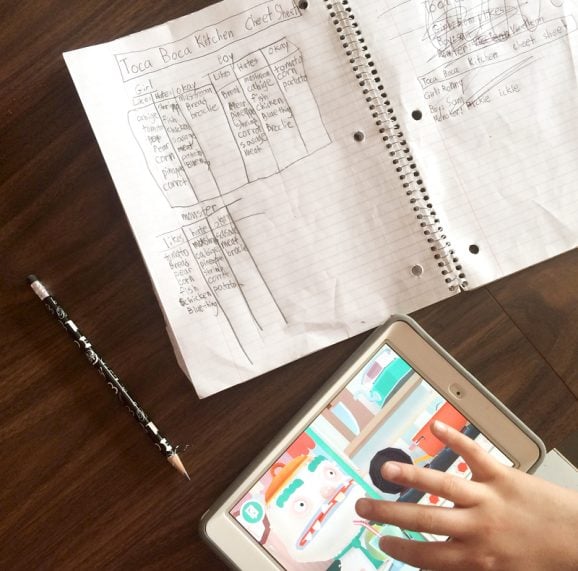 I figured creating a real-world Toca Kitchen recipe was in order. We had chili for dinner last night, and I often make focaccia to go with it. This time I decided to let the girls make it themselves. I adore this versatile and super-easy dough and usually have a bucket of it in our fridge. So they put on their aprons, and I put them in charge. I stood back with my camera and watched what happened. 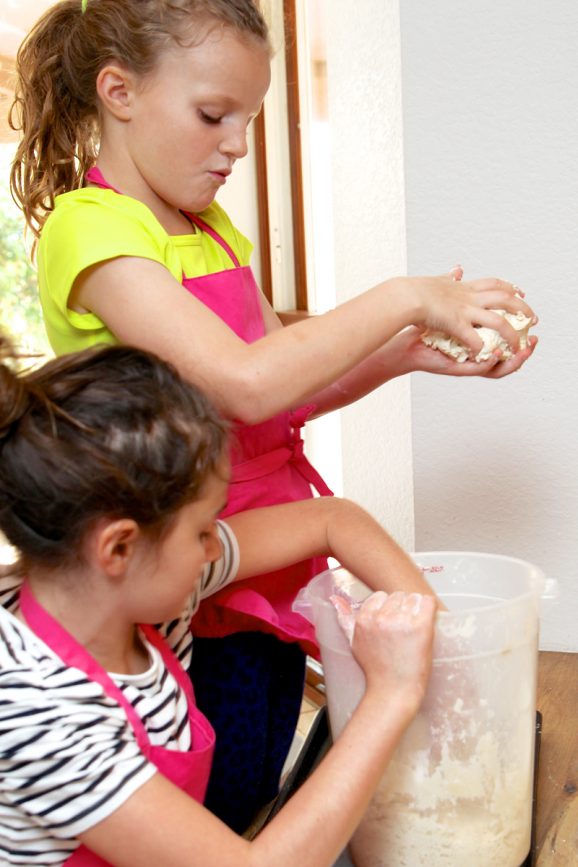 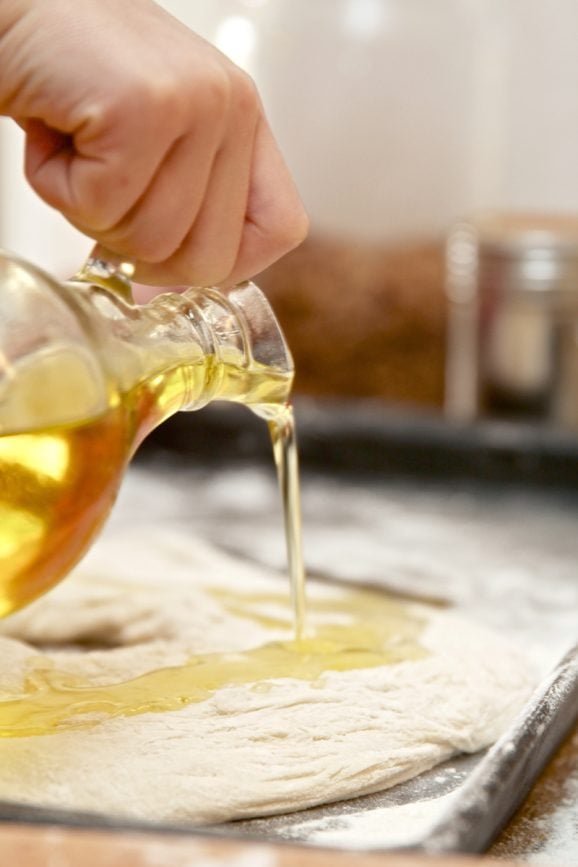 The focaccia recipe calls for rubbing the dough down with olive oil before adding toppings. Attalie grabbed from the fridge a bell pepper, carrots, garlic and parmesan cheese to add to her focaccia. I loved watching her cautiously cut the toppings — I could tell she was really concentrating. 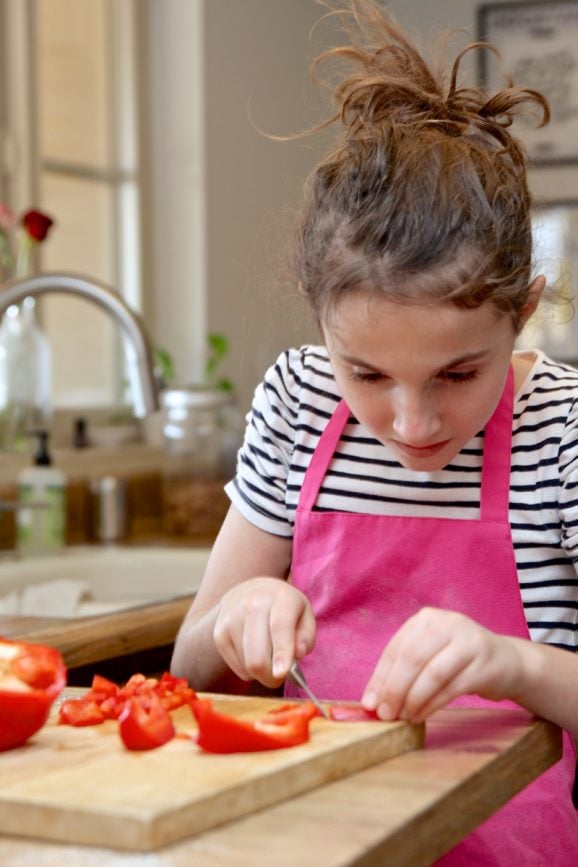 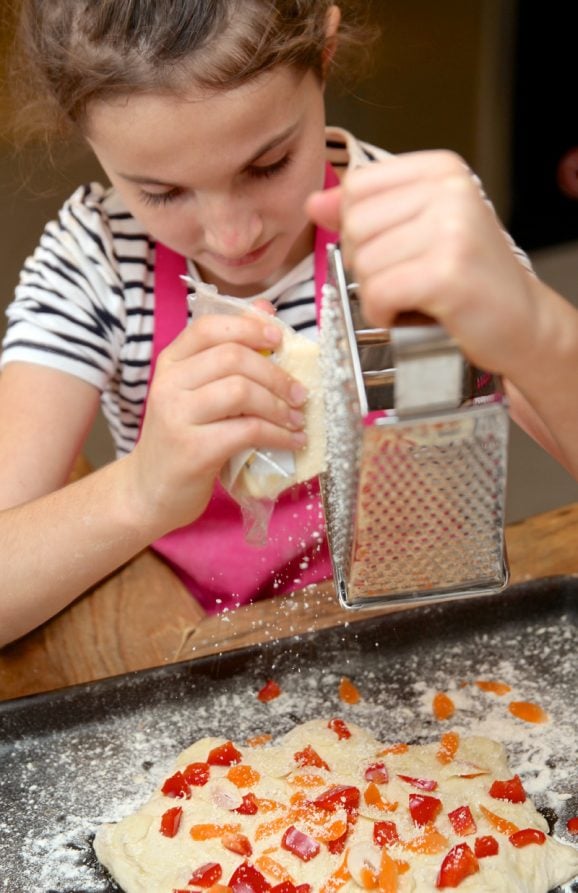 Attalie’s focaccia was looking pretty yummy at this point, and Piper had worked her dough into a festive wreath shape so she was ready to take her turn at the fridge. Just like they do in Toca Kitchen 2, I told the kids they could grab whatever they wanted out of the fridge. I had to raise my eyebrows at Piper’s choice of blackberries — I’ve never had a sweet focaccia, but she’s the boss. 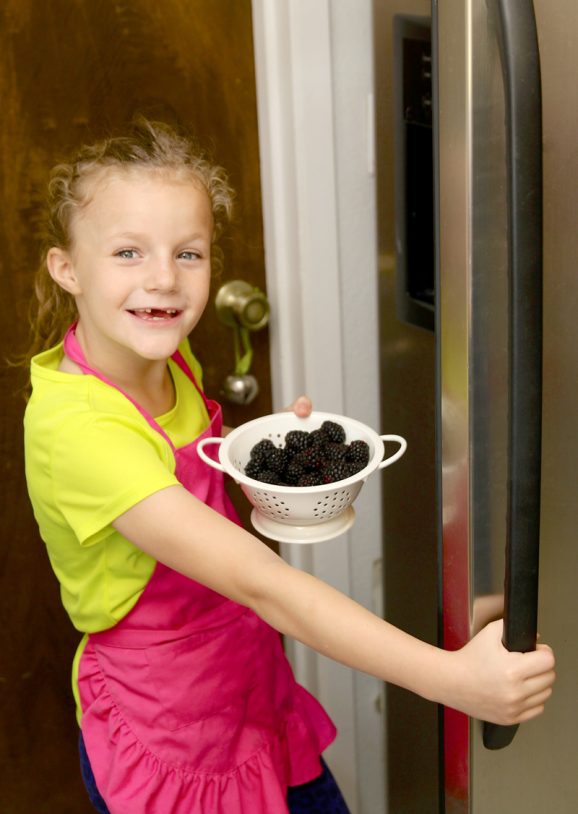 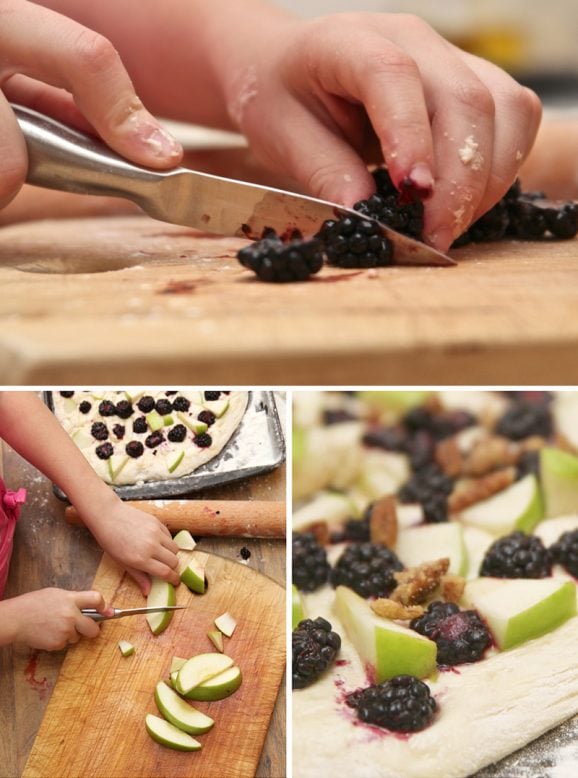 She also grabbed a green apple and asked for the candied pecans and cinnamon sugar from the pantry. It was creative combination, but it started looking pretty good. 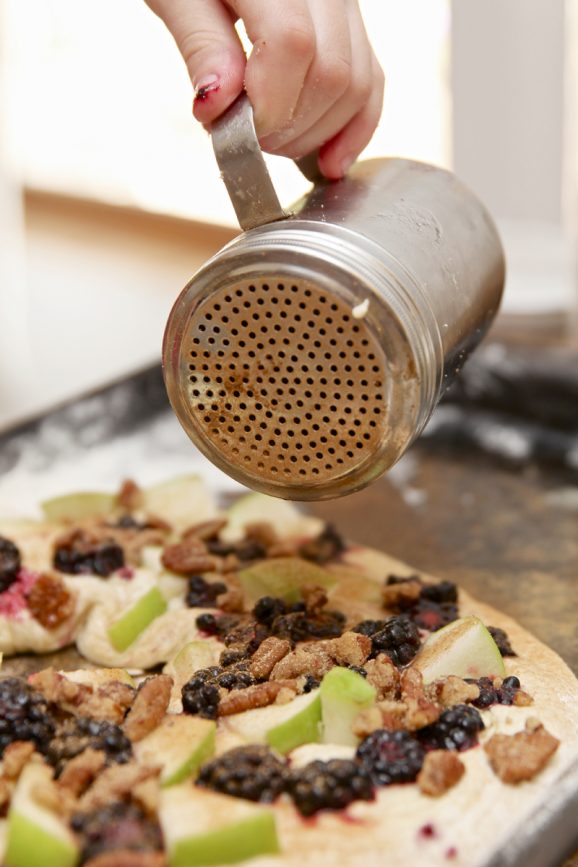 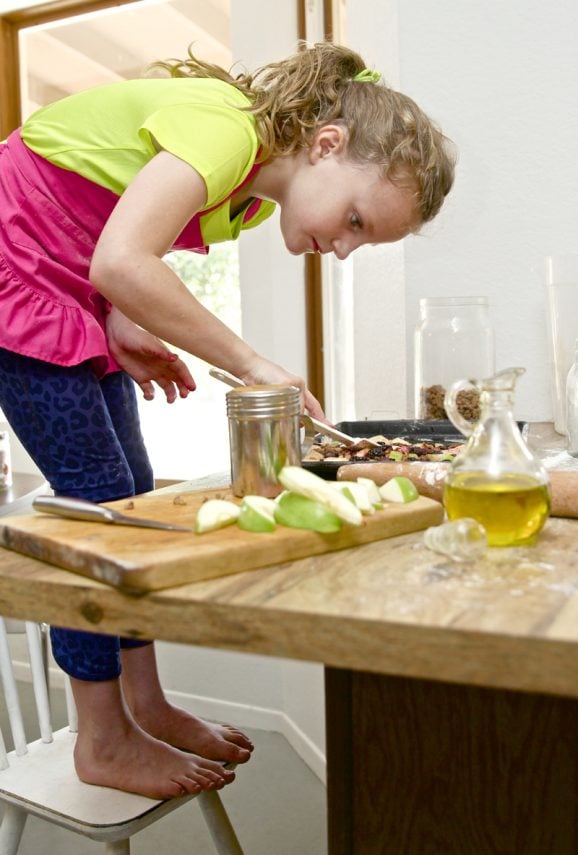 Fresh from the oven both of the focaccia’s were looking pretty fine, and I must admit I was pretty excited to taste them. 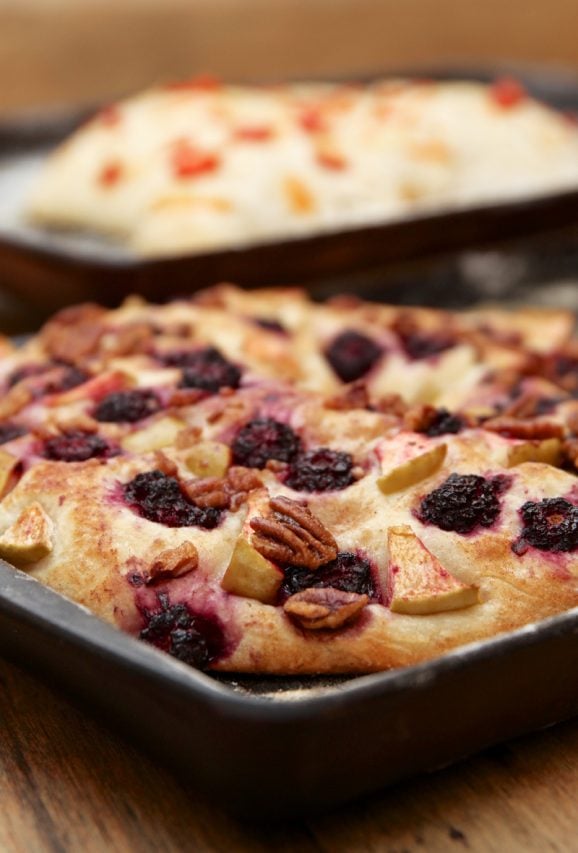 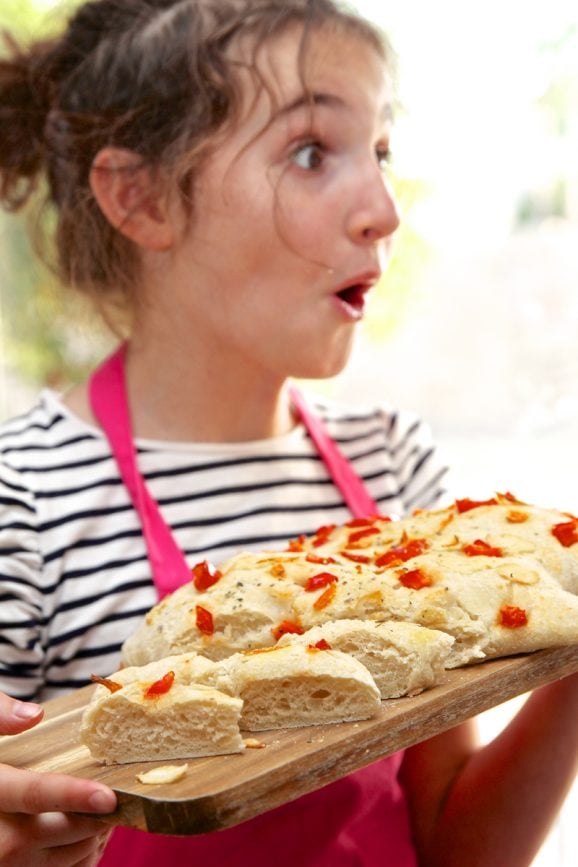 Hard to believe these were made by kids, right? 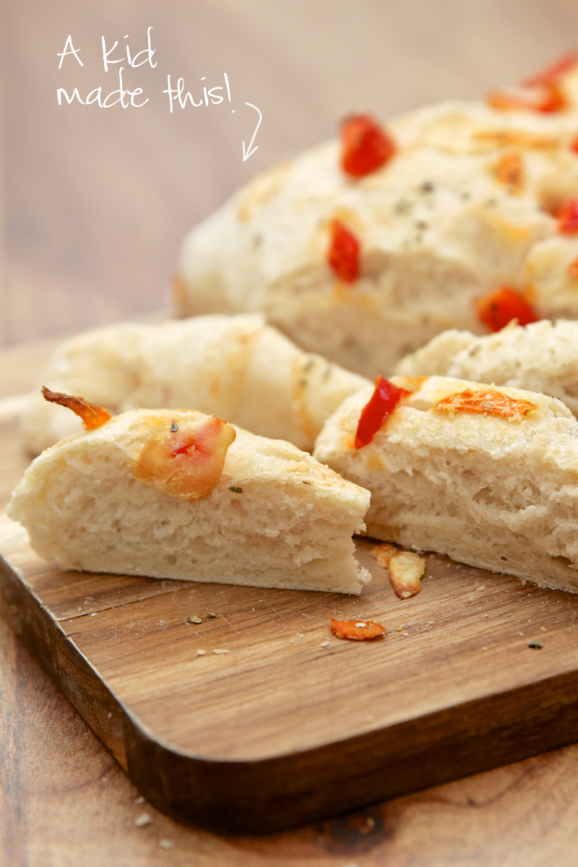 Now for the best part… trying them out! We let little sister Modette play taste tester. She coughed and frowned after eating a slice of Attalie’s bread — must have been the red bell pepper or garlic. Watch to see what she thought of Piper’s creative recipe:

Cooking in the kitchen for real is clearly a lot of fun, but for mess-free playtimes be sure to download Toca Kitchen 2, available for just 99 cents in the App Store (for iPhone, iPad and iPod touch). 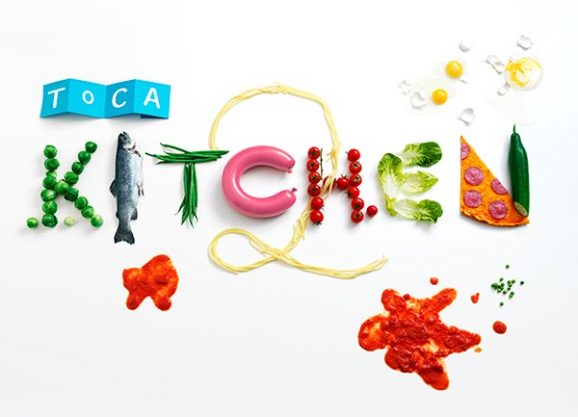 Here are the recipes:

TO MAKE: With floured-hands grab a grapefruit-size portion of dough and flatten onto a baking pan. Pour oil over dough and spread ll over. Press toppings into bread. Bake at 350 degrees for 30 minutes.

This post is sponsored by Toca Boca, but all opinions, ideas and messes are our own.

What’s Cooking in your kitchen

What’s Cooking in your kitchen COOKING WITH MY KIDS

What’s Cooking in your kitchen (week 2) Super-tips for Cooking With Kids I’ll Get You My Pretty!

Bettijo is the founder and designer of Paging Supermom where she shares what she's dreamed up for family fun. Known for practical and kid-friendly activities, free printables and simple ideas for holidays. She is a single mom of three girls and one boy. Bettijo was a guest on the Martha Stewart Show and has frequently appeared on local television. Her work has also been featured in national magazines including Real Simple, O, Redbook, Parents, Family Circle, and Health. During quieter moments, she enjoys art, retro-modern design, photography and making new things. Bettijo lives with her four kiddos in Phoenix, Arizona.
Power Bio Box by Zyra App
You are here: Home recipes Kids Get Cooking with Toca Kitchen 2
Title:
Kids Get Cooking with Toca Kitchen 2
Authors:
Categories:
Mentions:
kids crafts, kitchen, superkids
Keywords:
Not Specified
Last Updated:
June 26, 2021