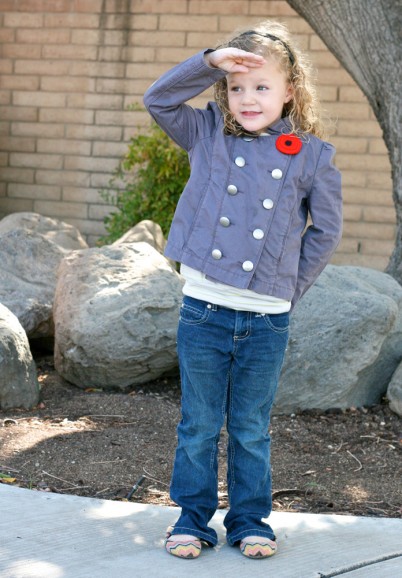 We had some house guests this past week — Superdad’s sister and brother-in-law were visiting from Calgary. In true Canadian spirit, we attended a professional hockey game with them. (Yes, as surprising as it may seem Phoenix DOES have an NHL team.) I noticed that the coaching staff for both teams were wearing these lovely red poppies on their jackets. My relatives explained that it is tradition in Canada for everyone to wear the flowers for Remembrance Day — the Canadian version of our Veterans Day. 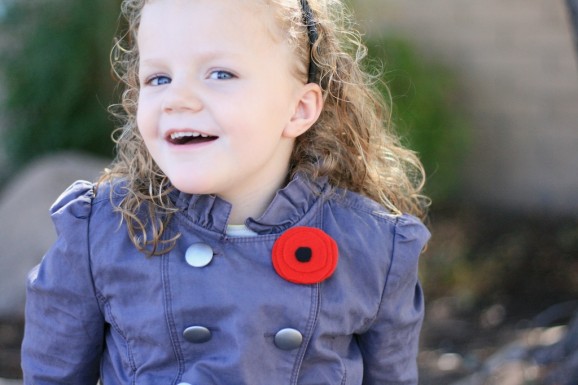 Since 1922 disabled veterans in Canada have made and sold red plastic poppies to wear on lapels for Remembrance Day. According to the Royal Canadian Legion the poppy flower was chosen based on the popular poem “In Flanders Field” written by Canadian Lieutenant-Colonel John McCrae.

In Flanders fields the poppies blow
Between the crosses, row on row,
That mark our place; and in the sky
The larks, still bravely singing, fly
Scarce heard amid the guns below.

We are the Dead. Short days ago
We lived, felt dawn, saw sunset glow,
Loved and were loved, and now we lie
In Flanders fields.

Take up our quarrel with the foe:
To you from failing hands we throw
The torch; be yours to hold it high.
If ye break faith with us who die
We shall not sleep, though poppies grow
In Flanders fields.

It seemed like a perfectly lovely tradition, but since no one is selling poppy pins here in Arizona, I decided to design simple no-sew felt poppies that my girls could help me make. 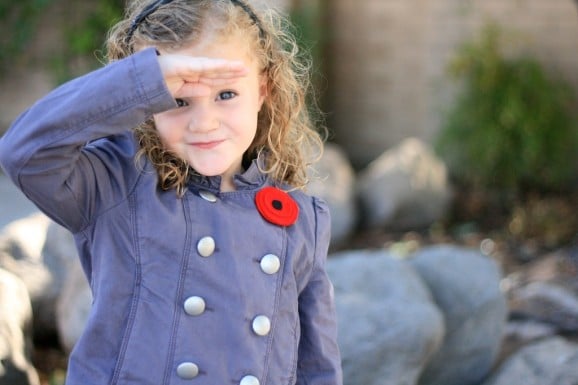 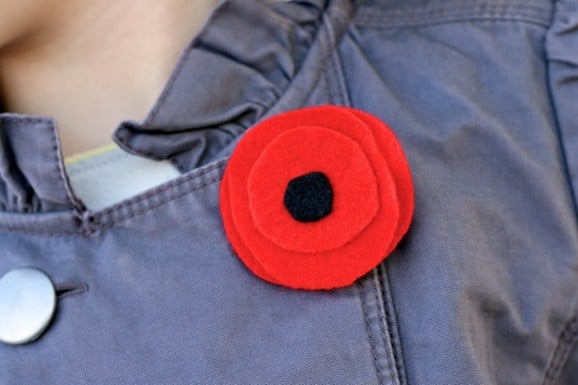 Here’s what you need to make your own Felt Poppy Lapel Pins (you might just have everything you need in the cupboard — I did!)

INSTRUCTIONS:
First cut three red circles out of felt. Make the first approximately 2 inches (that’s 50mm for our Canadian friends), then make the second and third slightly smaller. Don’t worry about getting them exact or perfectly round. The beauty of this project is that free-handing the cuts makes them look even more poppy-ish.

Next cut a half-inch (12mm) black circle to create the center.

Now glue all your red circles together, beginning with the largest on bottom. Finish your poppy by gluing the black circle in the center top.

Glue the completed flower to a pin or clip and wear for Veterans Day!