We were asked to test out the new Tulip For Your Home collection, and we decided to use the new stencils and paint to create a Craft Room Command Center. 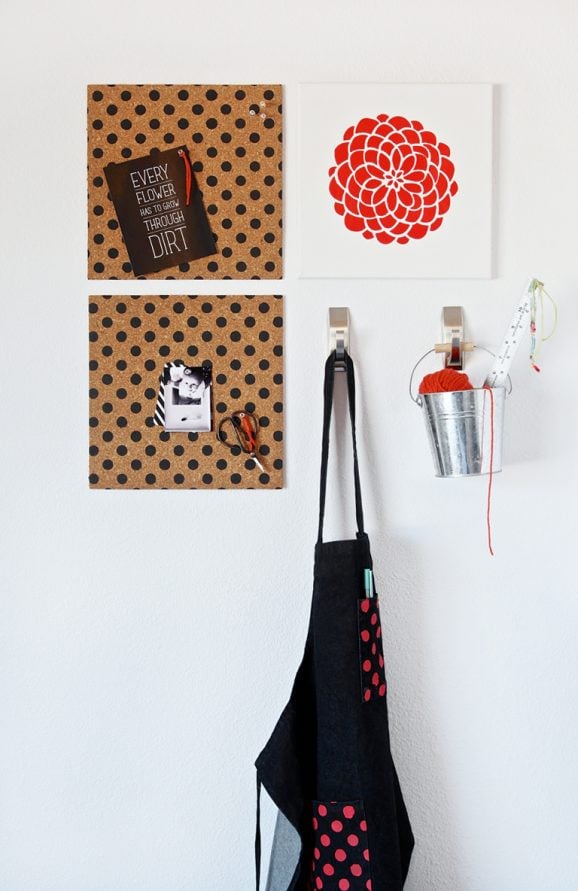 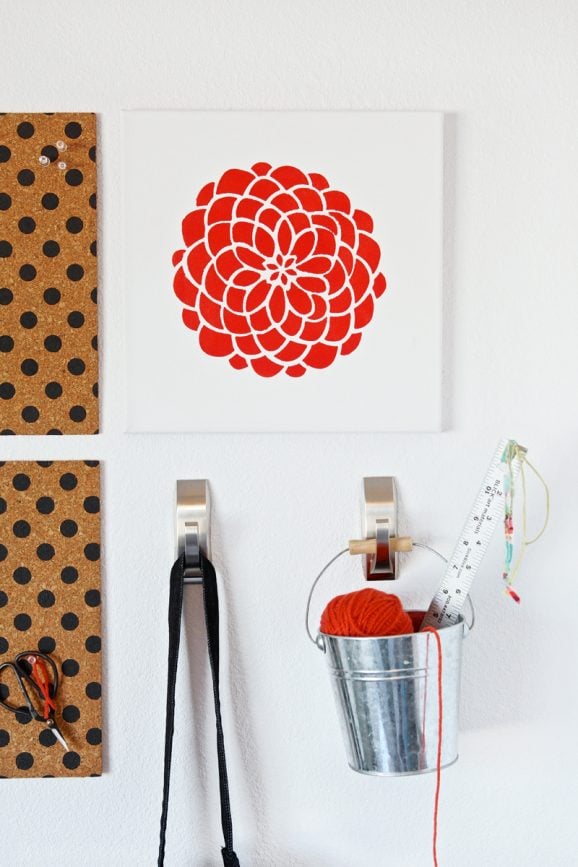 We were particularly excited to try the Tulip Stencil Spray Adhesive. You spray it on the back of the stencils to help seal out paint drips. The new Tulip Soft Paints are specifically designed for fabric, but we decided to test them out on a variety of surfaces.

The CANVAS we painted (using the Dahlia Medium Textile Stencil), took less paint to achieve great coverage. We did have a couple spots where the paint bled under our stencil and we wondered if it was because the wrapped canvas tended to stretch a bit as we were rolling on the paint. Also we noticed that in a few parts the adhesive stuck to our canvas when we peeled the stencil off. The package directions suggested using baby oil to remove the adhesive, but this created shiny blotches on our canvas so I ended up needing to oil the entire canvas so it would look even — next time I think we’ll just use masking tape to remove it (more on this below.) 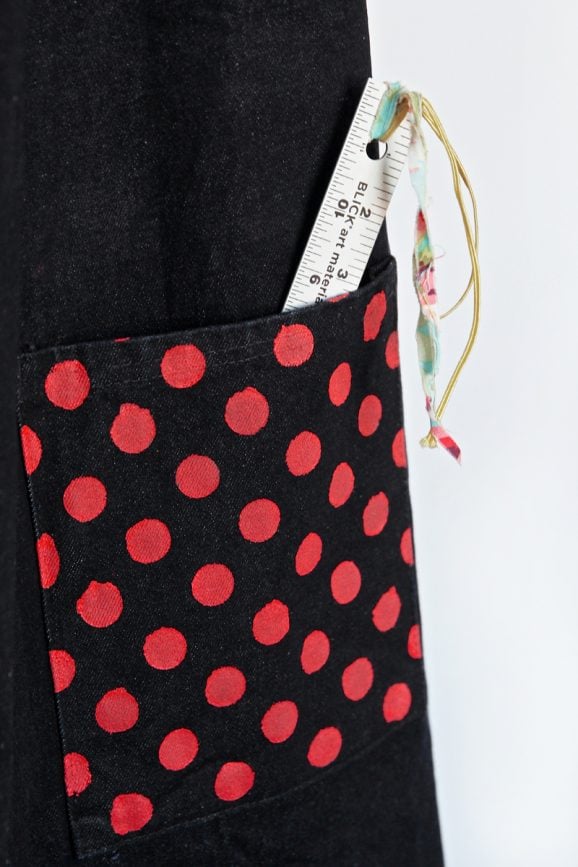 The DENIM proved most difficult to stencil. We just added polka dots to the apron pockets, and it turned out really cute, but we did experience quite a bit of bleeding. We didn’t think ahead about how lumpy it would be, especially with such a stiff fabric, around the pocket seams, which created a really uneven paint surface. 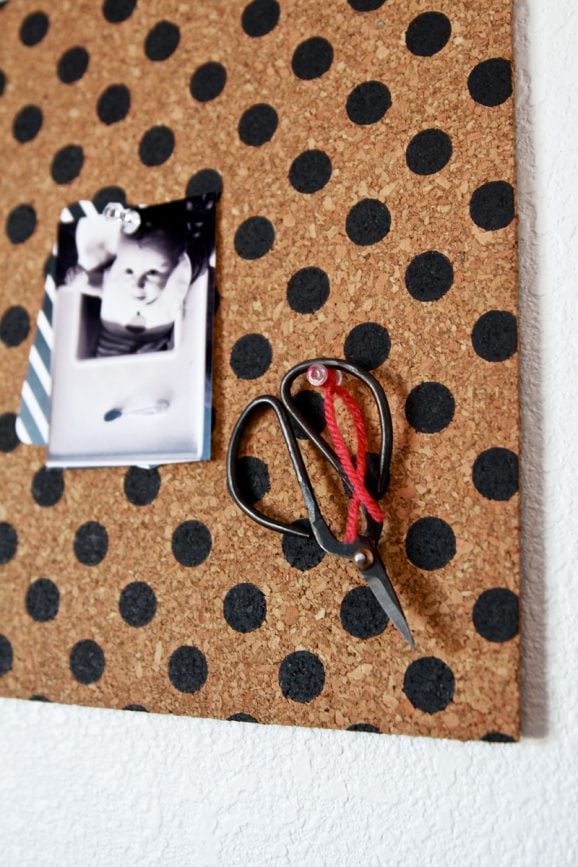 The CORK was the easiest to work with since it provided a fairly hard and even surface and we saw very minimal paint bleeding. 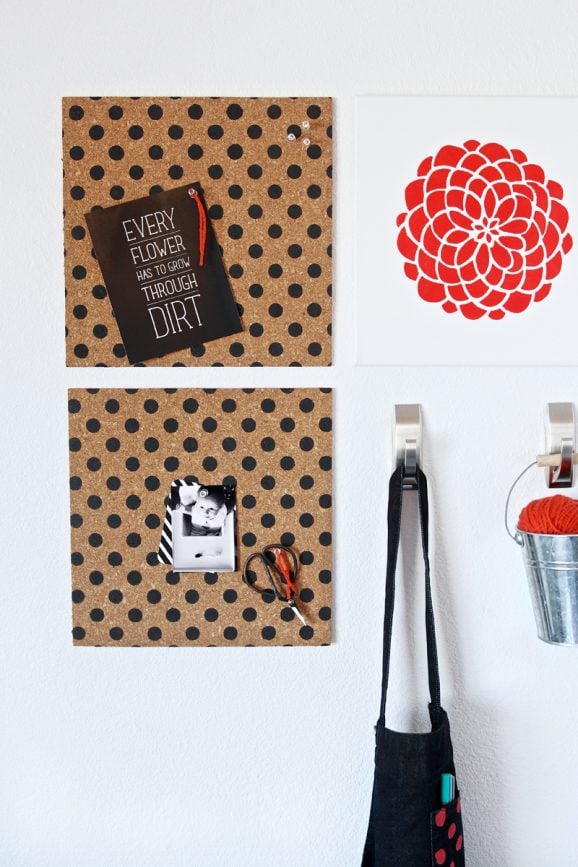 We found the Tulip For Your Home items at our local Hobby Lobby store. When I first spotted them at the store, I was super excited about how big the Large Textile Stencils are — a whopping 14×14 inches. This opens up a world of possibilities (we’re think throw pillows!), but this time we decided to create a DIY Polka Dot Bulletin Board. They had a bunch of fun patterns to choose from, and our favorites were this Polka Dots and the Wide Stripe one. Go here to see where to find the Tulip For Your Home collection near you. 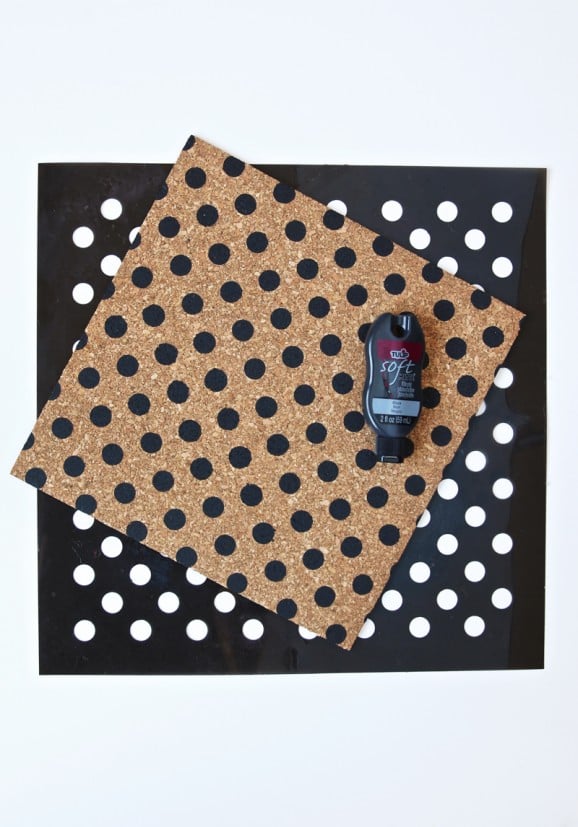 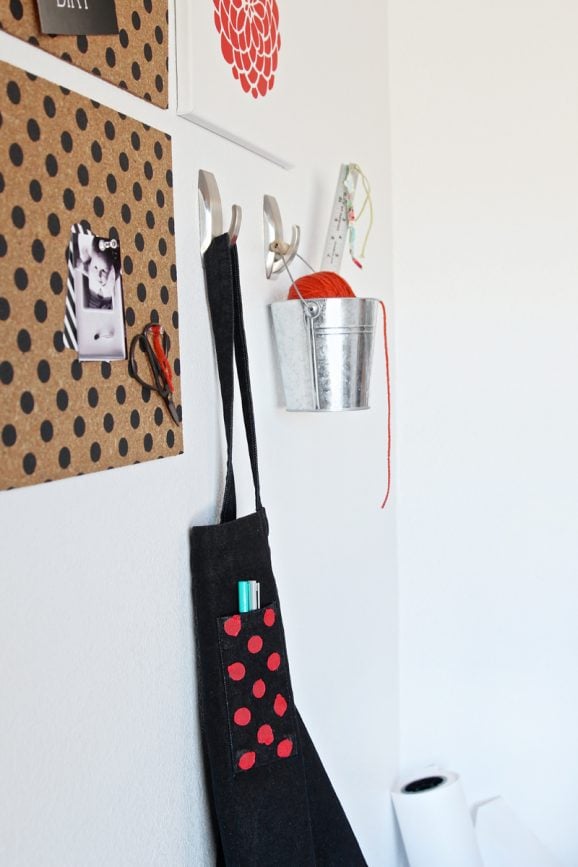 Here is a little tutorial so you could see the Tulip Stencil Adhesive Spray and the Large Textile Stencils in action. We decided to show how to make the Polka Dot Apron, since it was the most difficult. (But don’t worry it is still TOTALLY easy and doable!) The thing that makes this project a little tricky is that we only wanted to stencil right on our pockets. For the 12×12 canvas and cork boards we were just using the entire stencil, but for the apron we had to block the paint so just the pocket would be painted. 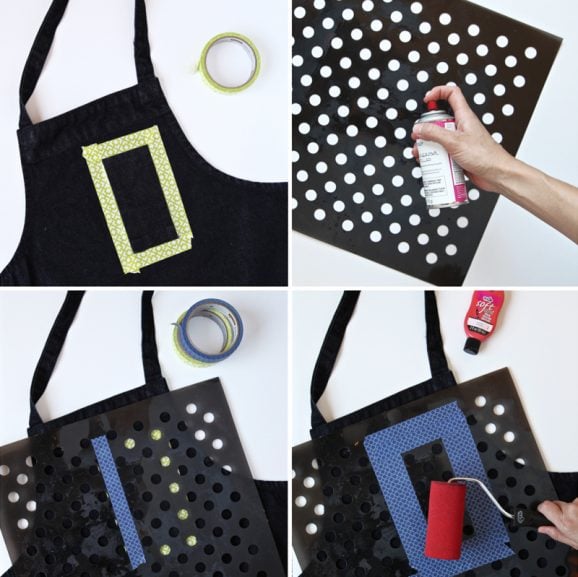 TO MAKE: Begin by taping off the pockets on your apron (we used this apron). Spray a light, even coating of the Stencil Adhesive on the back side of the stencil (NOT the shiny side). Position the stencil as desired, then press the sticky side down on the apron and gently rub all over the stencil so it will adhere well. Next tape off any of the holes that are near the edge of your painted area — this step helps give you more leeway when painting and prevent unwanted drips. Squeeze out about a quarter-size dollop of paint onto a plate or other flat surface. Run your Tulip Paint Roller through the paint over your stencil. We did about 3 coats of paint to cover the denim. We peel off the stencil right away, don’t wait for the paint to dry.

A word of caution about the Stencil Adhesive Spray — don’t use too much! After finishing the lower pocket, and seeing that the paint bled under more than we would have liked, I got a little overzealous and drenched the stencil with adhesive. I was thinking I hadn’t used enough adhesive before, but really the issue was the stiff seams around the pocket (as explained above). Anyway when we peeled of the stencil our hearts sank — the tacky adhesive stuck to our apron and looked like gray splotches all over. Seriously we thought it was ruined. 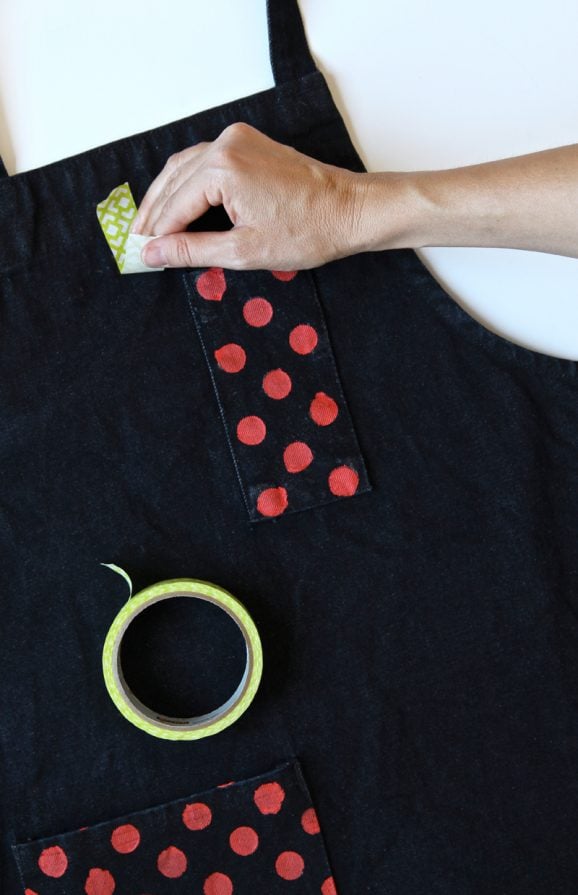 Luckily we figured out a solution! We tried using a craft knife to scrape the adhesive off, but what ended up working best was masking tape. We waited until the painted dots had dried, then stuck the masking tape on and pulled it back off quickly — like you would when waxing. Unlike with waxing eyebrows though, less rubbing was actually better — when we placed the tape on the surface evenly (with a light rub) we actually removed more adhesive then when we really rubbed the tape down, since the pressure actually pushed the adhesive deeper into the fabric. We “waxed” the apron for a bit and managed to remove nearly all the adhesive splotches. Yay!! Project saved, and next time I’ll be sure not to spray too much. 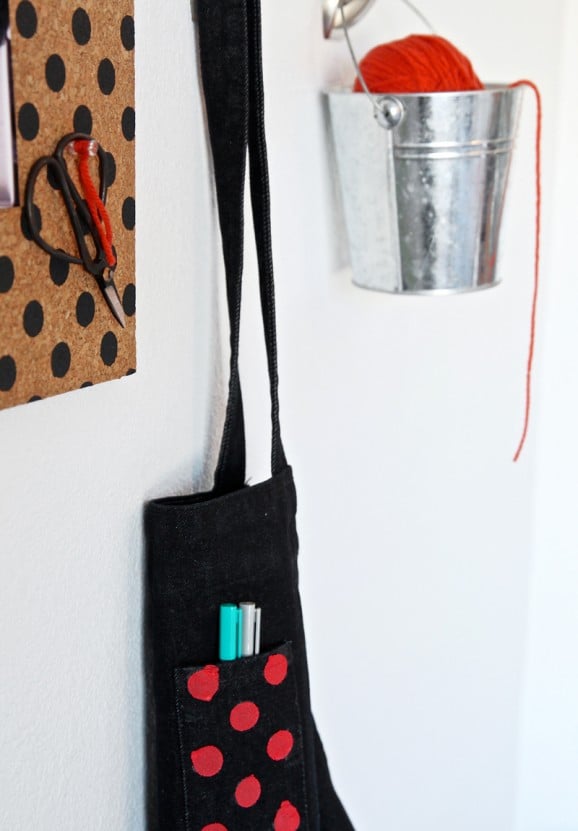 In case you missed it yesterday, be sure to check out this post where you can download the “Every Flower Has to Grow Through Dirt” free printable and learn how to make those fabulous Yarn-Covered Push Pins. 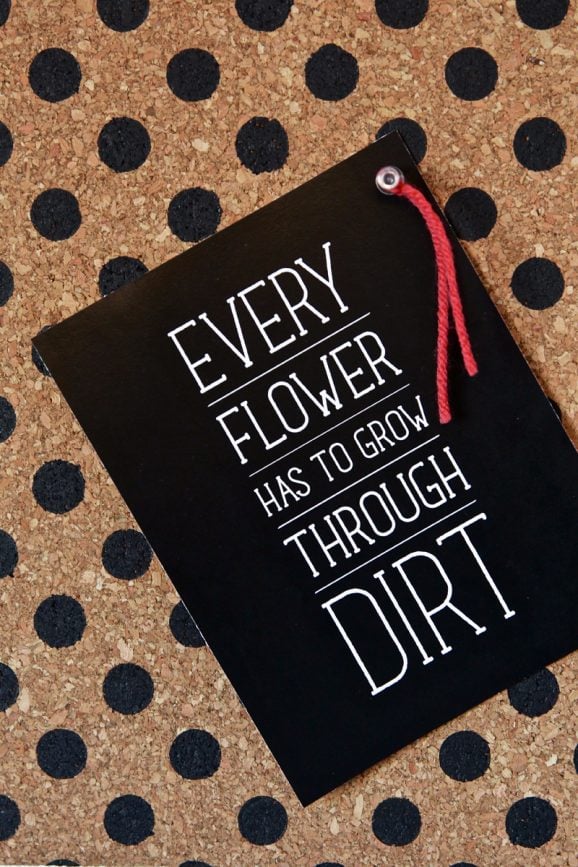 25 Command Centers to Organize Your Life A Peek into My Craft Room

Bettijo is the founder and designer of Paging Supermom where she shares what she's dreamed up for family fun. Known for practical and kid-friendly activities, free printables and simple ideas for holidays. She is a single mom of three girls and one boy. Bettijo was a guest on the Martha Stewart Show and has frequently appeared on local television. Her work has also been featured in national magazines including Real Simple, O, Redbook, Parents, Family Circle, and Health. During quieter moments, she enjoys art, retro-modern design, photography and making new things. Bettijo lives with her four kiddos in Phoenix, Arizona.
Power Bio Box by Zyra App
You are here: Home style Craft Room Command Center with Tulip
Title:
Craft Room Command Center with Tulip
Authors:
Categories:
Mentions:
crafts, home, spring
Keywords:
Not Specified
Last Updated:
June 26, 2021