We decided it was time for our two year old to kick her binky habit. She is big for her age, and it is getting to be embarrassing to go out in public with that thing hanging out of her mouth. Pacifiers are truly heaven sent when your infant is inconsolable and you have no idea what else to do, but it can be so hard to ween kids off. My older daughter just decided she didn’t want it anymore — I really was spoiled. It is much worse this time around. 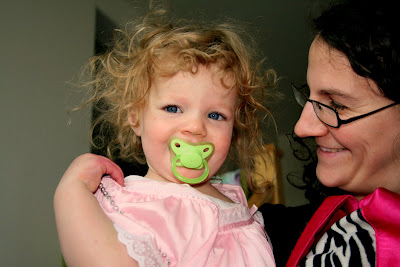 Yesterday afternoon when she asked for her pacifier, we told her she was too big for it and there was going to be no more binky. Things really hit the fan at bedtime, though, as we tried to tuck her in, she began bawling hysterically, and the crying continued for a full hour. She really was in agony — I swear it was like a drug addict going through withdrawals.

Of course I felt awful. Once we started and I saw how upset she was, I just wanted to give in. I had to keep reminding myself that we had to get rid of the pacifier eventually, and if I gave in now, we would just have to start all over again. Sure the crying would have stopped for tonight, but how much worse would it be next time?

I have heard of parents cutting off the tips of the pacifier and giving the child the “broken” binky. It really started to sound like a good idea as she showed no signs of calming down anytime soon. I am happy to report that it did work — kind of.

When we handed her the clipped pacifier, she hushed immediately. It was both heartbreaking and fascinating as she took it into her hands, and poked her little finger into the hole, trying to make sense of what had happened to her precious pacifier. I explained to her that it was all used up and she was a big girl and didn’t need it anymore. She eyed me warily, but didn’t start up the hysterics.

She tried to suck on it a few times but didn’t like how it felt. She insisted on holding it as she laid down for bed. I finally thought we were in the clear, but every few minutes she would whimper and start crying, still mourning her lost friend. We were up half the night and eventually had to let her sleep with us — which meant I had her heel crammed into my chest, and I nearly rolled off the bed.

The important thing is that we stuck with it, and hopefully tonight will be better.

Bettijo is the founder and designer of Paging Supermom where she shares what she's dreamed up for family fun. Known for practical and kid-friendly activities, free printables and simple ideas for holidays. She is a single mom of three girls and one boy. Bettijo was a guest on the Martha Stewart Show and has frequently appeared on local television. Her work has also been featured in national magazines including Real Simple, O, Redbook, Parents, Family Circle, and Health. During quieter moments, she enjoys art, retro-modern design, photography and making new things. Bettijo lives with her four kiddos in Phoenix, Arizona.
Author Bio Box by HOI
Author:
Bettijo
Categories:
Not Specified
Mentions:
babies, supermom secrets, training
Keywords:
Not Specified
Last Updated:
August 26, 2010

4 thoughts on “Will Not Be Pacified”