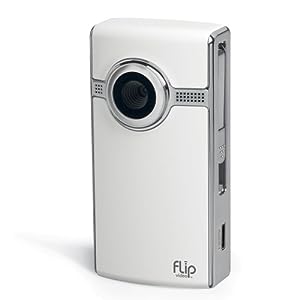 When I was just weeks away from giving birth to my first daughter, a close friend (who already had a child) asked me if I had a video camera. I didn’t, and I had never thought of it as the parenting necessity that it truly is.

Since then I have used several video cameras from the ancient camcorder dinosaur that used actual video tape and was way too complicated, to early digital contraptions with poor image quality and lighting. Then my first digital camera recorded video, only there was no sound — a major flaw when you are trying to capture those cute little coochie coos that your newborn is making.

Thankfully when I replaced my digital camera the newer models included sound with the video, and although I could only record a two-minute snippet, that seemed like more than enough. (I mean honestly, who wants to sit through hours of home videos anyway?)

I had finally reached my perfect home video place. Then I saw the Flip. This amazing hand-held video camera is the size of a two-year-outdated cell phone and can record up to 2 hours of video IN HIGH DEFINITION!

It is so easy to use that when my four year old was playing with it she accidentally turned it on and upon seeing the red “recording” light on the front thought something terrible was happening. She brought it over to me and tried to blame it on her sister. I believed her too, until I watched the very incriminating video she had unknowingly made, and so then we had a talk about lying.

But back to my point: the Flip recorder ($170 at Amazon.com) is so small and convenient that you can carry it in your purse to be quickly retrieved for capturing that first step, word, etc. It automatically adjusts for low light (I told you it was easy!), and the video quality is worthy of viewing on your big screen at home. Oh, and I recently discovered that it’s also a really great way to entertain kids on long road trips. Let them record and watch a video of themselves, then delete it later — that’s the beauty of digital. Bettijo is the founder and designer of Paging Supermom where she shares what she's dreamed up for family fun. Known for practical and kid-friendly activities, free printables and simple ideas for holidays. She is a single mom of three girls and one boy. Bettijo was a guest on the Martha Stewart Show and has frequently appeared on local television. Her work has also been featured in national magazines including Real Simple, O, Redbook, Parents, Family Circle, and Health. During quieter moments, she enjoys art, retro-modern design, photography and making new things. Bettijo lives with her four kiddos in Phoenix, Arizona.
Author Bio Box by HOI
Author:
Bettijo
Categories:
Not Specified
Mentions:
gear+gadgets, obsessions
Keywords:
Not Specified
Last Updated:
August 26, 2010