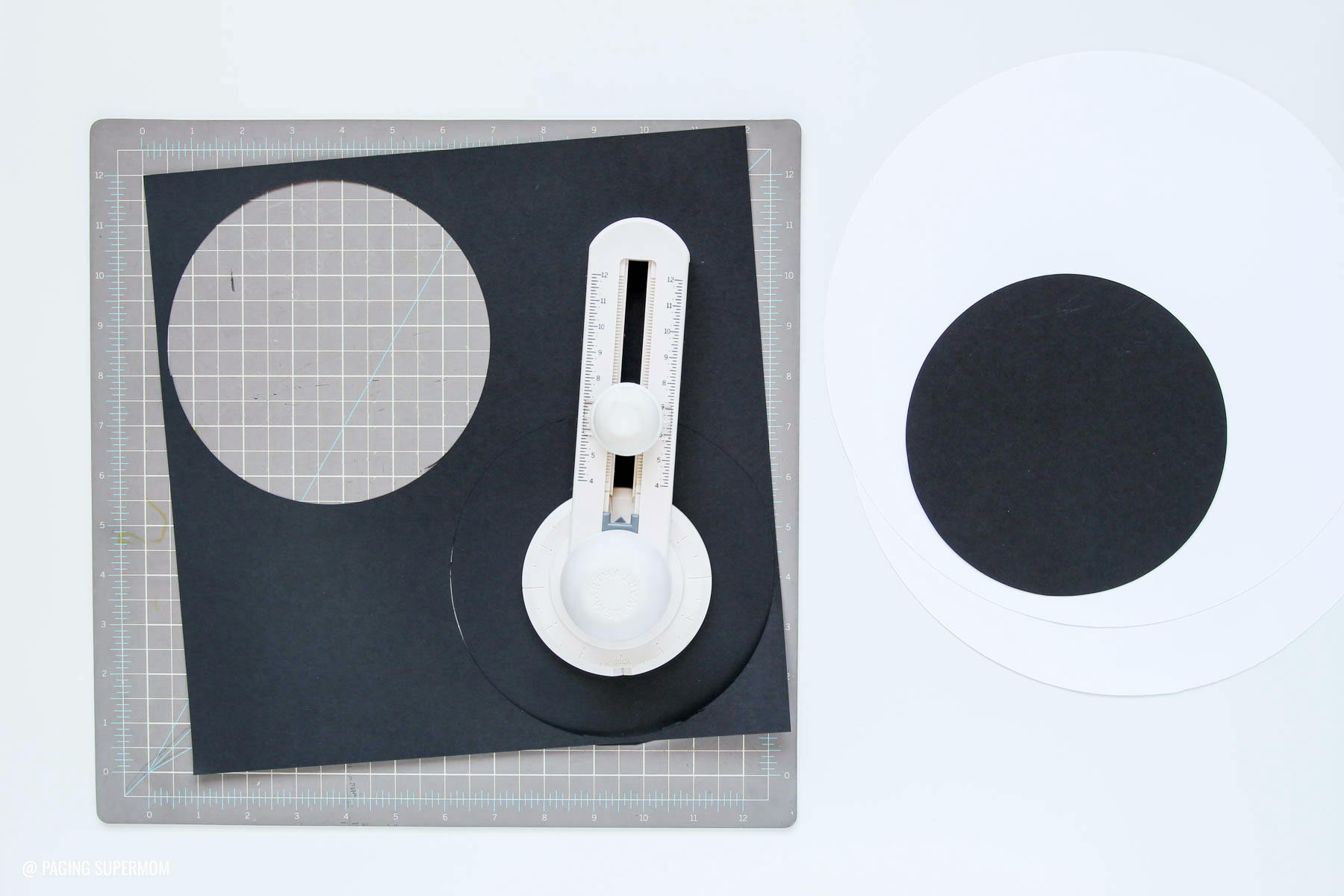 Delay filling your balloons with helium as long as possible. I purchased these 24-inch round balloons and was planning to fill them with helium at home because I didn’t think the store was going to be open when I needed to get the balloons done for my Moana Shiny Party. Turned out I was able to get mine done at Party City. They actually sell the 24-inch balloons in store, and I think it would probably be cheaper if can make it to the store. I wanted a deep purple, and their darkest purple balloons were a bit light, but we placed one of the blue balloons inside the purple one before filling, which produced a nice, dark purple color. The balloons were guaranteed to float for 12 hours, but we added High Float and mine lasted at least 2 days. I actually ended up buying three balloons instead of just two, in case we had any mishaps.

As the tether string for the balloons, I attached six strands of chunky Lion Brand Homespun Yarn, the Petunia Stripes color was variegated blue to purple just like Tomatoa. I wanted it pretty thick to look more like the eyes attached to the crab and weren’t just floating. I actually pulled out three double-lengths of the yarn, then folded the strands in half to tie onto the balloon. I attached them to balloon weights on the floor behind the table.

I used double-sided tape to attached the black circle to the white one. I had planned to use poster putty to fix the eyes to the balloons, but it wouldn’t hold. Due to the curved nature of the balloon, these big paper eyes won’t lay totally flat so they gape just a bit. It doesn’t look bad, but it does mean you need a pretty strong adhesive.

I used several pieces of the Scotch double-sided tape, which held, but it was more unforgiving. I really only had one shot to get the eye on straight because in peeling that double-sided tape off I risked popping the balloon.

It was a bit trickier than I expected to get the eyes placed level, I easily placed the first one, but then in trying to make the second one match, I had to finagle things a bit. When I attached the second paper eye, I realized the weight of the paper caused the balloon to rotate forward a bit so the eye ended up way too low. Afraid to pop it, I actually left that eye in place and just turned the balloon around and tried again. This time I aimed higher to compensate for the rotation. Then to get them to stay lined up, I also ended up taping the balloons to the wall. 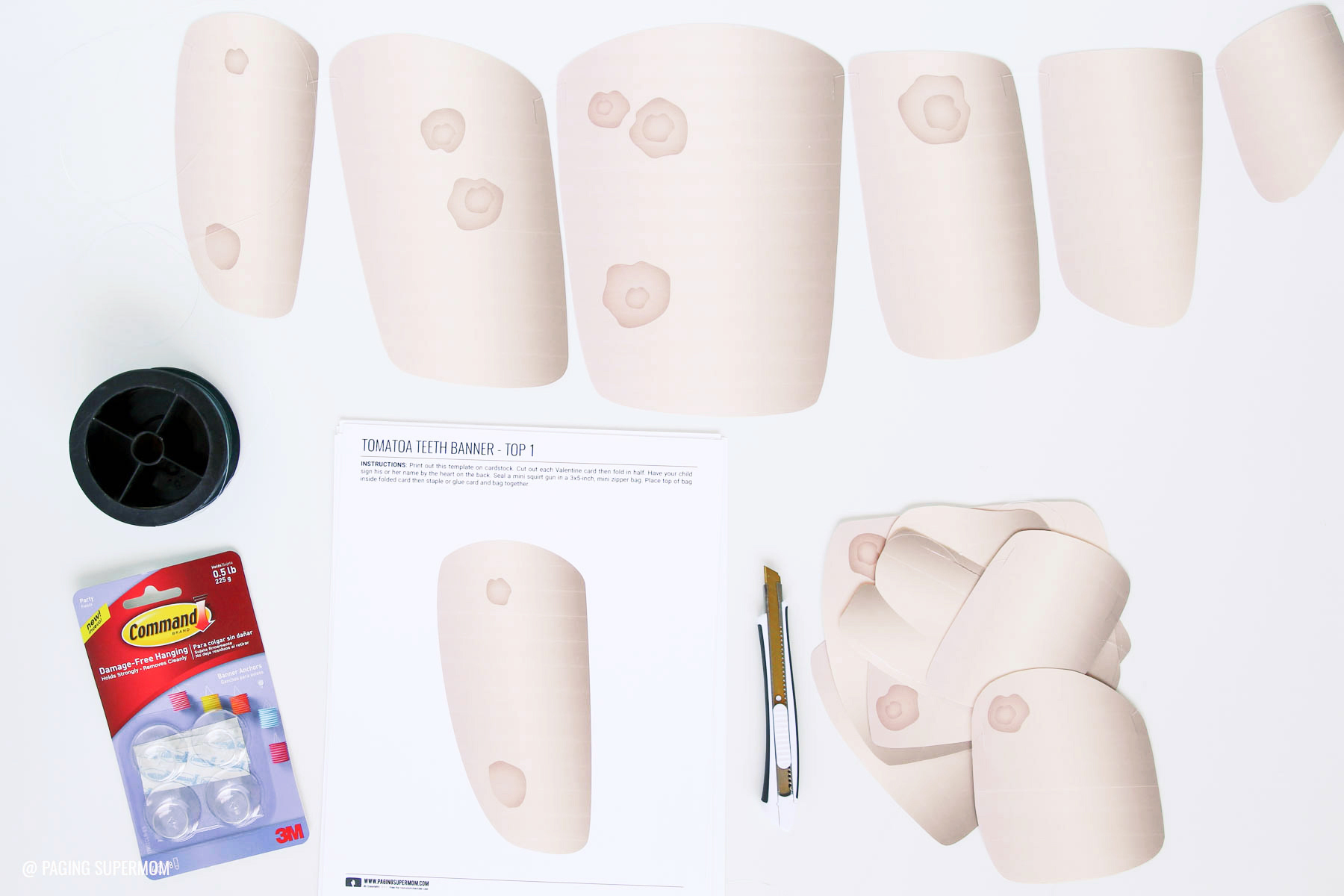 MAKE THE SMILE: Next create Tomatoa’s toothy grin by assembling my free printable Tomatoa Teeth Banner. I included two different templates in my Tomatoa Party Printables kit. The first one I created was too small, but I still included it in case you wanted to make your Tomatoa table with a smaller, 4-foot folding table. To download the free printable Tomatoa Party Kit just fill out the form at the end of this post.

Print the template on cardstock then cut out each tooth. For the top row of teeth, create half-inch slits on the top left and right sides of each tooth. For the bottom row, you actually want the teeth to hang so they line up along the bottom instead of the top. This is a bit tricky to accomplish since the teeth vary in size.  I laid the bottom row teeth out, lining the bottoms up. I found the top of the shortest tooth and created slits at that height. Then I used this as a template for the slit height on all the bottom teeth. (So on the bigger teeth, I was actually slitting them almost halfway down.)

Finally, line up both rows of teeth in order, then string onto two separate strands of fishing line. I hung them on the table using the Command Party Banner Anchors. I used to dread hanging banners on the front of tablecloth-covered tables, but these banner anchors adhere to the tablecloth and make this chore a breeze.

Isn’t he cute? I just love the Giant Tomatoa Table it really made this Moana Shiny Party! 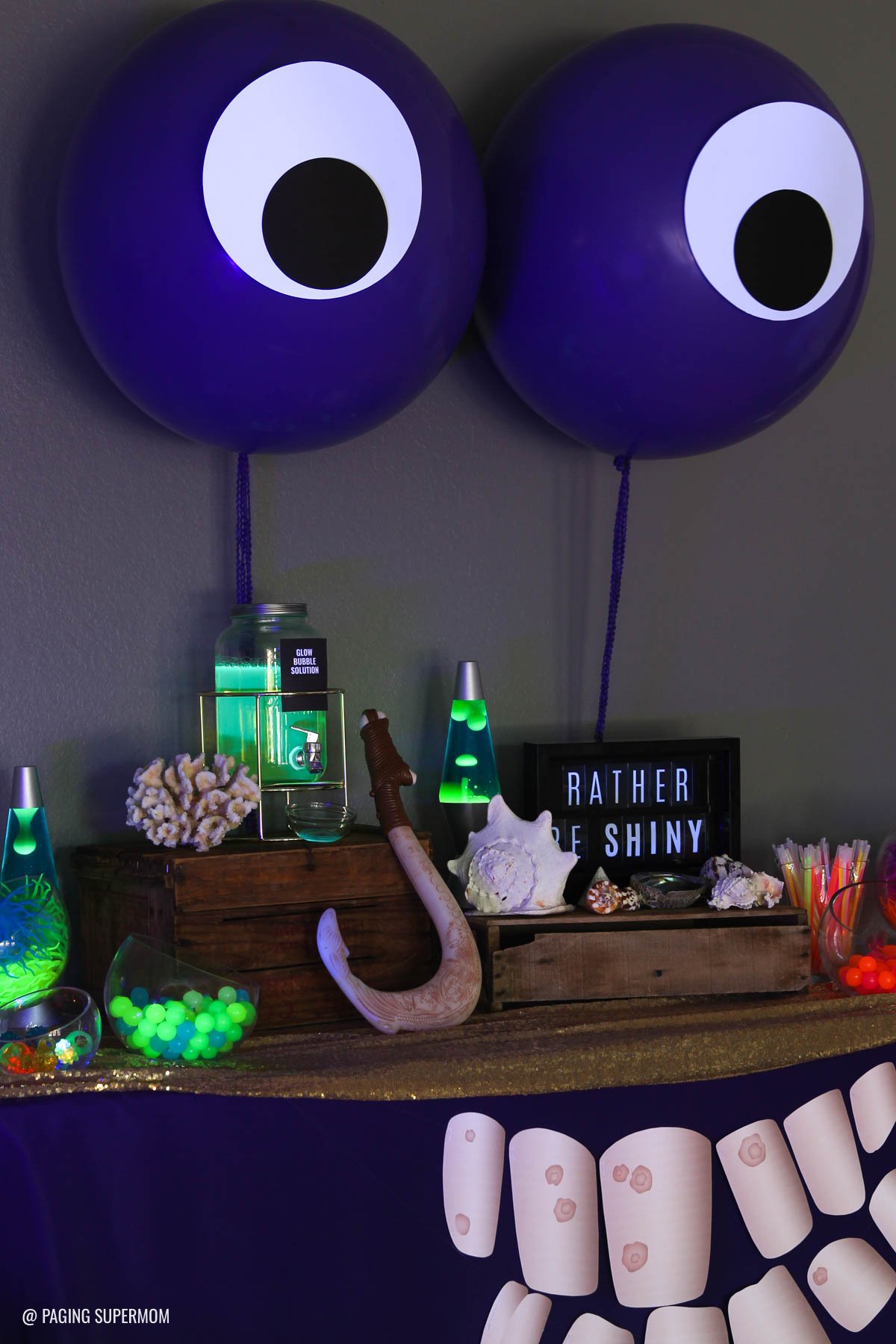 Be sure to check out my Ultimate Black Light Party guide for recommendations on the best blacklight to use; to find out what foods will glow in a blacklight; plus which blacklight party favors are the best bang for your buck.

I topped the Tomatoa Table with all our fun blacklight goodies. When I first setup the table I had the toys in containers with all the colors mixed, but it was looking so messy. By dividing the cool and warm colors on separate sides, it looked SO much better.

This Tomatoa Party is one situation where my go-to white serving pieces just didn’t work. The white detracted from the gold tablecloth, so I went with clear glass serving pieces instead. I love these Crate & Barrel Tilt Bowls, which remind me of barnacles, and this small Evelyn Vase. I used the two smaller Tilt bowls with this similarly style slanted footed bowl from JoAnn.

I added several seashells and coral pieces to complete the display. With the bubbling lava lamps, and glass bowls filled with all my glowing goodies, the table looked like something that belonged under the sea in the Realm of Monsters!

Old antique crates looked right at home on Tomatoa’s gold back, and I rested on it this Maui Hook toy, that lights up and makes noise. I figured the glowing bubbles would be a hit, so I made it easy for kid’s to refill their bubble containers by serving up extra Bubble Solution in a beverage dispenser. Be sure to check out my easy tutorial for how to make DIY Glow Bubbles. 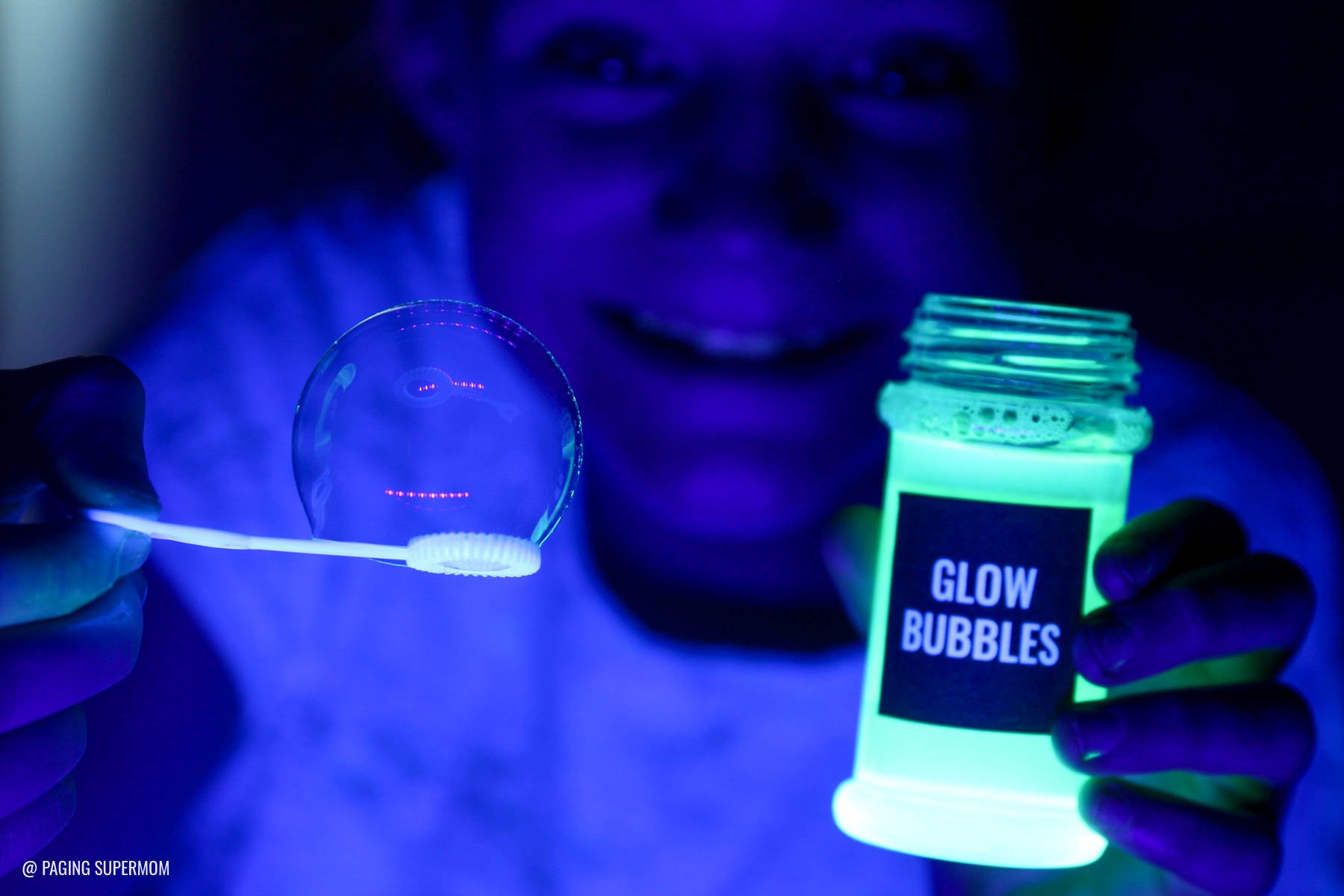 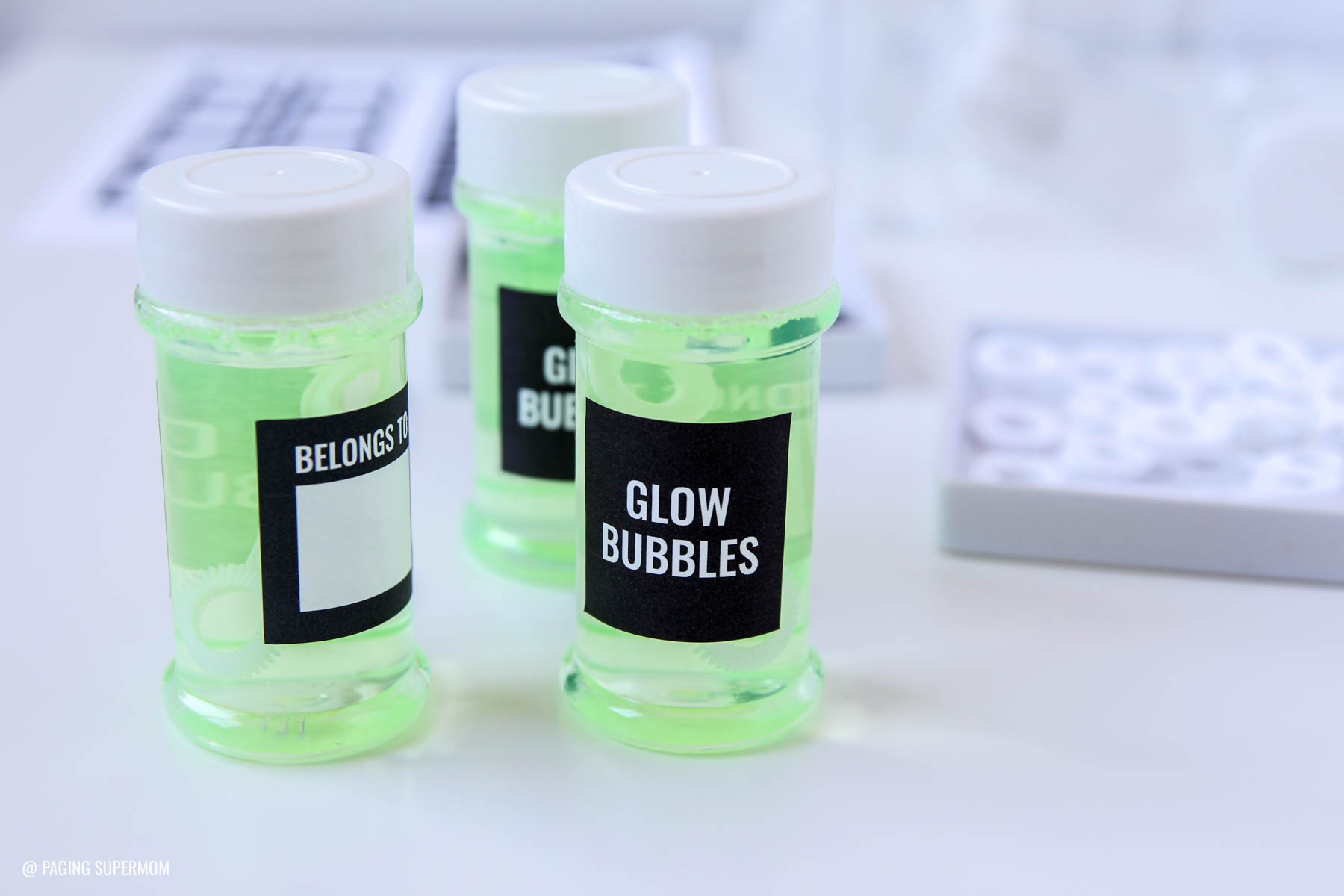 I created editable party food tag for the Tomatoa Party, and the file is included in my free Tomatoa Party Printable Pack. You can type on them in Adobe Acrobat then print out on cardstock. I used these gold glitter placecard holders to display my signs. Fill out the form at the end of this post for instant access to the printable pack. 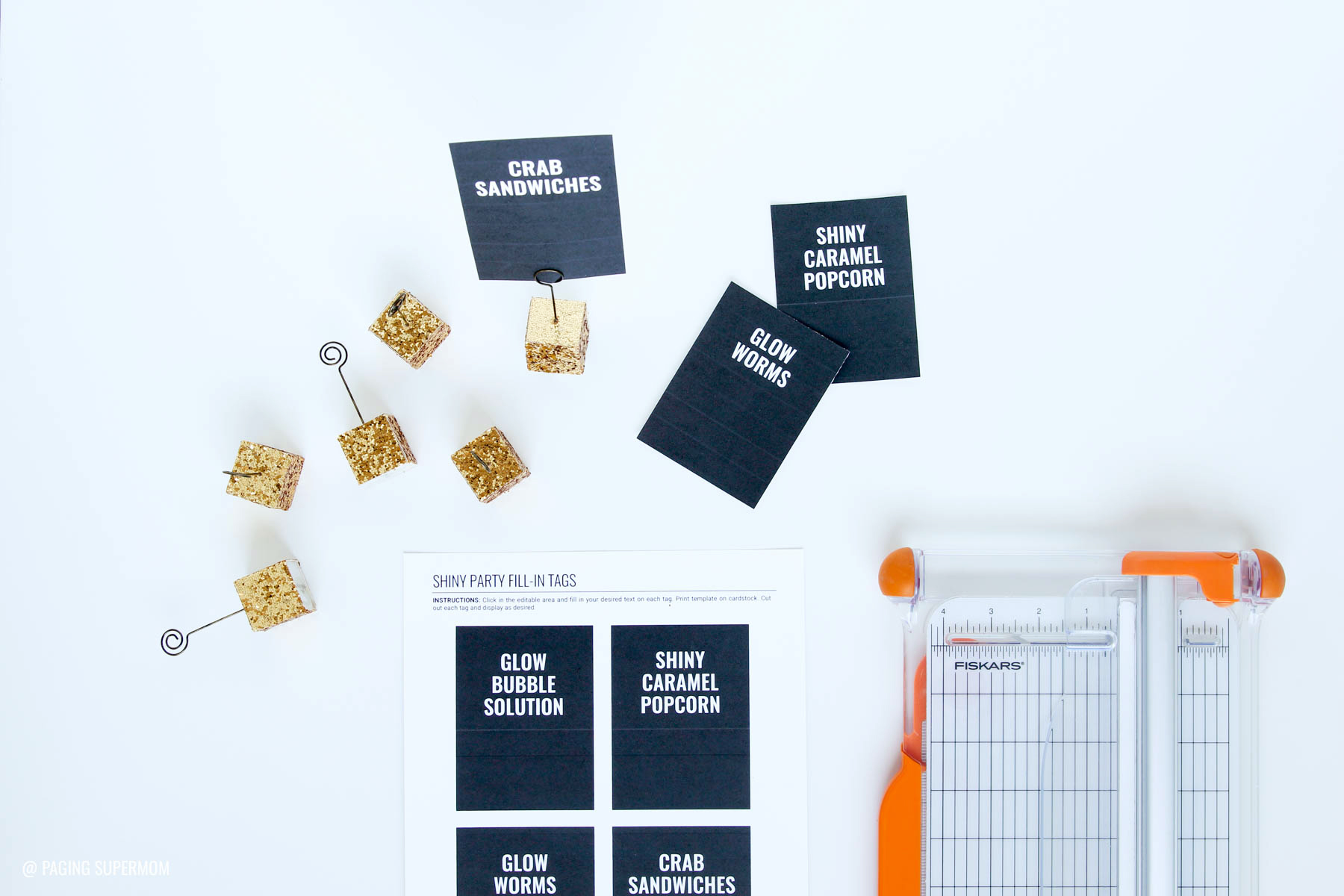 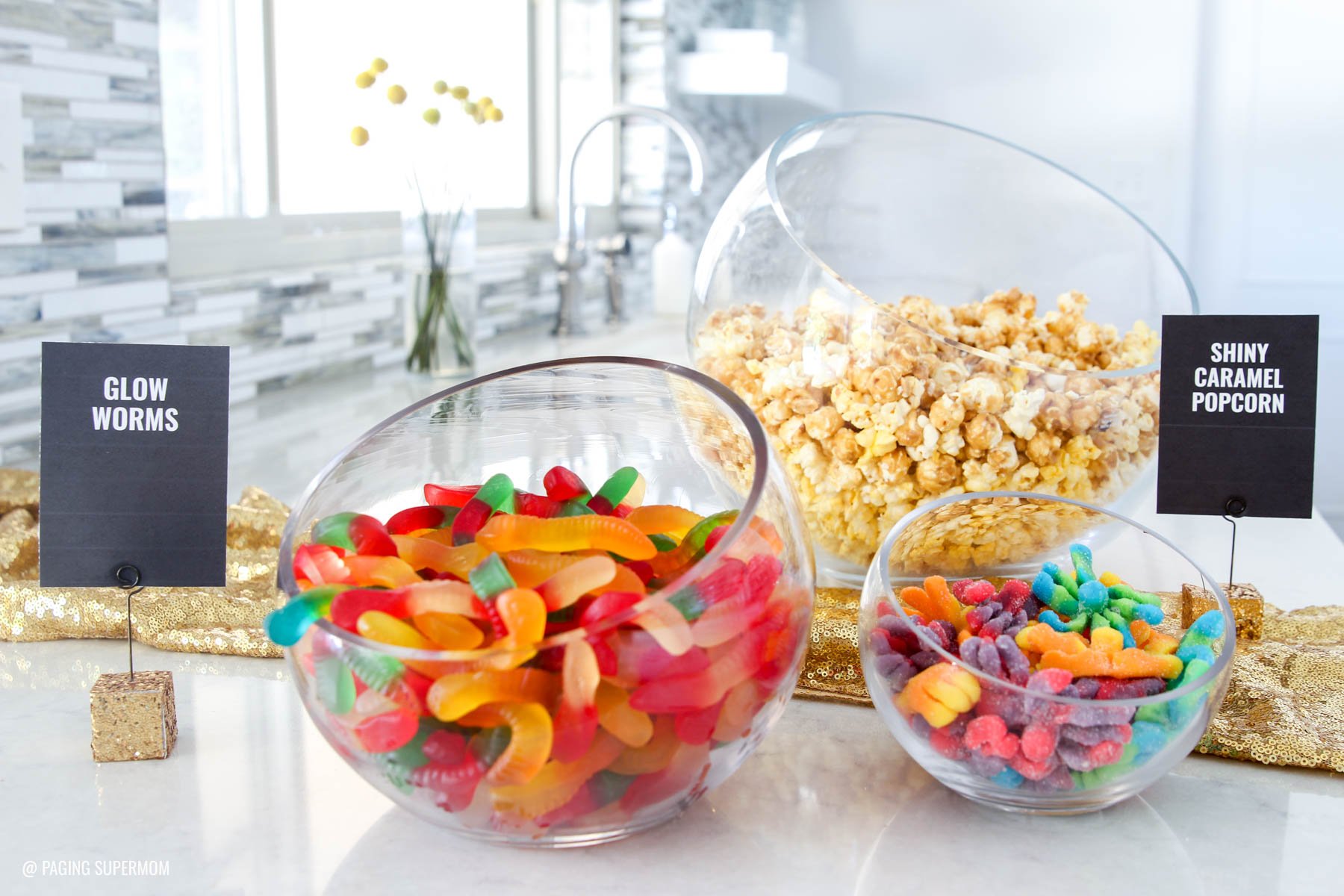 Gummy worms will glow under a blacklight, so I served them up at our Tomatoa Party along with sour octopus candies (a couple of these colors on these glowed too). For more glowing food suggestions check out my Glow Guide.

We also had caramel popcorn with nuts, which reminded me of the haphazard collection of gold goodies on Tomatoa’s back. For a healthier snack, we had Crab Croissants, filled with tuna salad…