For this Emoji Party I actually made THREE emoji banenrs! I had two hashtag banners: the “#OHBABY” banner hung on the fireplace, and a “#DIAPERDUTY” banner hung above my kitchen window seat. Then I made a third banner with all the emojis strung together that I hung across another wall. I also clipped a few of the emoji icons onto the hashtag banners just for fun. You can get all the Emoji Baby Shower Banners in the Supermom Co-Op. There’s also a “Happy Birthday” Emoji Banner in there too because I think most of these emoji party ideas would be super fun for a birthday — Emoji Sweet 16 party, anyone? 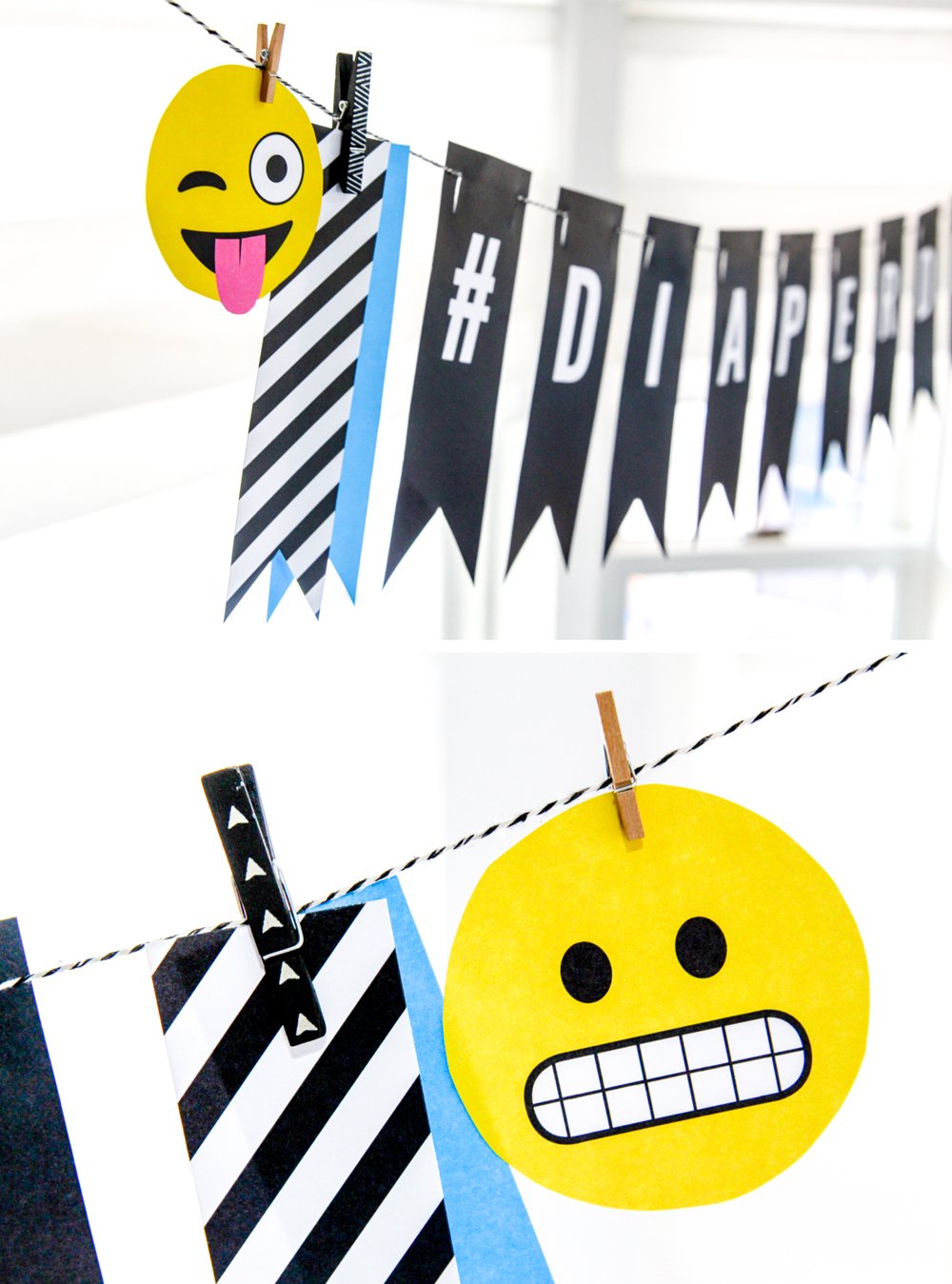 I offered guests at the Emoji Baby Shower a few healthy food options, and then of course there were delicious emoji sweets! These Emoji Water Bottle Wraps were a big hit, and in the “Sources” section below you can download the free printable food tags that I used. I figured out how to make the file editable too, so you can fill it in with the foods you’ll be offering — YAY! 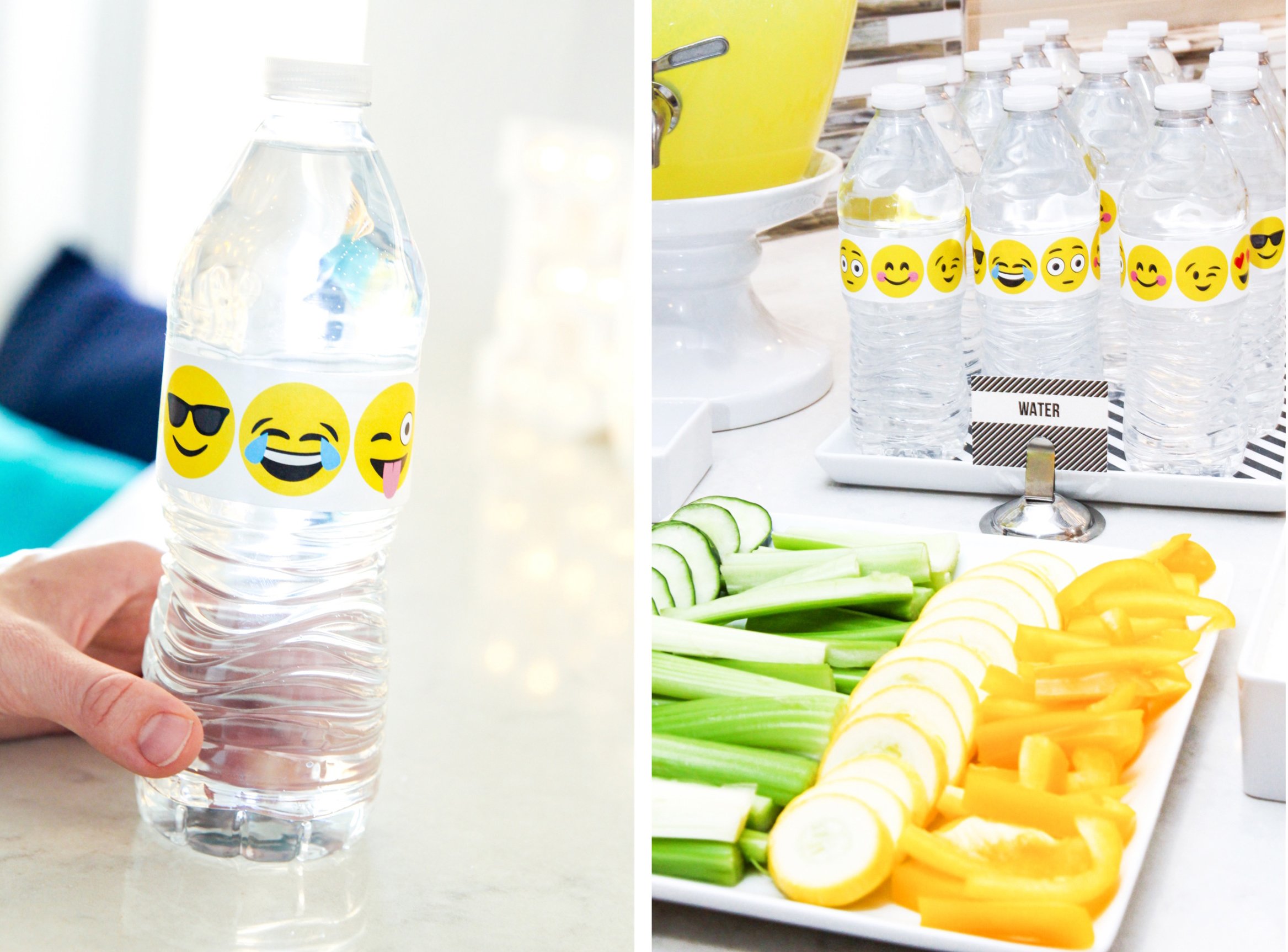 Of all the emoji party ideas I brainstormed, I knew we absolutely had to have Emoji Sugar Cookies for this party. I thought about making them myself for about a minute, and then I realized that there were too many colors of frosting (the more colors, the more difficult the cookie is to make, just FYI). Since I really wanted these to look like actual emojis, I figured I had better leave the cookie decorating to a professional, LOL! I’m so glad that I did! 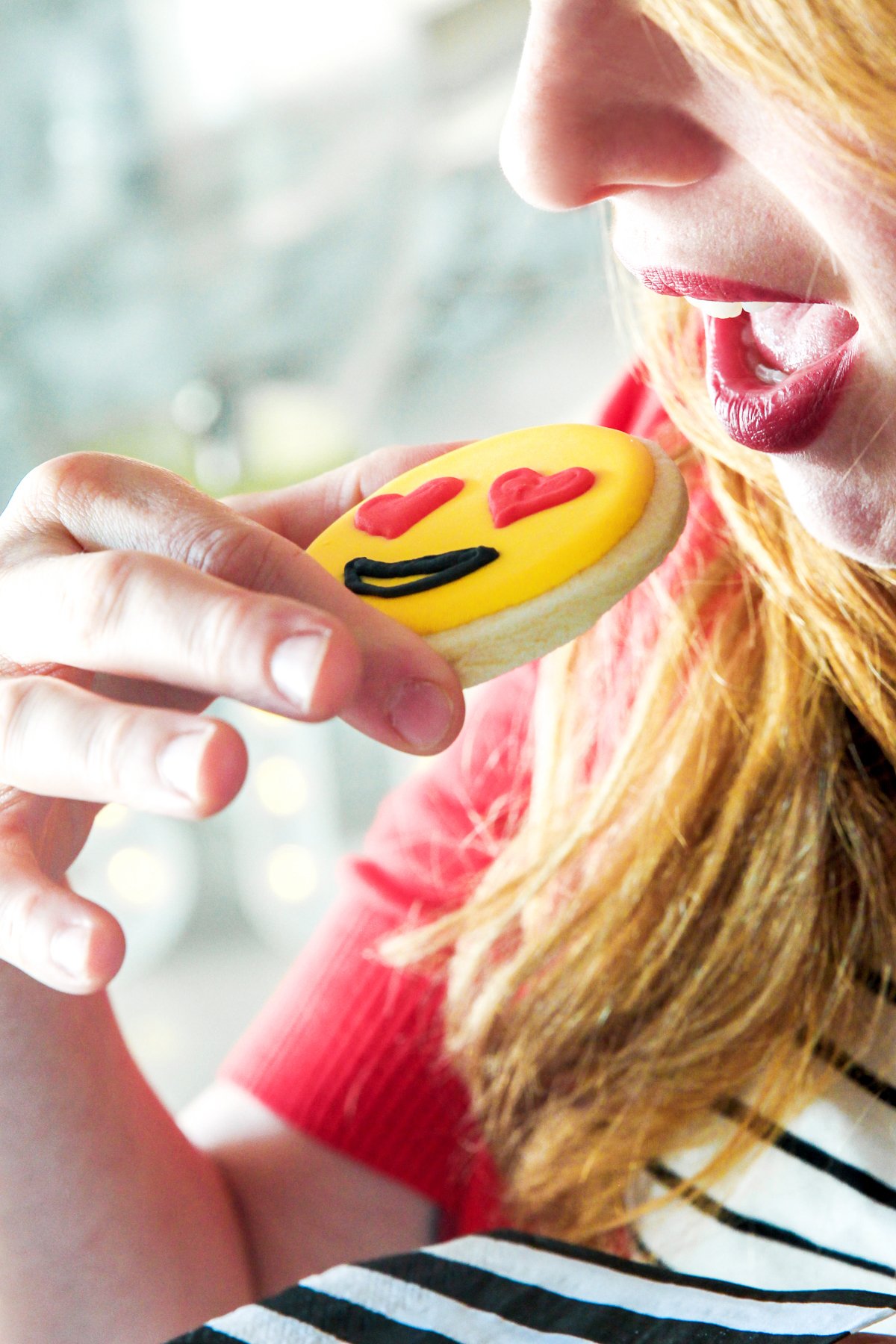 I found Julie of The Sweet Life Cookies on Etsy, and she was game to help me out. Even though I was planning things fairly last minute, she created these fabulous Emoji cookies, wrapped them up so neatly, and shipped them to me just in time! I also am so impressed that not a single cookie broke in transit. Her cookies were adorable and yummy too… I had to hide the Emoji cookies from my kids so there would be enough for the Emoji party!

I ordered chocolate cupcakes from a local bakery, and specified that they be frosted with a smooth tip. Then I added large candy eyes, transforming them into perfect Poo Emoji cupcakes! 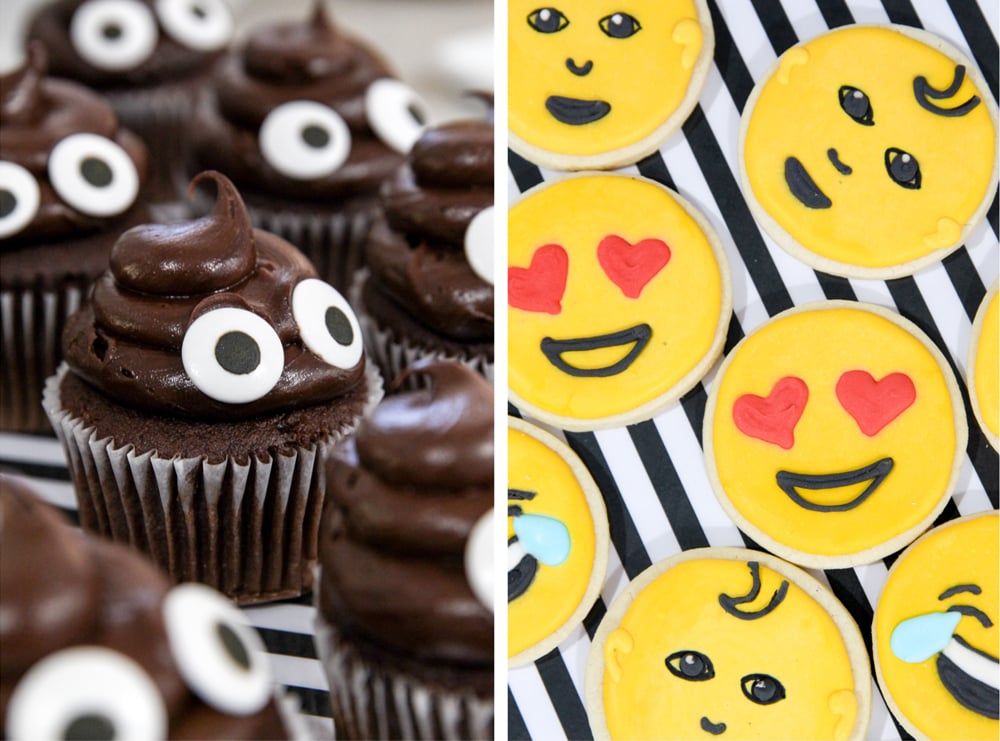 If ever there was a baby shower that needed a diaper cake, this Poo Emoji Baby Shower is it! I’ve actually never made a diaper cake before, and I read a few tutorials. I really liked this one, but I used a bottle of sparkling cider instead of the oatmeal container. Another tutorial suggested a paper towel roll, and really any of those would work. I think the diaper cakes work best with plain white diapers like these from The Honest Co. The Pampers Swaddlers are almost all white, and you can use those with the front facing in. You’ll need about 100 diapers for your cake, and I used diaper size 1.

OR I just discovered that you can actually buy a Pre-Made Plain Diaper Cake and decorate it yourself. It’s really only about $20 more than the cost of the actual diapers and would be a pretty big timesaver. 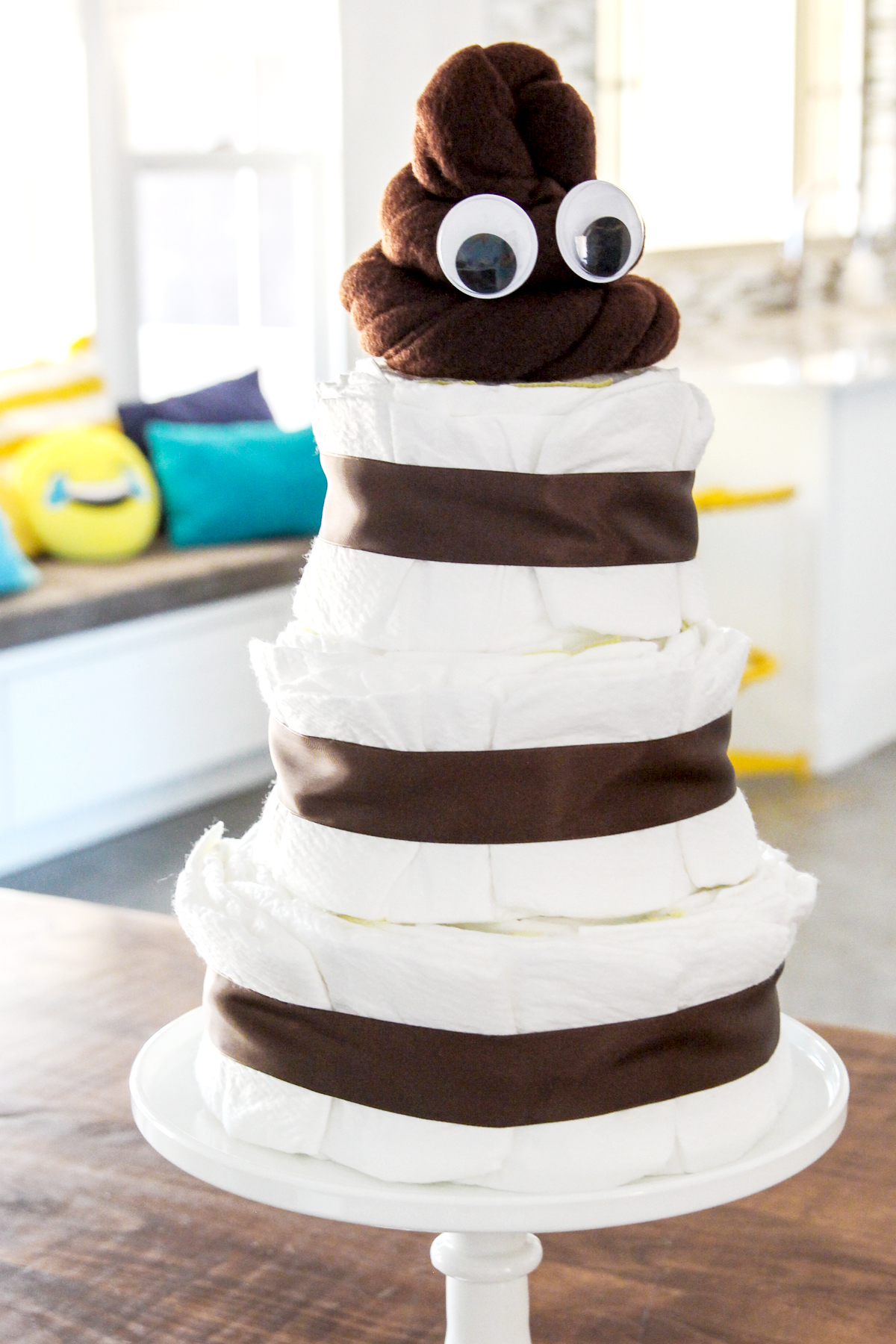 I kept the Poo Emoji diaper cake decorations pretty simple, and just added wide brown grosgrain ribbon around each layer that covered the rubber bands that are holding the diapers in place. I created the Poo Emoji topper using a quarter yard of brown fleece. I took two opposite corners and started twisting it up like a snake, then I coiled it up on top of itself to create the correct shape. I used a glue gun to secure it in place and glued on two 1.5-inch googly eyes. 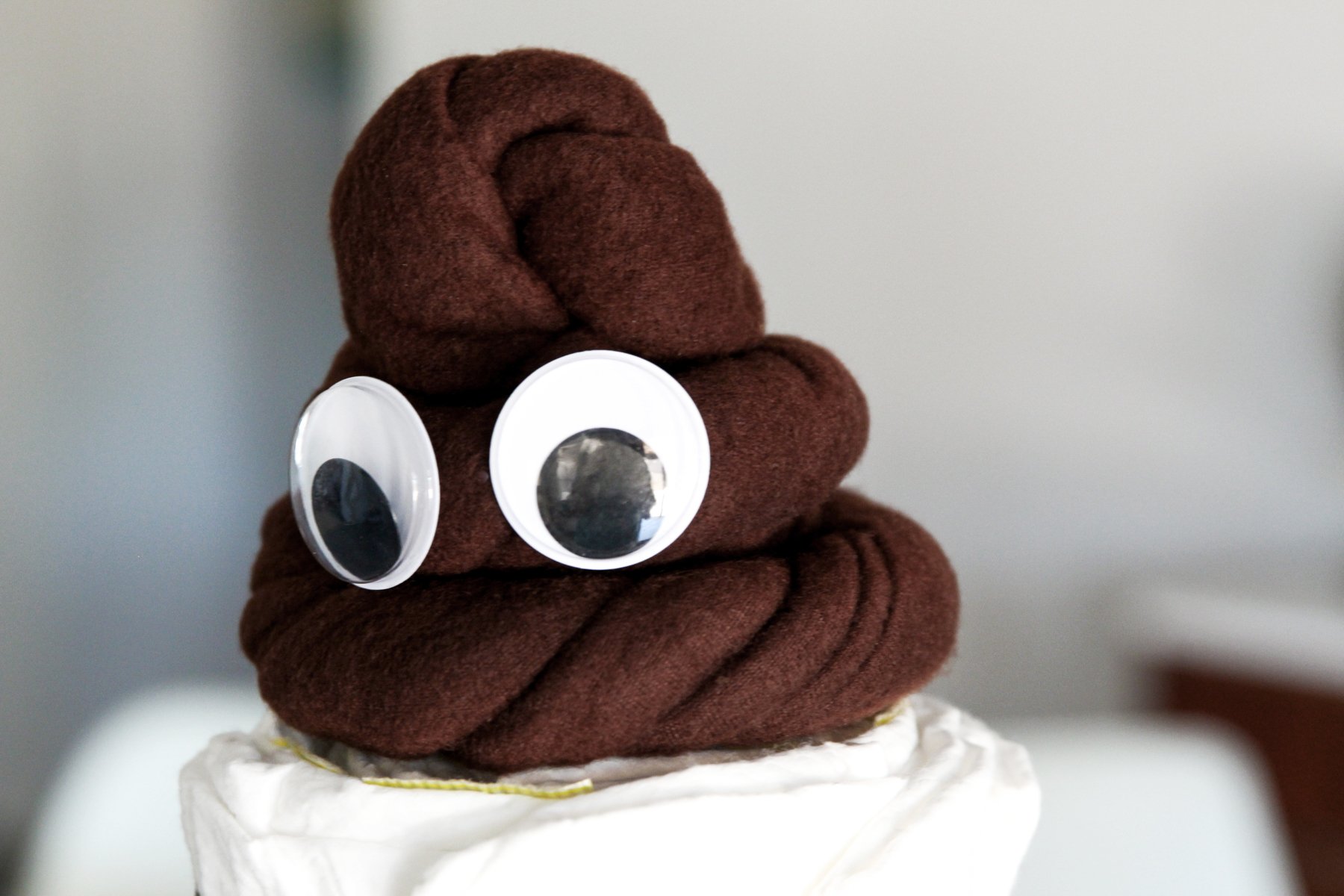 I’ve heard of this diaper guessing game at baby showers with various things smeared in the diapers. I’ve always thought it was pretty disgusting, but it just seemed too perfect for a Poo Emoji Baby Shower….